Stop Robbin’ the Poor - Notts says NO to Trident!!

Following the resignation of two government ministers and the rebellion of nearly a hundred labour MPs over the renewal of Trident nuclear weapons, around a hundred Nottingham residents are planning to travel to Scotland to protest against the replacement of Britain’s Trident Nuclear Weapons. 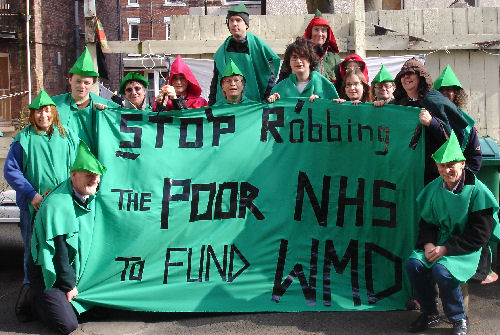 Faslane 365 is a year long international protest against the deployment and replacement of Trident. The Nottingham group will be playing their part by aiming to prevent access to and disrupting the base over a two day period, 31 March to 1 April.

A number of fund raising events have helped finance the event and demonstrators have received training and legal advice in case of arrest at the site’s gates. Jeannie Thompson, a Nottingham resident, said: “It is appalling that the government wants to spend £75bn on renewing nuclear weapons; not only would this be a colossal ethical and financial blunder, it is also hypocritical for the UK to insist that countries such as Iran cannot develop nuclear weapons when the UK is renewing its own weapons system.”

It is very exciting to be part of such an enthusiastic protest movement. I just hope the government is listening.”

Nearly sixty demonstrating groups have already travelled to Faslane in the last six months in protest at the Trident nuclear weapons replacement proposals.

There will be photo and interview opportunities before the group’s departure from the Sumac Centre on Friday March 30th at 9.45am (245 Gladstone Street, Nottingham, NG7 6HX).

1) Faslane 365 is a one year continuous peaceful blockade of the Trident base at Faslane from 1st October 2006 to 30th September 2007. Faslane 365 is asking a wide range of local, national and even international groups from all sections of civil society to come to Faslane with at least 100 people committed to stay and make their visions for a just and peaceful future visible for at least two days.

2) Nottingham Faslane 365 is a loose association of individuals committed to providing 100 people to peacefully blockade Faslane, and to support this pledge by co-ordinating all aspects of a Nottingham blockade, including transport, legal support, non-violent direct action training, fundraising, accommodation, catering....

3) For photos/info/video from other Faslane 365 blockades so far see www.faslane365.org