Yesterday (27 March), nine activists trundled along to Horseferry Rd mags to answer two charges relating to the blockade of Parliament Square on 14 March - the day of the parliamentary debate/vote on replacing Britain's WMD. 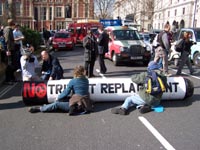 The nine had been arrested following a successful blockade of the Square from 11.30am on the day of the vote (see previous imc coverage:

http://www.indymedia.org.uk/en/2007/03/365127.html). All had been charged with obstructing the highway and particpating in an unauthorised demo (SOCPA)

For once, the stipendary magistrate was positively helpful (mostly) and the five who had decided to go guilty (for various tactical reasons - including wanting to be free to commit more "crime" ), basically walked - after being given £50 fines against each charge and then having it instantly wiped against "time already served" in the cells.

No costs for the (completely useless) CPS (who had muttered something about people sitting in the road holding hands next to an authorised demonstration.... at which the stipe's "good grief" expression said it all).

The four who opted to go to trial will have their date set in a fortnight.