The Space Hijackers held a corporate brainstorming session at Reclaim The Future 4. Entitled "Relaunching the Mayday Brand" we hoped to stir things up a bit and encourage a rethink of activist tactics, attitudes and attire for this years mayday. 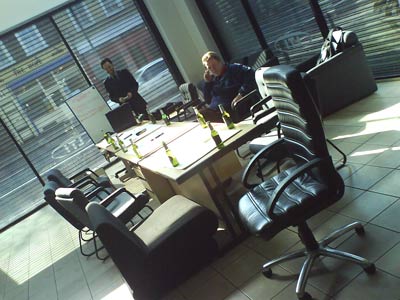 Setting up our boardroom 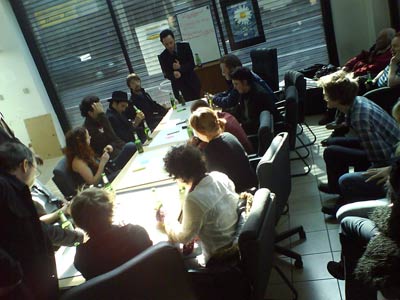 Greenman at the head of the table 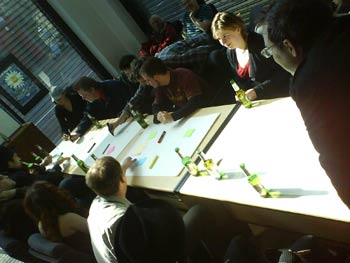 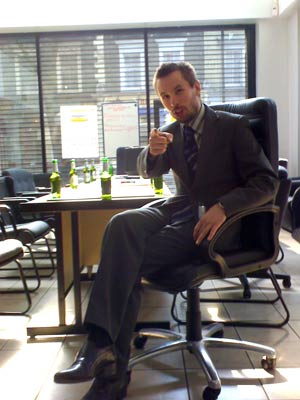 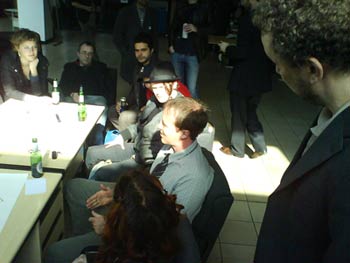 Nutroast looks over the word games

Hijacker agent Mojococo had approached us about putting on a workshop in the afternoon before the party kicked off, So in true Hijacker style we decided to buck the trend of anarchist events and attempt to host a corporate brainstorming event to relaunch mayday. Just to wind people up a bit (and try to get people thinking outside of activist talk) we called our workshop:

Agents Greenman, Nutroast and Bristly Pioneer (me) all turned up dressed to the nines in slick suits, the rest of the attendees at RTF unfortunately were not quite up to the corporate image we hoped for. So in order to prepare for our workshop we took a quick detour to a local charity shop to buy a selection of ties for our guests. We also stopped off at a local wine wholesalers to get a couple of crates of beer to help things along (this was a Space Hijackers event afterall).

Greenman had brought a briefcase packed with post-it notes, felt tips, colured paper and cards along with a roll of big sheets of paper, I had also brought the Hijacker white board, so we were well prepped for our team building workshop. As is to be expected with anarchist events, things were running a little behind schedule when we arrived so we had a little more time to scout the area and work out how best to run our workshop. Greenman scavenged a selection of tables and chairs from around the venue and set up a very official looking board room by the front windows facing onto Holloway Road. By this time a police CCTV van had been posted outside the venue and was busy trying to film inside, we thought it would be perfect for them to look back over their tapes of the activist event, only to see a group of men in suits sitting at a boardroom table!

We laid out a free beer for the atendees and then went around the venue announcing the workshop was about to begin. Around 30 people turned up and took a seat aroudn the boardroom table. Greenman handed out ties to as many as possible and we eplained that in order to participate in the workshop you had to keep drinking beer. It is a long established hijacker tradition to get as drunk as possible in our meetings as we often find this produces the best ideas.

Just as everyone was settled and opening their beers, we asked them all to stand up, leave their drinks and head into a small adjacent office. Before hand we had been looking for a suitable "ice breaker" activity to gel and enliven the group, and during our scout of the building we had found this office, which was probably no more than 9ft x 6ft. I lead everyone into the crammed room, and with the last person in, Greenman and Nutroast closed the door. Bristly then encouraged everyone to scream as loud as possible in the tight space, meanwhile Nutroast, Greenman and a couple of helpers banged as hard and noisily as possible on the windows and walls surrounding us. It soon became very uncomfortable in the room and I asked everyone to leave. Lo and behold they discovered Greenman had padlocked the door closed and we were trapped! A fresh bout of screaming shouting and banging on the walls ensued and eventually we were let out. As people were leaving, slightly disorientated we welcomed them "Out of the box" (geddit?) and explained that todays workshop was all going to be thinking outside of our usual anarchist, activist and protestor methods. Oh yes our corporate speak was now in full effect.

Greenman took to the head of the table and our workshop truly began, he asked everyone to take a pen and write down single words which the idea of Mayday meant to them. Meanwhile Nutroast and I circled the table commenting on the words and encouraging people to drink more.

A whole mix of things came up and we asked people to talk about the words they had used, we talked about how Mayday had been declining over the last few years due to police troublemaking and pressure, we talked about how the police tactics had evolved since J18 and other events to learn to deal with activists, and how our tactics had failed to move on. We talked about the right wing and their attempt to hijack mayday with a fascist march for english justice this year.

After this we looked at the history of Mayday as a fertility festival, we looked at the Haymarket Martyrs and how the date had become linked to socialist and anarchist struggles. All this time we used a series of corporate techniques and methods to encourage the brainstorm, and marked things up on our white board and sheets of paper.

Next we looked at potential futures for mayday, and began to look at tactics, and events which we could use to reinvigorate the brand! Unfortunately we can't write about this part here as we intend to use these tactics on upcoming events.

All in all it was a very successful workshop and something we would like to use again in similar events. I don't know if all of the activists were entirely comfortable with our approach, dress sense or attitude, but we certainly managed to stir things up a bit and enliven the debate.