Update: The RTF4 building was illegally evicted and a meeting cancelled on Thursday, 5 April, by private security backed by police.

Four months after the acquittal of the Coronet Five, police again sealed off Holloway Road and provoked a pointless confrontation with people attending a major event on the social calender of the anarchist movement. [Pics: 1 | 2 | video]

The setting this time was Reclaim The Future 4, a networking event which combined workshops, info stalls, cinema screenings, a vegan cafe and party, and was attended by hundreds and hundreds of people [Pics]. The event was held in a squatted building on the Holloway Road, which was formerly a workshop and salesroom for London Taxis. 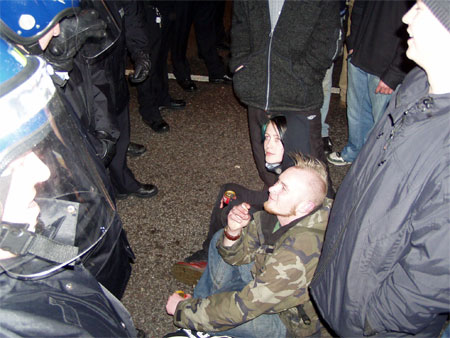 That the police were not happy with the event became clear early on the day. The event was scheduled to start at 1.pm and at 1.03pm the first police car arrived. It hung around for a while, while the building began to fill up as more and more people arrived. A while after it left, a CCTV van stationed itself across the road from the event, presumably filming people as they arrived for workshops, including a rather chaotic Boardroom Planning session.

Police cars parked up every now and again, and then the CCTV van drove off. Within minutes more police cars arrived with a fireman in a fire service vehicle. The fire officer wanted to inspect the actions, including the sealing off of a room in the centre of the building which also contained most of the toilets. Frenzied activity followed and the event was brought into compliance with hi instructions. By now the building was getting very busy indeed, as hundreds of people ate, attended workshops, helped set up for the evening, or sat around chatting.

Following the departure of the fire officer, the CCTV van returned and stayed outside till darkness fell. Music and cabaret started up in different rooms, and the atmosphere was relaxed and calm. At about midnight, the stream of people at the gate suddenly dried up as a row of police officers declared that they weren't letting anyone else in. Someone tried to scale the fence and was dragged back and roughly arrested. Unbeknown to the police, people then found a way in over a high wall at the back, and others came in over the roof.

Confusion reigned inside, especially when several vans turned up, with hordes of tooled up riot police arrived. The riot cops then started pushing people from the outside of the gate down Holloway Road towards Holloway tube station. Holloway Road was blocked off and stayed closed for about 3 hours, whilst a steady trickle of people began to leave the event. Others declared their intention to stay until the end.

Although there were rumours that the police intended to seize the sound systems, they were packed up at about 3.30 and left. No rigs were reported to have been seized, and most of the police eventually got into their vans and drove off, allowing the road to open once again.

It remains unclear what the police hoped to achieve with their demonstration of force. At all times they were hopelessly outnumbered, and their most significant success was the rerouting of hundreds of motor vehicles from a busy road.A number of arrests were made, and one arrestee is believed to have been released with a spot fine for an offence under Section 5 of the Public Order Act. It is likely that a significant amount of public money will be spent on trials for some of the arrestees, and it is not unforseeable that convictions will fail to materialise at the end of the process.

For many a real sense of deja vu.