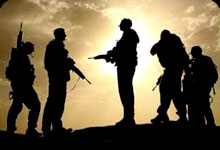 Not constructive at all

Leo Docherty, who formerly served with British contingent in Iraq and Afghanistan, described war in these countries as political and military slaughter.

Docherty noted that war in Afghanistan has been a major element in the emergence of hardline movements and a general sense of discontent among the locals.

He further said that British troops based in Afghanistan are sacrificing their lives for what can be described as a "doomed project".

Commenting on the war in Iraq, Docherty emphasized that when U.S. army launched its campaign against former Iraqi dictator Saddam Hussein in March 2003 none of the commanders in Britain or U.S. believed that Iraq had secretly made and stored nuclear weapons.

Docherty was fired from the army about six months ago for breaking army's code of silence through attacking the U.S.-led war in Iraq and Afghanistan.