peace activists milan rai and maya evans were at westminster magistrate's court this afternoon to answer charges of organising an 'unauthorised' demonstration in parliament square last october. for failing to give their dates of birth at the start of the trial, they were both held on 'contempt of court', and now a new hearing will happen on friday 20th april at 9.30am. 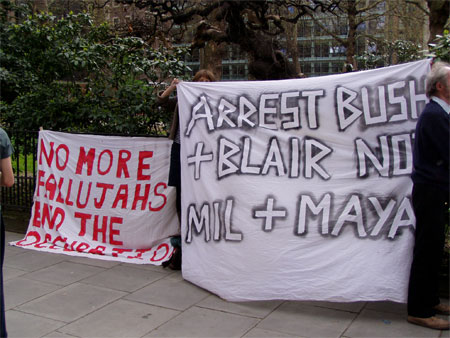 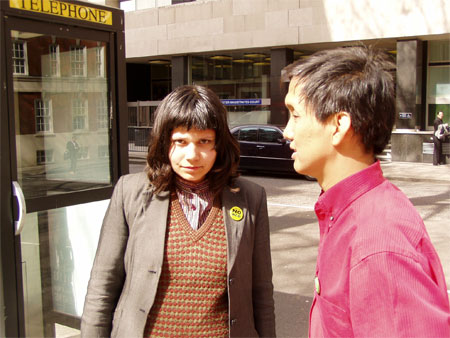 maya and milan before trial 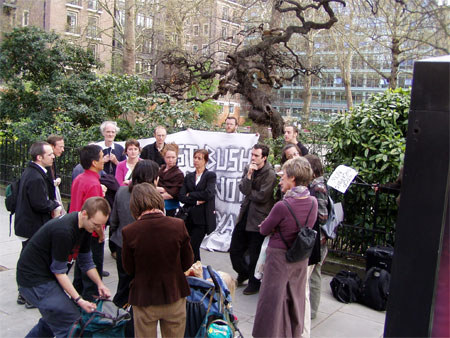 supporters after the hearing

milan and maya arrived at court today while a couple of dozen supporters staged an impromptu demonstration opposite the court.

they were there to answer charges of being organisers of the 'no more fallujahs' 24-hour peace camp in parliament square last october.

they had several defence witnesses lined up (fellow organisers who had not been charged), and both were representing themselves in court.

at the start of the trial, they were both asked for their names and dates of birth. although happy to give names, both argued that they were not willing to give birthdates as it was unnecessary in law and because it effectively changed the relationship between state and citizen. it also allows authorities to connect databases.

the court clerk and the judge both affirmed that the two were required by law to give this detail, but milan pointed out that on a previous socpa conviction (as organiser of the 'naming the dead' ceremony opposite downing street in october 2005 -

http://publish.indymedia.org.uk/en/2005/10/326413.html), he had been tried and convicted without having to give these details, but if this particular court had a different view of the matter then he would accept the consequences.

well judge newton was not a happy woman, and so she called for the serco guards. the court sat in silence for several minutes while she looked more and more uncomfortable under the gaze of a couple of dozen supporters. as the public gallery was overflowing, several supporters were sitting in the small court bemused at this turn of events.

eventually a small phalanx of guards rushed in, and they had trouble identifying the suspects - perhaps they expected violence or abuse rather than the gentle co-operative pair they found.

court was adjourned for nearly an hour. a duty solicitor was assigned. milan and maya (in the cells) refused legal advice or representation, and when the court sat again, they stuck to their course.

judge newton called a hearing for 'contempt of court' for friday 20th april.

it is to be hoped that the proceedings don't begin with a request for their dates of birth, or we'll be into a strange legal/logical groundhog day scenario.