Australia: Call for skilled migrants to be sent to the ADF 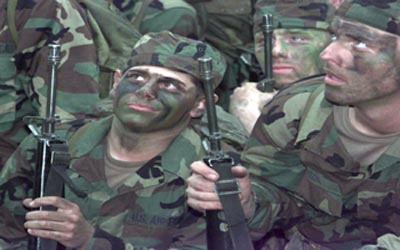 Chronic shortages in the Defence

The Federal Government is under pressure to import 20,000 skilled migrants from overseas to join the Australian Defence [WAR] Force (ADF).

Its plan to import 20,000 skilled migrants from overseas.

"No capitalists, politicians, landlords, newspaper editors, or any other stay at home nationalists have applied. So I've decided to import them from overseas", he said.

"No one wants to kill these days."

"The Prime Minister says he's in favour of bringing in migrant workers to help ease Australia's recruitment shortage in the ADF.

"But US President George Bush says he needs the migrants just as much as Australia, and he'll raise with John Howard an idea to gear the scheme to target third world countries."

"Target it to some of those poverty specific areas that have a need focus.

"Have a points system: give people higher points if they commit to the SAS."

"But Mr Bush says the migrant push won't help to win the war on Iraq now because the current recruits are struggling to fill posts not only in Iraq but in Afghanistan.

"For that he says the Australian Government must consider a formal short-term international migrant exchange program.

"Labor's Kevin Rudd says a family reunion scheme where overseas migrants can bring their families to Australia should also be considered to help attract military recruits."

Time to go to war with your country?

Unemployed to be offered jobs in war forces. She says the scheme will provide opportunities to unemployed people who would not otherwise have considered a job in the ADF?

Unemployed to be offered jobs in defence forces

Employment service providers will be encouraged to work with the Australian Defence Force (ADF) to help more people take on a military career.

US pays $40m for civilian deaths

The US Army says the military has paid at least $US33 million ($40 million) to civilians in Iraq and Afghanistan for wrongful deaths and injuries.

Two NATO soldiers were killed in separate explosions in Afghanistan, as US-led warplanes and soldiers killed 24 Taliban hiding in caves in the south, officials said.

Iran has condemned the suicide bombing attack on the Iraq Parliment buliding that killed two MPs as inhuman and satanic, the official IRNA news agency has reported.

A suicide bomber blew himself up at the Iraqi parliament in Baghdad's Green Zone, killing eight people including at least two MPs in a staggering breach of security at Iraq's most heavily guarded site.

Prime Minister Nuri Al-Maliki has condemned a suicide attack inside Iraq's parliament building that killed three people including at least two MPs as a "criminal and cowardly act".

President Pervez Musharraf says that Pakistani tribesmen have killed around 300 foreign Al Qaeda militants near the Afghan border and admitted that the army had helped the tribal fighters.

The bodies of four British soldiers killed last week in southern Iraq have arrived home, receiving military honours in a ceremony at an Royal Air Force (RAF) base in southern England.

An explosion has occurred in a canteen in the Iraqi parliament complex inside Baghdad's heavily fortified Green Zone.

Where was the opposition to Social Services Reform? Desperate and disabled to work? 6 week social security payments cut off's? Work for the dole instead of not getting better education and skills for better employment opportunities?

Where was the opposition to rorting the social security system by corporate greed?

Where is the opposition to war?

The ANZAC myth has become an integral part of Australian folklore, as the last living witnesses to the carnage that occurred cannot personally challenge the idealised sanitised accounts that are being trotted out each ANZAC Day...