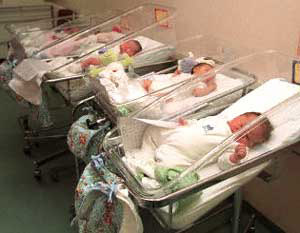 The Federal Government's maternity payment of $4,000 per baby will rise to $10,000 per baby if parents arrange for their early enlistment in the Australian Defence [War] Force (ADF).

Treasurer Peter Costello says the Government has spent more than $440 million on the baby bonus program so far but now we need to help fill chronic shortages in the ADF.

Peter Costello says, "No capitalists, politicians, landlords, newspaper editors, or any other stay at home nationalists have applied so we are trying to ensure we don't have that problem in the future."

"A lot of parents aren't aware of the changes in our criteria, for example you can now be a cadet at age 7, up to 55, you're no longer necessarily barred from joining just because you still suck your thumb" he said.

Mr Costello says the baby bonus grants have been warmly embraced by new mothers and the payments are helping to stop the decline in Australia's birth rates.

Now he wants to work on the decline in the Australian Defence [War] Force.

"Many of the hospitals around Australia are now reporting an increase in the number of births," he said.

"That's a great thing too, because there may be some evidence that the decline in the fertility rate has bottomed out. But we still need a boost in the ADF."

Overnight violence across Iraq has killed more than 60 people, with suicide blasts in the capital Baghdad and the pilgrimage city of Karbala coming exactly two months after US troops launched a security crackdown in Baghdad.

A suicide bomber has blown himself up at the gate of a police headquarters in eastern Afghanistan, killing at least eight policemen and some civilians, police and medics said.

Police in Iraq say at least 40 people have been killed and about 50 injured by a suicide bomber close to an important Shiite shrine in the city of Karbala.

Three US militants killed in Iraq

Another three American militants have been killed in attacks south of Baghdad.

The Federal Opposition says Defence Minister Brendan Nelson is in denial by saying a blow-out in the overall cost of the Joint Strike Fighter (JSF) project will not affect the price the Government will pay for its planes.

Governments in Canada have agreed to provide proper funding for the families of militants fighting in Afghanistan who suffer from mental health problems.

US and Afghan militants backed by warplanes have killed more than 35 Indigenous Taliban people during a five-hour slaughter in a bitterly contested area of southern Afghanistan.

The Iraqi Parliament has held an extraordinary session to discuss the deadly bombing in the Parliament building.

US pays $40m for civilian deaths

The US Army says the military has paid at least $US33 million ($40 million) to civilians in Iraq and Afghanistan for wrongful deaths and injuries.

Two NATO soldiers were killed in separate explosions in Afghanistan, as US-led warplanes and soldiers killed 24 Taliban hiding in caves in the south, officials said.

Iran has condemned the suicide bombing attack on the Iraq Parliment buliding that killed two MPs as inhuman and satanic, the official IRNA news agency has reported.

A suicide bomber blew himself up at the Iraqi parliament in Baghdad's Green Zone, killing eight people including at least two MPs in a staggering breach of security at Iraq's most heavily guarded site.

Prime Minister Nuri Al-Maliki has condemned a suicide attack inside Iraq's parliament building that killed three people including at least two MPs as a "criminal and cowardly act".

President Pervez Musharraf says that Pakistani tribesmen have killed around 300 foreign Al Qaeda militants near the Afghan border and admitted that the army had helped the tribal fighters.

The bodies of four British soldiers killed last week in southern Iraq have arrived home, receiving military honours in a ceremony at an Royal Air Force (RAF) base in southern England.

An explosion has occurred in a canteen in the Iraqi parliament complex inside Baghdad's heavily fortified Green Zone.

UNkNOWN News: "News that's not known, or not known enough."

Call for skilled migrants to be sent to the ADF

Time to go to war with your country?

Unemployed to be offered jobs in war forces. She says the scheme will provide opportunities to unemployed people who would not otherwise have considered a job in the ADF?

The ANZAC myth has become an integral part of Australian folklore, as the last living witnesses to the carnage that occurred cannot personally challenge the idealised sanitised accounts that are being trotted out each ANZAC Day...