The struggle in Beit Ummar escalates

On Saturday, a group of Israeli anarchists, uk activists and internationals tore down two sections of an Israeli settler fence blocking access to Palestinian farmland. Involved in the action was a group of UK Action Medics. 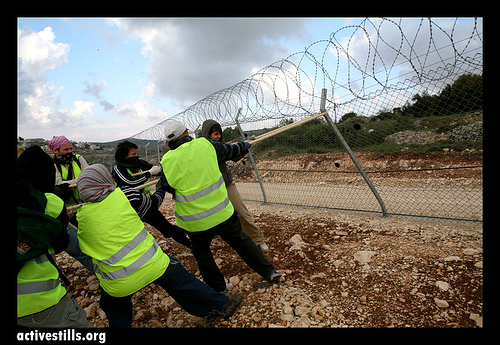 The fence that circles the settlement was built about 200 meters from the already existing fence of the settlement, also on the village's lands.

The wider trajectory of the newer parameter fence leaves a large area of agricultural land, owned by farmers from the village, practically inside the settlement and out of reach for the villagers. When villagers do try and access their lands, they risk assault by settlers or the army.

Villagers had already taken the matter to court, which ordered a gate to be opened daily, to allow regular passage. But like in any other place in Palestine, decisions of the Israeli court are not even worth the paper they are written on, and farmers do not have real access to their lands. In reality, for farmers to be able to work one day on their lands, they must waste two weeks on bureaucracy. Even after all the papers are set, the whims and moods of the individual soldier at the gate or the settlers from Karmei Tzur determine the faith of the day's work.

A group of about 40 villagers and activists from various places gathered in the village Saturday to say – no more, this fence must be taken off!

After a short walk from the village, the larger group split into smaller ones, and started attacking the fence in a few spots, using bolt cutters and sledgehammers.

About seven minutes of quick and efficient work were enough to destroy some 20 meters of the fence. At that point, a security guard came running down from the settlement towards one of the groups, loading and pointing his rifle towards them, and threatening to shoot them.

A second group faced a similar situation as an army jeep stopped next to them, the soldiers in it threatened the activists, while in the background settlers were calling on them to shoot the group. The activists decided that enough damage was done, and that it was a good time to retreat.

The two groups headed back to the village, where they decided to remove another fence, next to the highway, that prevents farmers from working their lands.

The activists managed to cut about ten meters of that fence before being spotted by an army patrol, but managed to return to the village before any confrontation developed.

Read more about the street medics in Palestine:
smontour.livejournal.com

Watch a video of the action:

Respect for the Israeli Anarchists Against the Wall ...

Your struggle is an inspiration everywhere .. keep it up!