Major publisher Reed Elsevier is given a rough ride both inside and outside its AGM in London today for its sideline in organising international arms fairs. 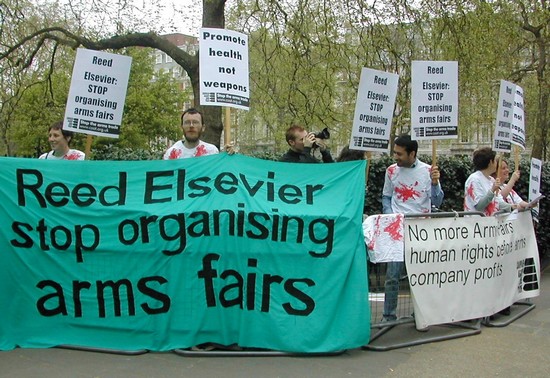 Reed Elsevier's board today struggled to defend their reputation at an AGM dominated by criticism of their role in the arms trade. Reed is best known as an academic and medical publisher but most questions concentrated on their subsidiary business running arms fairs. Meanwhile academics, medics and students joined Campaign Against Arms Trade (CAAT) in a peaceful protest outside the building.

Amongst the critics of Reed's arms fairs were Richard Smith, former editor of the British Medical Journal and Jenny Jones, secretary of healthcare students' group Medsin. They both spoke of the contrast between publishing healthcare resources and promoting the tools of war. Other shareholders referred to the sale of cluster bombs and recent divestment by major investors.

"Reed Elsevier's reputation has today fallen even further. Reed's own shareholders and customers are insisting that their arms fairs must end. But Reed's bosses can still save their company's reputation: they can announce that they will stop their arms fairs."

1. Campaign Against Arms Trade (CAAT) works for the reduction and ultimate abolition of the international arms trade.

2. Today's AGM took place at the Millenium Hotel in Grosvenor Square, London. The demonstration, which was entirely peaceful and lawful, was organised by CAAT with the support of healthcare students' group Medsin.

3. Reed Elsevier runs arms fairs through its subsidiary company Reed Exhibitions. These include Defence Services and Equipment International (DSEi) which will next take place from 11th-14th September 2007 in London.

4. The Joseph Rowntree Charitable Trust sold all its shares in Reed Elsevier, worth nearly £2,000,000, on 12th February 2007 after three years of critical engagement with the company on its role in the arms trade. On 2nd March, 138 academics published an open letter calling for Reed to end its arms fairs. On 23rd March, the same call was made by the Royal College of Physicians and the editorial board of The Lancet (which is published by Reed Elsevier).

5. CAAT spokespeople are available for interview on this subject.

6. More photographs of today's demonstration are available on request.