The Vanunu Freedom Ride (VFR), cycling from Faslane to London, visited Nottingham on April 16 to raise awareness of the plight of Israeli dissdent Mordechai Vanunu. 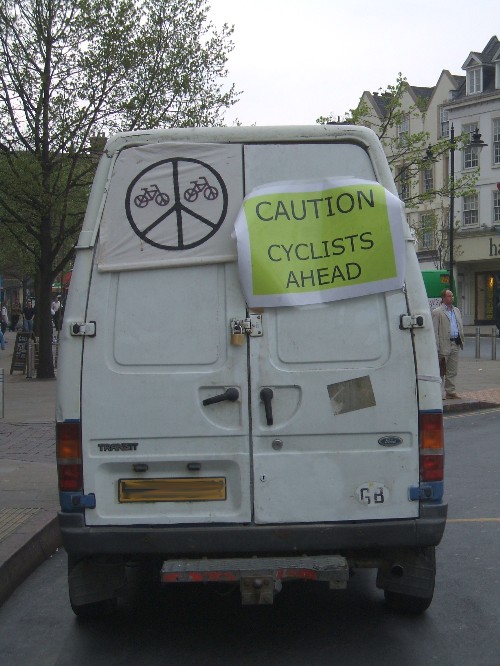 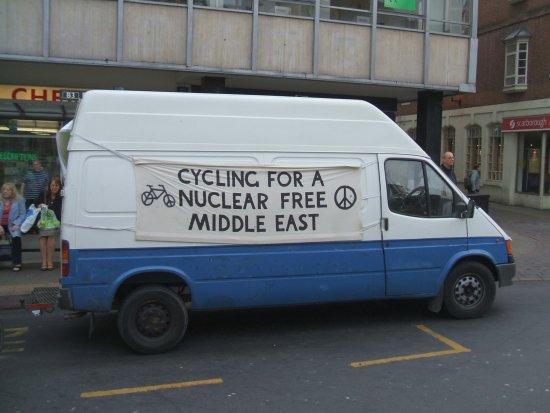 On April 21 2007, Mordechai Vanunu will will have been held captive by Israel for 21 years. His "crime" was confirming to the world that Israel had a nuclear weapons programme, for which he served 18 years in prison. Ostensibly released in 2004, he remains subject to various restrictions on his movement and a prohibition on contacting foreigners.

In protests at Vanunu's treatment the participants in the VFR are cycling from Britain's own nuclear base at Faslane, near Glasgow to London. The event will culminate with the submission of a petition to Downing Street and a rally outside the Israeli Embassy.

Along the way they are visiting various towns to spread the message. On April 16 they travelled from Sheffield to Nottingham (via Crowford). Initially they made their way to the university where they were met by local cyclists including the infamous four-seated bike of Critical Mass-fame and a soundsystem.

At this point your intrepid reporter, who doesn't have a bicycle, was proffered a spare bike and found himself riding into town with the rest of the group. This is the main reason there aren't many photos accompanying this report, so if you've got any please add them below.

The ride made its way out of the South Entrance onto University Boulevard, up Abbey Street and over Abbey Bridge onto Castle Boulevard, up Maid Marian Way and then right down Beastmarket Hill into Slab Square, where further supporters were waiting.

There were brief speeches from two of the riders and a representative from Unison. While this was the end of the ride (at least for me), festivities continued later the evening with a social-cum-film night at the Sumac Centre. Food was served and the documentary, "Israel's Secret Weapon," about Vanunu was shown, followed by a Q&A session.