David Venegas Reyes, member of APPO, adherent of La Otra, and member of VOCAL was detained last friday in Oaxaca. David was beaten and tortured following his detention, police authorities have charged of drug dealing after placing in his bag 22 grams of cocaine and heroin. 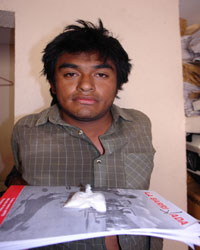 
David Venegas was tortured, beaten and detained on Friday 13th of April and presented 8 hours later to the Anti Narco police (UMAN Unidad Mixta de Atencion al Narcomenudeo), where the day after he had to give a 5 hour long declaration. There he could have been granted freedom given the lack of proof in the accusations, however the Ministerio Publico Federal decided not to grant him freedom on bail.

In the morning of April 14th he was transferred to the central Penitentiary of Ixcotel. When entering jail another arrest warrant was ready for him, “proceeding 157/2006 for damages to the Court of Justice of Oaxaca on the 25th November 2006” (Newpaper “el Excelsior” 11th March 06).

State and federal authorities charge him of crimes against health (drug selling), sedition, burning of buildings and disobedience. The reality is that David was detained while he was walking along the street with two other people. Without presenting any arrest warrant Ministerial Police started beating him and took him away. When he was presented in front of the public ministry and the media he was shown with drugs that were put in his bag at the moment of his arrest. According to David, they tried putting a large quantity of something he did not get the chance to see, but he supposes it was drugs. However when the policemen saw that the packet they were trying to put into his bag did not fit, they put another smaller bag with white powder, apparently cocaine and heroin.

When they took pictures of him to be presented to the media as a drug dealer, David opposed resistance and was beaten badly. He refused to hold in his hands two magazines “La Barrikada” on which they deposited the bag with the white powder, supposedly cocaine or heroine. David does not know where these facts took place.

At the moment of his declaration in UMAN , David was presented with other smaller bags of white powder with which they took pictures of him. See

Resides all the irregularities, he is still detained. Today a number of mobilizations are starting in protest against is unfair detention. On the 15th April a demonstration got to the doors of the penitentiary where David is detained demanding his freedom. Jail authorities offered him privileges as a Political Prisoner, but David did not accept them, since the only thing he wants is his freedom.

This doubtful trial which the government of the state of Oaxaca has undertaken against the compañero David Venegas Reyes is nothing else but an attempt to defame his political work, and intimidate people who with great dignity are involved in the Oaxacan social movement.