BAE Systems have admitted paying a private investigation agency to gather information on activists and groups including Campaign Against Arms Trade (CAAT). BAE paid £2,500 per month to LigneDeux Associates, whose agent Paul Mercer passed information about CAAT to BAE's Director of Security, Mike McGinty. BAE insist that they expected Paul Mercer to operate within the law, but he has now admitted providing them with a legally privileged document internal to CAAT. This document concerned the impending judicial review of the Serious Fraud Office decision to end an inquiry into BAE's arms deals with Saudi Arabia.

BAE's deal with LigneDeux came to light after legal action by CAAT resulted in an affidavit from Mike McGinty. Paul Mercer has stated that McGinty tipped him off about the contents of the affidavit on the day that it was sent to CAAT. Following the tip-off, he closed down the e-mail address that he had used for passing information to BAE. However, Paul Mercer insists that he was sent the document anonymously, receiving it in on CD-ROM in the post less than 24 hours after it was written. CAAT has now referred this matter to the police.

"Just as it seemed that BAE's reputation could sink no lower, they have admitted paying an agent to investigate peaceful campaigners. CAAT is an open and nonviolent organisation with thousands of supporters from all walks of life. BAE's underhand methods further call into question the intimate relationship between BAE and the Government."

1. Campaign Against Arms Trade (CAAT) works for the reduction and ultimate abolition of the international arms trade.

2. A more detailed media briefing on the above story and its background is available on request.

3. CAAT spokespeople are available for interview on this issue.

Spy is a pal of Tory MP

Anyone got a photograph of Mr Mercer ?

"A man spying on peace campaigners for the arms firm BAE was last night revealed to be closely linked to the Conservative party. Paul Mercer, a friend of shadow defence minister Julian Lewis, was exposed through court action by the Campaign Against the Arms Trade (CAAT). He was revealed to have been paid £2,500 a month by the giant arms company's security department for his work against CAAT. He claims he was being paid to simply monitor the group and its activities. BAE is facing a wide range of bribery allegations...

Mr Lewis, Conservative MP for New Forest East, denied last night having any knowledge of Mr Mercer's work for BAE. He said: "I worked closely with Paul in the 1980s. He became a Conservative councillor and he did a lot of good work exposing the far left." Asked if he had been in touch with Mr Mercer during his recent undercover BAE work, Mr Lewis said: "I am in social contact with him. I regard him as a friend."

Mr Mercer claimed in court statements that he was unaware of where a CD containing CAAT's confidential material had come from. He said it was left for him in a plain envelope. The litigation revealed that Mr Mercer, who had a history of infiltrating peace groups such as CND, had disguised his dealings with BAE from his home in Loughborough.

The court proceedings detailed how BAE's undercover methods work against those they regard as a threat to their arms business. Mr McGinty, and a colleague, Martin Carroll, ran the operation via another company, Global Open Ltd, which contacted Mr Mercer, who called himself LigneDeux Associates. This is the second time BAE, which refused to comment, has been linked to undercover operations against their critics: a security consultant called Evelyn Le Chene recruited agents to infiltrate CAAT."

not his first time

Paul Mercer has a long history of 'infiltrating' groups and dishing the dirt to the powers that be, or selling the info. He published Directory of British Political Organisations by Paul Mercer (1994), which had personal info/contact details on people and groups involved in Earth First! and other related eco-direct action stuff of the early 90s. He's done the same with the Close Campsfield campaign, and I'm sure many others. 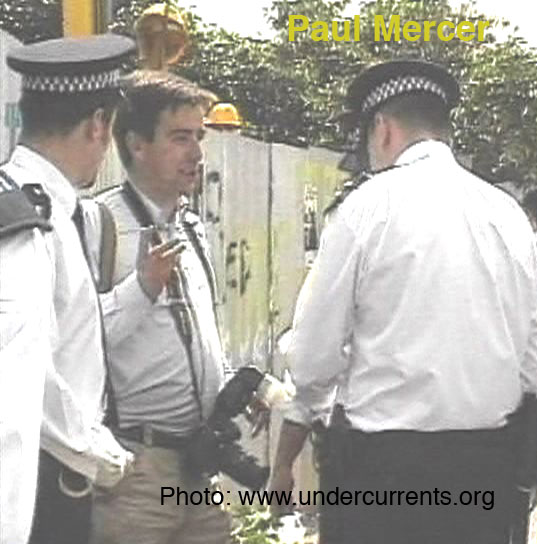 We went through our undercurrents archive and found a video image of Paul Mercer circa 1995.

He is only one of many...but if I ever see him I will give him a big hug around his neck, and I will love him and I will cherish the memory of that moment.