So reads the splurge on the Mark Thomas website ( 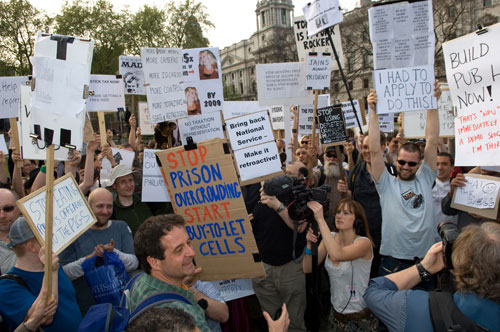 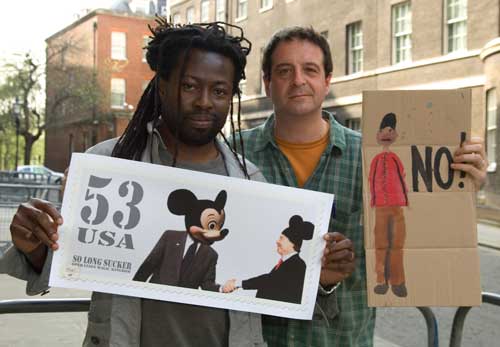 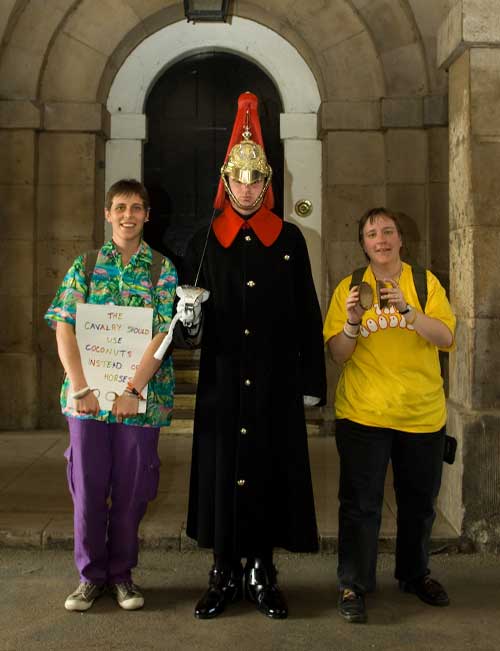 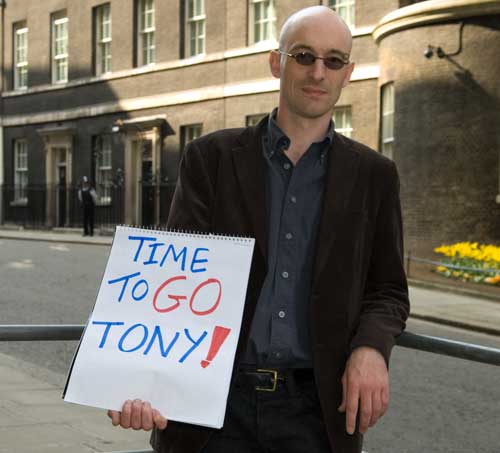 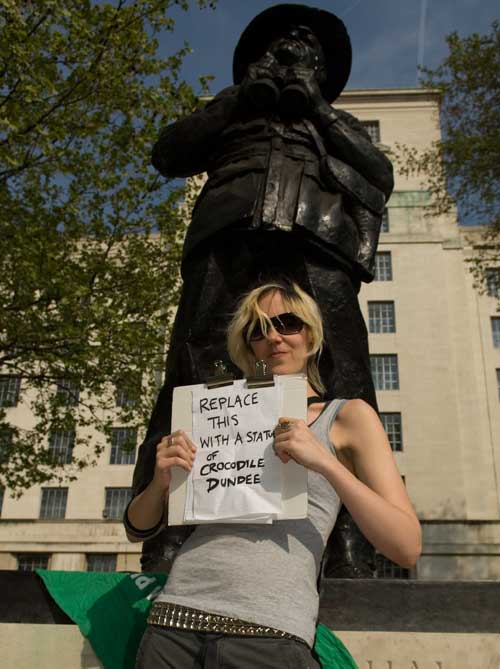 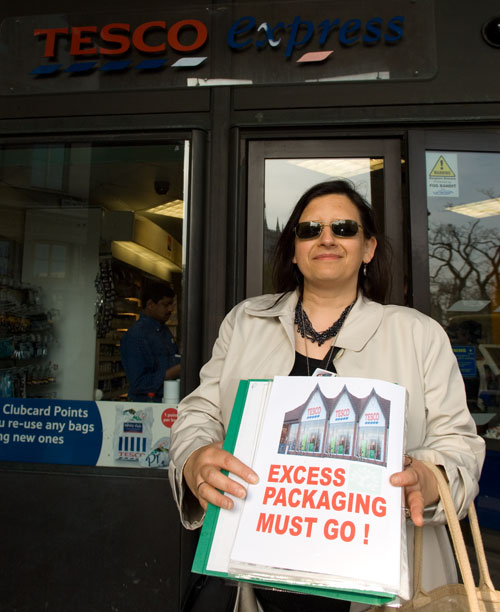 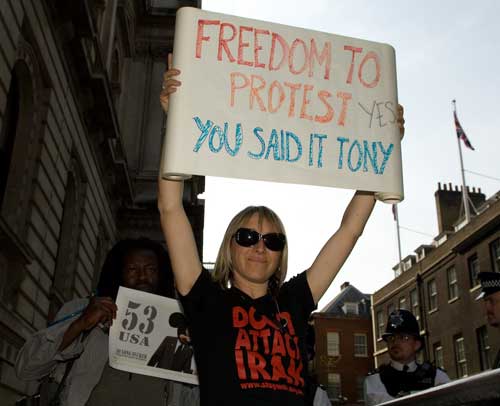 Well it was a bit of fun all round with participants arriving from all over the country, converging on Parliament Square for a 10.30 start and a 5.20 finale. Their protests were diverse, ranging from less packaging in Tesco's to abolishing the monarchy to equal rights for Welsh dragons.

But the real purpose was to highlight the absurdity of an act that only allows state sanctioned protest. Every one protesting today was legal because 2294 individual applications had been processed by the police. To protest without this permission would incur criminal prosecution leading to a penalty - if you were "the organiser" - of up to 51 weeks in jail.

Activists have protested against the act since August 2005 and there have been many arrests and serious and violent police harassment of several targeted individuals. A timeline is published and regularly updated at

http://www.indymedia.org.uk/en/actions/2006/socpa/ and it makes for shocking reading.

http://www.indymedia.org.uk/en/2006/07/345314.html) but really caught the public's imagination with a BBC radio broadcast earlier this month. As one participant - a first time protester - put it, "it really shows the power of the personality". There's no doubt that actions such as this are bringing the putting this repressive act into a public spotlight.

The danger, conversely is that it can be seen as just a bit of fun. Today might well be hijacked and produced as evidence by Blair's goons that protest is alive and well, and that ordinary decent people are welcome to visit the seat of government and say just about anything they want.

Extremists and terrorists, they'll claim, are the only ones with any reason to fear the law.

Indeed, on 7 April 2002 Blair made a speech to the George Bush Presidential Library.

"When I pass protestors every day at Downing Street, and believe me, you name it, they protest against it, I may not like what they call me, but I thank God they can.That's called freedom."

Remember those words as you check out "extremists" Steve Jago and Barbara Tucker.

And in this video:

http://www.indymedia.org.uk/media/2006/07//344853.mp4 both Barbara and Steve stand outside Downing Street, only to be violently arrested and carted away in front of horrified tourists.

This is the everyday reality of SOCPA. These aren't terrorists, these aren't extremists, they're just ordinary people protesting against things the state won't permit.

Believe me, that's not what you call freedom. 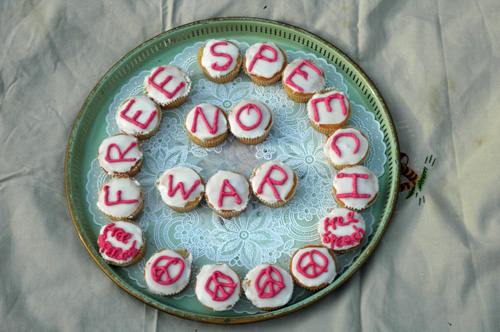 i spoke to one of the participants and they told me about the notification they'd received for their 20 applications for demonstrations in 20 locations on 20 different issues. it was just one letter. it referred to "various demonstrations".

so, it seems the police are once again showing their true political colours.

they get round the socpa law by sending out a single letter to cover twenty demos when it's mark thomas's bit of fun, but the real peace protestors continue to be hounded through court on technicalities.

cf barbara tucker, who notified police of her single ongoing demonstration more than a year ago. while the police accepted a notification from someone else last year iced on a large cake (as per the law "in writing"), they believe that barbara's notification, by email, doesn't comply with the law. and though they accept twenty different notifications for demos on different subjects in twenty locations, and treat it as one, they claim barbara's single issue demo in the socpa zone "at any time until this government goes" is not a proper notification and so they can't authorise it.

well, i don't think they can have it both ways, and indeed it seems they might not, too. their socpa prosecutions of barbara roll on and on and have never yet been tested in court. instead they've tried to imprison her for all sorts of other offences - so far with spectacular lack of success, and they've even tried to section her under the mental health act on two occasions (again unsuccessfully, mainly owing to the fact that despite their continual harassment and intimidation of her she remains astonishingly sane).

eventually, the courts will show barbara right, and socpa will be defeated, but in the meantime, these fun games just show up the police partisanship more and more clearly. 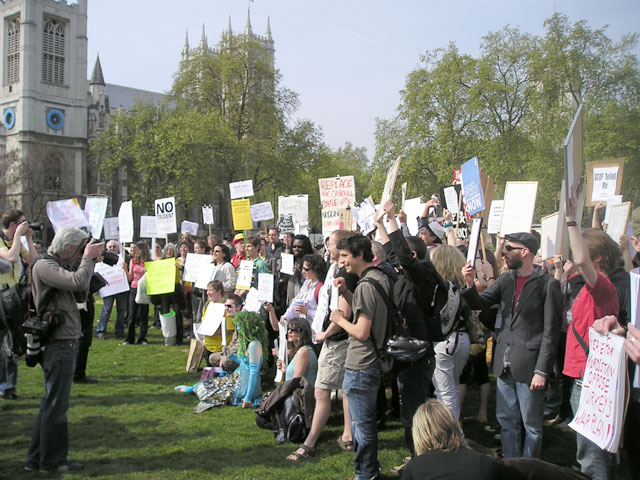 Low police presence at start, in front of the tourists, but I heard they were hassling individual protesters after they had left the square.

There were hardly any police around. The only ones I encountered were at Downing Street and New Scotland Yard. And they have never been so friendly and welcoming to protestors!!!! Actually there was one misery who told me off for walking on the road near the Cenotaph but he obviously hadn't been ordered to join in the 'fun' and not cause us trouble like the rest had apparently been told.

No hassle by police

We had no hassle by the Police on the way round - they all seemed to think it was a bit of fun. We took to stopping them and INSISTING they check our authorisations.