The intrepid Vanunu Freedom Riders complete the last leg of their gruelling 600-mile bicycle journey from Faslane in Scotland to Downing Street and the Israeli Embassy in London.

It's all about justice for Mordechai Vanunu, on the 21st anniversary of his incarceration by the Israeli government for blowing the whistle on the country's secret nuclear weapons, and to demand a Middle East and Planet free of nuclear weapons and the threat of their deployment.

After receiving a warm welcome at Hackney Town Hall, then completing their civic duties at 10 Downing Street and the Israeli Embassy (or as near as the police would let them go), the freedom riders retired to Kensington and Chelsea Town Hall for refreshments and entertainment from 'socialist conjuror / comic / ventriloquist' Ian Saville

*and don't forget to check out the ride blog!* (link at bottom of homepage) 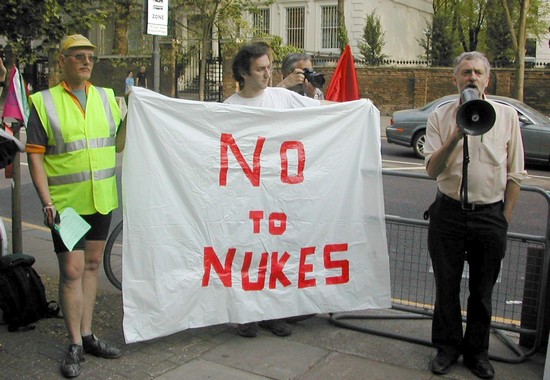 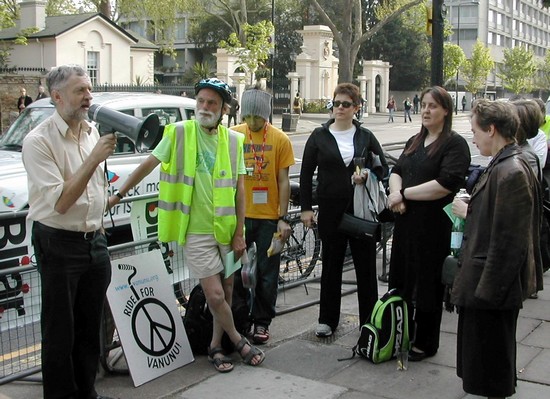 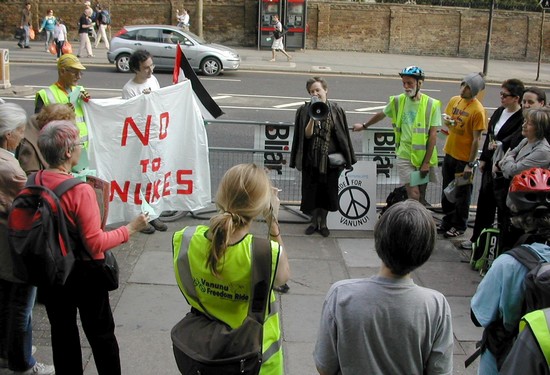 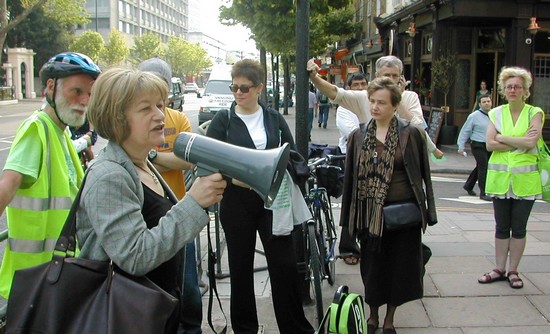 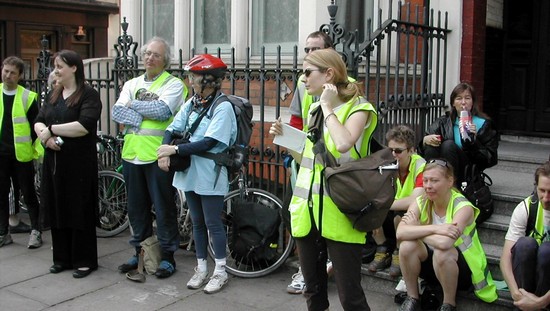 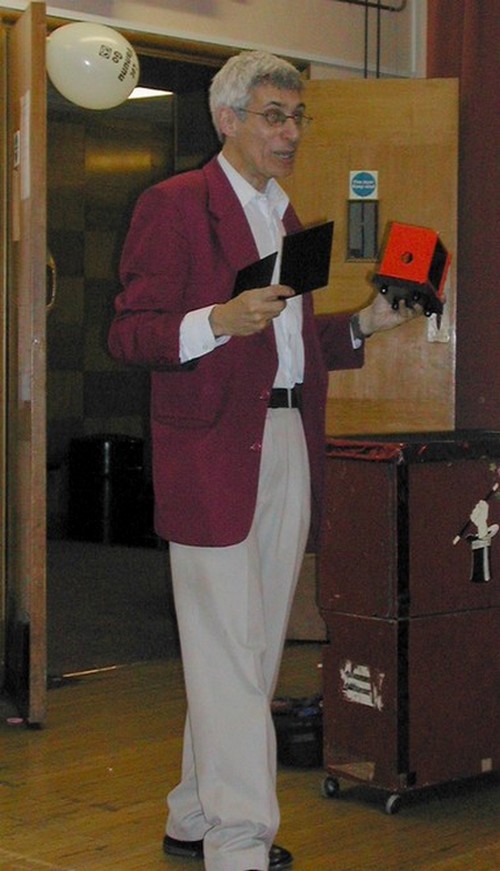 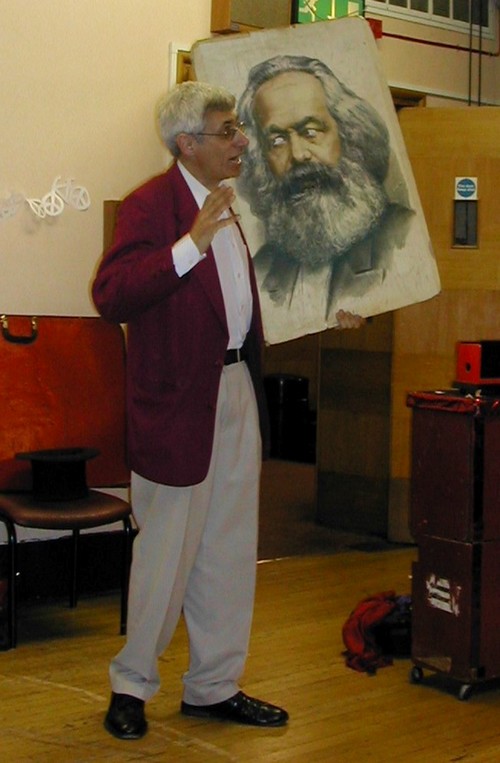 Ian and Karl do their double act!

Pics from rally (near) Israeli Embassy in Kensington, and reception at Kensington and Chelsea Town Hall.

Reports from the journey

The Ongoing Trials of Mordechai Vanunu


On April 30, 2007 Mordechai Vanunu will learn if he will return to jail for speaking to foreign media in 2004.

On Friday the 13th of April, 2007, Vanunu was informed that the Israeli government has continued his house arrest in Jerusalem and has renewed all the restrictions against him, for the fourth time and into the third year of his captivity in east Jerusalem.

Although 'freed' from 18 years in jail on April 21, 2004 for telling the world Israel had gone nuclear, Vanunu has been forbidden to leave Israel, forbidden to speak to media and to foreigners under the draconian restrictions of the Emergency Defense Regulations which were implemented first by Britain against Palestinians and Jews after World War II.


After WWII, a leading Jewish attorney, Yaccov Shapiro, who became Israel's Minister of Justice described the EDR as "unparalleled in any civilized country: there were no such laws in Nazi Germany." [Ateek, Justice and only Justice, pg. 35]

On January 25, 2006, Vanunu's freedom of speech trial began which brought charges against him for giving interviews to foreign journalists twenty one times, conducting chat room conversations with other foreigners, and attempting to travel to Bethlehem on Christmas Eve, 2004.


Vanunu, a Moroccan secular Jew atheist existentialist, was baptized a Christian in 1986, just a few weeks before being kidnapped, clubbed, drugged, bound and thrown onto an Israeli cargo ship leaving Rome for home by the Mossad. After a closed door trial and 18 years in jail, most all of it in solitary confinement, Vanunu has lived in east Jerusalem, forbidden to leave Israel, forbidden to speak to foreigners, forbidden to approach any embassy, he has no passport and he is required to report to the police if he wishes to sleep in another home.

The Universal Declaration of Human Rights, adopted by the UN in 1948 was ratified by Israel and was contingent upon their statehood.

Article 13-2 affirms: "Everyone has the right to leave any country, including his own."

The Israeli government refuses to allow Vanunu to leave claiming he still has a secret he has yet to tell about the underground WMD program in the Negev. Vanunu has not set foot into the Dimona for 21 years and International Atomic Energy Agency (IAEA) Inspectors never have.

In March 2006, Vanunu informed this foreignor and reporter, "The Dimona is 46 years old; reactors last 25 to 30 years. The Dimona has never been inspected and Israel has never signed the Nuclear Proliferation Treaty but all the Arab states have...when I worked there they only produced when the air was blowing towards Jordan ten miles away. No one knows what is happening now."

On March 29, 2007, The Jerusalem Post quoted Yonatan Leibowitz, Greenpeace Mediterranean Communications Director, "Despite Israel's policy of nuclear ambiguity, international reports maintain that this country contains nuclear facilities. Israelis have the right to know where these facilities are and the right to understand the serious risks to health and the environment posed by these installations. Ambiguous policies about the possible existence of a nuclear program in Israel only serve to destabilize the region."

Article 18 of the Universal Declaration of Human Rights, which Israel agreed to uphold states: "Everyone has the right to freedom of thought, conscience, and religion: this right includes freedom to change his religion."

During this foreignor and reporter's June 2005 interview with Vanunu he emphasized, "When I decided to expose Israel's nuclear weapons I acted out of conscience and to warn the world to prevent a nuclear holocaust...I am also regarded as a traitor because I was baptized a Christian.

"My Christian conversion was also considered as treason and led to me receiving more time in jail than any murderer has ever served. The Israelis have this very beautiful article about freedom and liberty but they want to destroy anyone who criticizes them for revealing the truth to the world. The world must look and see what kind of democracy Israel is when one speaks out the truth."

In 2004, Vanunu stated, "...from the beginning they put me in total isolation for seven weeks after my kidnapping they even didn't admit I am in an Israeli prison...they put me in total isolation. The first two years, they keep me in a small room, filled with light 24 hours and camera inside. I couldn't sleep for two years; they tried to break my nerves. I demanded to meet a priest. They give me a priest, but without able to speak to him or him speak to me, only through notes. A ShinBet man sitting near the priest, reading the notes. I'm sending him notes, they're reading them. We couldn't meet as a human being. Eleven and a half years I was in total isolation alone in a cell."


"Israel is the only State that approved torture of detainees...there are dictators who use torture, but Israel is the only State that supported torture until 1999. That is when International, Israeli and Palestinian pressure groups forced the issue and Barack was confronted about it when he visited the United States...The methods and photos from Abu Grahib and Guantanamo were no shock to any Palestinian who had been in prison between 1967 and the '80's. All the methods used in Abu Grahib were normal procedures against Palestinians. In 1999 Internationals, Palestinians and Israelis for human rights threatened a boycott against Israel and that is what forced the Supreme Court to address the torture issue. They did not ban torture and the General Prosecutor can choose not to prosecute those who still use it." [Ala Jaradat, Director of ADAMEER [Arabic for Conscience] to this reporter, January 5, 2006, in Ramallah ]

Article 9 of The Universal Declaration of Human Rights commands that, "No one shall be subjected to arbitrary arrest, detention or exile."

On Christmas Eve 2004, Vanunu was arrested while in a taxi attempting to travel the few miles from Jerusalem to Bethlehem to attend mass at the Church of The Nativity. Instead of going to church, he was hauled into jail and charged with; "attempting to leave the country."


Article 19 of The Universal Declaration of Human Rights acknowledges,
"Everyone has the right to freedom of opinion and expression; this right includes freedom to hold opinions without interference and to seek, receive and impart information and ideas through any media and regardless of frontiers."

On February 22, 2006 in a Jerusalem court it was revealed that Israel had led Microsoft to hand over all the details of Vanunu's Hotmail account by alluding Vanunu was being investigated for espionage and before a court order had been obtained.

Vanunu wrote: "Microsoft obeyed the orders and gave them all the details...three months before I was arrested and my computers were confiscated...it is strange to ask Microsoft to give this information before obtaining the court order to listen to my private conversations. It means they wanted to go through my emails in secret, or maybe, with the help of the secret services, the Shaback, Mossad."

Attorney Michael Sfard repeatedly requested Police Representative Mr. Peterburg, to specifically state what type of espionage activity Vanunu was accused of. According to Vanunu, "The policeman did not have any answers and said that he brought all the evidence to the court. When Sfard asked him again about any material related to the 'espionage' charge, Peterburg had no answers.

"Sfard proved that the police had misled the judges who gave the orders to arrest me: to search my room, to go through my email, to confiscate my computers and that they misled Microsoft to believe they are helping in a case of espionage. The State came to the court with two special secret Government orders; Hisaion [documents or information that are deemed confidential by the government and kept from the court, the defendant, and lawyers.] This allows the prosecution to keep documents related to my court hearing secret. One was from the Minister for Interior Security and one from the Minister of Defense."

Vanunu's secretly taped police interrogations, his 2004 Christmas Eve arrest for "attempting to leave the country" while traveling the four miles from Jerusalem to Bethlehem, the confiscation of his private property by thirty IDF that stormed into his room at St. George's Cathedral, according to Vanunu, have all "been done...under the false and misleading statements to the courts of 'suspicion of espionage', and yet they are not charging me with spy crimes... and the fact is that I have not committed any crimes."

On April 30, 2007, the verdict in Vanunu's freedom of speech case will be rendered. Although the case is being tried in the lowest tier in the Israeli court system and the maximum sentence that could be imposed if he is found guilty is six months, Vanunu's Attorney, Avigdor Feldman has said that this historic case is one of the most significant he has ever defended "because it involves important issues about the Israeli government producing weapons of mass destruction and Vanunu's right to let the people know about that."

What this American reporter finds most significant, is that Israel is a nuclear power that America supports politically and economically and the Fourth Estate in the USA ignores a trial in Jerusalem over the inalienable right to free speech and thought.