The decision to allow Posada Carriles to go free in Miami is the clearest demonstration of the double moral standards of the American government... 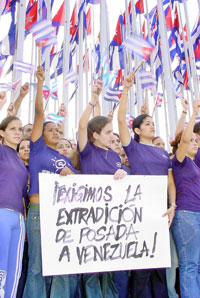 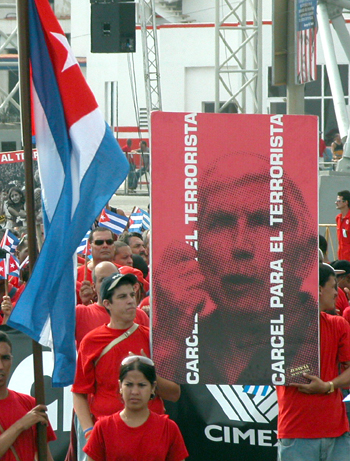 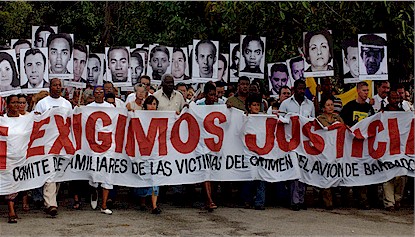 Declaration by the Committee of Relatives of the Victims of the Cubana Airliner Sabotage in Barbados.

At a time when we share the profound pain of relatives and the American people, because of the massacre of young students at Virginia Tech, we are faced with the horrendous and outrageous decision of the United States government to release on bail the notorious international assassin and terrorist Luis Posada Carriles.
We are filled with indignation that this assassin, protected by the American authorities, is able to return safe and sound to Miami, the lair of terrorists who for more than 40 years have committed numerous crimes against our people.
Once again, the senselessness and impunity overtakes reason, truth and justice.
The news communicated yesterday by the world press has plunged us again into mourning and it reminds us of those terrible bitter moments we lived through in October 1976, while we were children we suddenly lost relatives as the result of the abominable crime committed by Posada and Bosch against innocent civilians when they exploded a bomb on board the Cubana airliner in mid-flight off the coast of Barbados.
Today we would like to alert the world to the danger posed by the liberation of the worst assassin in the western hemisphere.
This repugnant henchman was recruited and trained by the CIA to carry out horrible terrorist acts against Cuba, together with the other terrorist Orlando Bosch who is freely strolling through the Miami streets, protected by the amnesty granted him by Bush Sr. when he was president of the United States.
Luis Posada Carriles participated in the Bay of Pigs Invasion, in Operation Condor and was the organizer and intellectual author of the sabotage and explosion on board of the Cuban Airlines plane in mid flight, taking the toll of 73 lives on October 6, 1976. Assisted by the CIA, he escaped from a Venezuelan prison in 1985, and immediately got involved in the dirty war against Nicaragua.
A well-known drug dealer, he was responsible for sending drugs to the United States. He gave invaluable service to the Cuban-American Foundation with a series of terrorist acts committed against tourist facilities in Havana during the 90’s. He was actively involved in plans to assassinate our Commander in Chief.
The decision to allow Posada Carriles to go free in Miami is the clearest demonstration of the double moral standards of the American government: they free a terrorist while they keep five anti-terrorist heros cruelly and unjustly incarcerated.
We, the relatives of the victims of terrorism are totally astounded by so much cynicism. The government of the United States has mocked our agreements and treaties that oblige them to judge Posada Carriles as a terrorist. On May 11, Posada appeared in court accused only of lying; what infamy, what mockery of international public opinion, of the American people and of the relatives of the victims of the crimes committed by this assassin who ought to be immediately sent back to prison, that is our demand.
We can never forget his defiant words, saying that he regretted nothing and that if he were to be born again he would do exactly the same. When he was interviewed about the bomb that he ordered to be blown up in the Copacabana Hotel, which ended the life of Fabio Di Celmo, he spoke with complete disdain for life: the young Italian “was in the wrong place at the wrong time”.
Those words uttered by this infamous assassin were inconceivably repeated by President Bush, when he referred to the young students massacred at Virginia Tech as having been in the wrong place at the wrong time.
This vigil which we begin today is to alert the world about the responsibility of the Bush administration in the liberation and harbouring of the terrorist Posada Carriles, to demand that the assassin be returned to prison, that he be judged for what he is: a notorious terrorist or that he be extradited to Venezuela; there is no other alternative, the people are anxious that justice be done.
At this moment of indignation we remember the poem “I Ask for Punishment” by the unforgettable poet Pablo Neruda.

FOR THOSE WHO SPILLED BLOOD IN OUR COUNTRY, I ASK FOR PUNISHMENT

FOR THE EXECUTIONER WHO SENT US MURDER, I ASK FOR PUNISHMENT

FOR THOSE WHO PROSPERED FROM OUR SLAUGHTER, I ASK FOR PUNISHMENT

FOR HE WHO GAVE THE ORDER THAT CAUSED OUR AGONY, I ASK FOR PUNISHMENT

FOR THOSE THAT DEFENDED THIS CRIME, I ASK FOR PUNISHMENT.

COMMITTEE OF THE RELATIVES OF THE VICTIMS OF THE CUBANA AIRLINER SABOTAGE IN BARBADOS.

STATEMENT BY THE REVOLUTIONARY GOVERNMENT OF CUBA


Cuba condemns the shameless decision to release terrorist Luis Posada Carriles and singles out the US Government as the only one responsible for this ruthless and infamous act seeking to buy the silence of the terrorist on his crimes at the service of the CIA, particularly when Bush Sr. was its Director-General.

With this decision, the US Government has ignored the clamor that has arisen all around the world, even within the United States, against the impunity and the political manipulation entailed by this action.

This decision is an outrage to the Cuban people and to the nations that lost 73 of its sons and daughters in the heinous 1976 attack that blew up a civilian Cubana de Aviación aircraft off the coast of Barbados.

This decision is an outrage to the people of the United States and an emphatic denial to the alleged “war on terror” declared by the Government of President George W. Bush.

The Government of the United States would have also been able to enforce those regulations allowing the Immigration and Naturalization Service to retain a non-admissible alien in US territory that is subject to deportation. For that, it would have sufficed if the US authorities had concluded that Posada Carriles is a risk to the community or that releasing him would entail risk of flight.

Why did the Government of the United States allow the terrorist to enter US soil freely despite the warnings expressed by President Fidel Castro?

Why did the US Government protect him during the months that he stayed in its territory illegally?

Why, if it had all the elements to that end, did it restrict itself, last 11 January, to charge him with misdemeanor and other strictly migration-oriented issues and not with what he is really all about: murder?

Why is he released when judge Kathleen Cardone herself, in her ruling of 6 April that ordered the release of the terrorist, recognized that he is accused “…of being involved in or associated with some of the most infamous events of the twentieth century (…) Some of these acts include the Bay of Pigs Invasion, the Iran-Contra scandal, the mid-air explosion of Cubana de Aviación flight 455, the 1997 bombs planted in tourist resorts in Havana and, according to some conspiracy theoreticians, the assassination of President John F. Kennedy”?

Why is the Immigration and Naturalization Service of the Homeland Security Department of the United States not using now the mechanisms that it has available to hold the terrorist in prison, with the unquestionable argument, already used by the US Attorney-General’s Office on a date as recent as 19 March, that if released there is risk of flight?

How come is the most notorious terrorist on this hemisphere now released while five Cuban youths are still ruthlessly imprisoned for the sole crime of fighting terrorism?

For Cuba, there is a clear answer. The terrorist’s release has been concocted by the White House as compensation for Posada Carriles not to reveal what he knows, not to talk about the countless secrets he keeps on his protracted period as an agent of the US special services, when he was involved in Operation Condor, in the dirty war against Cuba, against Nicaragua and against other peoples of the world.

Full responsibility for the release of the terrorist and for the consequences stemming from it would be directly attributed to the US Government and, particularly, to the President of that country.

Even now, after his release, the US Government has all the information and the legal mechanisms to apprehend him again. It just takes the political will to wage a serious fight on terror and recall that, according to President Bush, “…if you provide haven for a terrorist, if you support a terrorist, if you feed a terrorist, you will be as guilty as the terrorists.”

LUIS POSADA CARRILES MUST BE TRIED FOR HIS CRIMES

While in the name of the fight against terrorism, hundreds of thousands of people have died in Iraq and Afghanistan, and others - arbitrarily detained - are tortured in Abu Ghraib and Guantanamo, the United States government protects the most notorious terrorist in this hemisphere, attempting to deceive public opinion through interminable pseudolegal manuevers and refusing to try him for his real crimes.

Luis Posada Carriles was accused and brought to trial in Venezuela for the 1976 attack against a commercial aircraft in which 73 persons died. After escaping from Venezuelan prisons in 1982 - leaving his trial unconcluded - he served the CIA as part of what was known as the "Irancontras" operation and also in the implementation of the genocidal Plan Cóndor. In 1997 he prepared a series of terrorist acts against hotels in Havana - in one of which the young Italian tourist, Fabio Di Celmo, lost his life -, and in the year 2000, the projected attempt against President Fidel Castro´s life at the University of Panama.

In March, 2005, Posada Carriles entered the United States illegally. Only after reiterated public denunciations that revealed the presence of this criminal in U.S. terriitory, the goverment of George W. Bush proceeded to detain and charge him for immigration crimes and false witness, without the slightest reference to terrorism.

Through their handling of Posada Carriles, the U.S. authorities, pressured by groups of Cuban extremists in South Florida, have made evident the double morality of their war against terrorism in the name of which they torture, kidnap and bomb. At the same time, as has been denounced by numerous international forums and United Nations´agencies, five Cuban antiterrorist activists remain unjustly imprisoned in the United States, subjected together with their families to cruel and discriminatory treatment.

All honest people of the world who raise their voices against war and terrorism, have before them irrefutable proof of the lack of ethics upon which the current administration in Washington bases its actions. We, the undersigned, demand that the government of the United States, in compliance with international obligations, charge Luis Posada Carriles for all of his crimes or attend the request for his extradition to Venezuela, which until now has received absolutely no response.