This morning the first four arrestees appeared in the Melbourne Children’s Court, part of the continuing politically motivated police and state campaign against protestors following the demonstrations at the G20 in November. A solidarity action was held at 10am outside the courtroom in support of the arrestees. 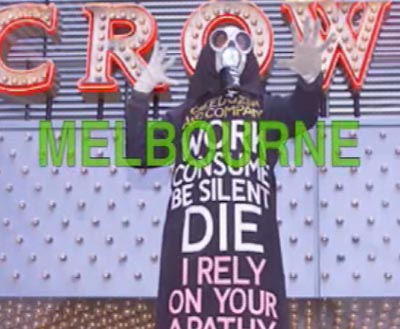 These arrests have taken place as part of a wider campaign of repression against those who took to the streets to directly confront the illegitimate institution that is the G20, whose neo-colonialist policies perpetuate inequality and suffering around the world, and whose member countries engage in war, violence, and internal repression every day.

“Direct action and civil disobedience have long been part of a worldwide campaign against global capitalism and other issues. These tactics have a proud history of success from the suffragettes movement, to the struggle for the 8 hour work day, to the gay rights movement in Tasmania.”

In the past months, vast resources have been dedicated by the government to the police to carry out dawn raids, undertake extensive surveillance, and slap protestors with ludicrous charges and repressive bail conditions.

“This demonstrates the politicized nature of policing in this country,” says Anita Thomasson. “These charges are simply an attempt to allow only a certain form of protest that can be more easily contained and ignored, especially in the lead up to the APEC summit in September, where global leaders including George Bush will meet in Sydney.”

On Saturday the 21st of April, Liz Thompson, speaking at the David Hicks rally in Melbourne, drew links between the ongoing prosecution of G20 arrestees and broader attacks on civil liberties as seen in the case of David Hicks.

“Why is it that the full force of the state, snatch squads, federal police, anti-terror units, have been deployed against the G20 protestors, when Paul Wolfowitz, architect of the Iraq invasion, a man whom almost a million Australians, and millions more around the globe protested against, gets a special invitation?” she asked.

“The criminalisation of solidarity and resistance will not prevent us from taking actions in our own defence – it simply makes the law look more and more like an instrument of the rich and powerful to use against the poor and powerless.”

We are calling for all charges to be dropped.