25 of april, Lisboa, Portugal. 400 people participate in an illegal anti-fascist demo. After the programmed end of it, a different and smaller group of 50 persons, marched towards the fascist partie headquarters, but the riot police stoped them with brutality, and eleven arrests were performed. 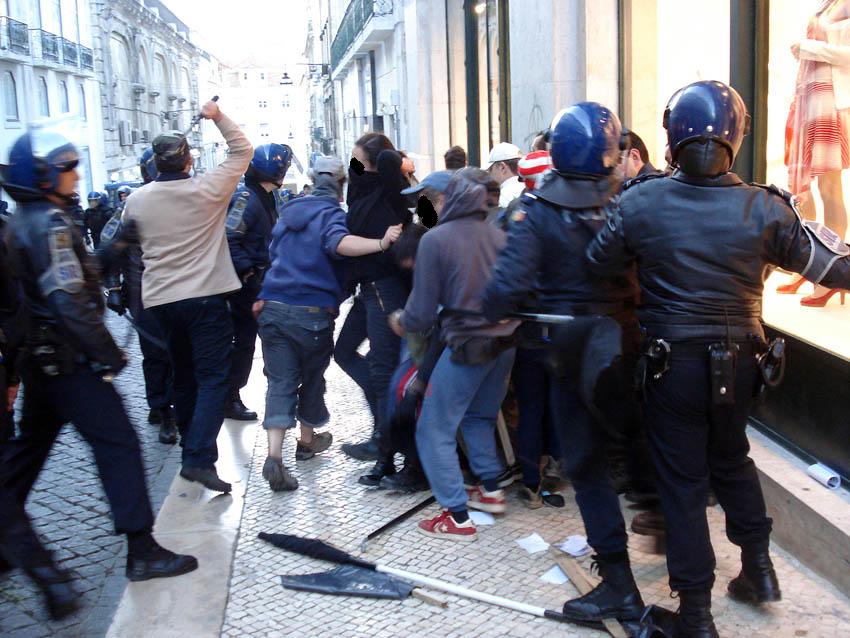 On more recent devellopments, all the arrested mates were released yesterday, 26th of april. They are now being charged with vandalism and disrespect towards authority. Their lawyer has already declared they had no violent intents, and they are now charging the police officers by severall injuries.
The police version of what happened insists 5 police officers were injured and only 2 protesters, but the truth that we all know happened, was that lots os people were injured, I mean, most people were injured, and only five cops had the same treatment.
The mates that were arrested were received outside the courthouse by many anti-fascist supporters, with joy and cheers, so that they know, we will always be together, and no mate should be left behind. Every prisioner is political!
It was since long time, the first time in portugal, that people stood (at least for 5 minutes) for something they believe in.
The first time I've seen us trying to withstand the riot police charge, and who knows, maybe next time, we can.
videos:
talking and pictures:

http://www.tvi.iol.pt/mediacenter/home.php?tipo=2&art_id=&amp;mul_id=5695797&pagina=1&psec_id=
- Expresso (pictures of the demo and the confrontations):

http://expresso.clix.pt/Multimedia/Interior.aspx?content_id=389405
- Expresso (video of the repression):