After turning away from the lure of warm beer and a cover of John Lennon's Imagine at the official Merseyside TUC rally, ten activists from the Liverpool Social Forum picketed the Army recruitment office on James Street, to try and stop young scousers fighting and possibly dying for oil in the Middle East. 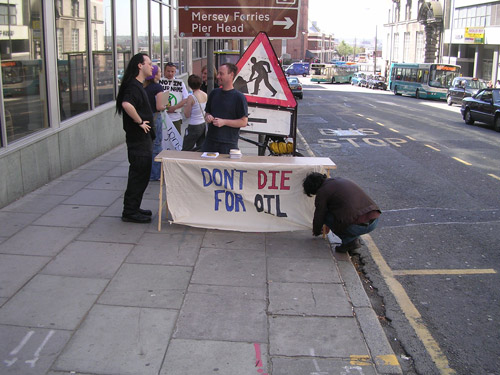 The neatest banner in the world is successfully attached. 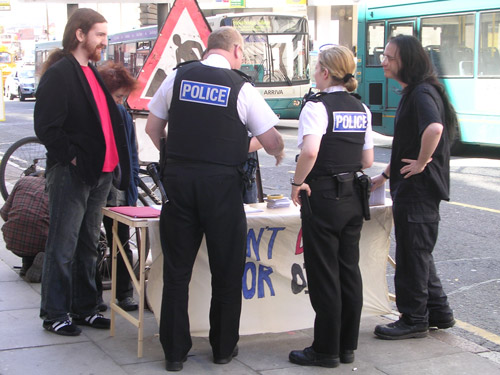 No it's not blocking the highway. The sign is. And your van.

It was our second picket at the James Street offices, and our second go at finding new tactics which will break the Stop The War Coalition chokehold on the anti-war movement. And since it was May Day, what better way to show solidarity with Iraqi and Afghan workers than stopping a few guns from being pointed at them?

Unfortunately we were minus our megaphone, since it was stolen by a group of gangsters called Merseyside Police at a protest last week. However, we still managed to hand out a lot of propaganda to passers-by and potential recruits, and we engaged many locals in conversations about the army, the drive for oil, and the fucked-up nature of capitalist society in general.

Her Majesty's Constabulary paid us a visit, and after a farcical debate about whether our table or the sign behind it was blocking the pavement, they left us alone. After all, we didn't have a megaphone to swipe. And it wasn't as if we were animal rescue workers.

I said it last time, and I'm going to say it again. Wars won't be stopped by petitions, marches or 'left' politicians. We need to organise in our streets and our workplaces. We also need to make the link between capitalism's demand for oil profits abroad and attacks on living standards at home.

So what are YOU going to do in the fight against war?