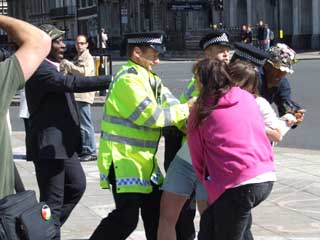 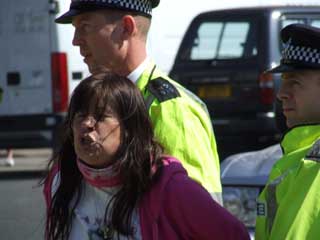 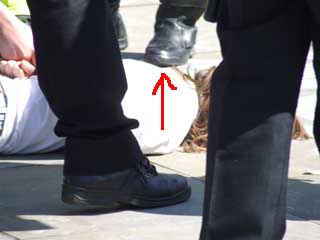 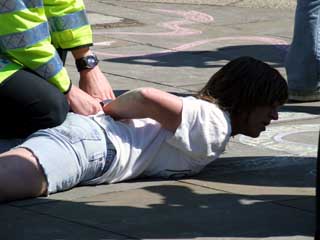 At 11am a group of 6 police approached Charity about a, "Bollocks To Blair" placard. It looked like they wanted to confiscate it, Charity held onto it and after a tussle was forced to the floor and stood on by police. This was in front of her distraught 8 year old daughter who was only feet away, she was in tears and comforted by a student who was in the square working on an art project. Barbara and Brian were also restrained by the police, but they were not arrested. The police took Charity away leaving her daughter in Parliament Square, for some time the police refused to say where she had been taken, but eventually revealed it was Charring Cross. Charity was finally released without charge and reunited with her daughter at about 18:00. 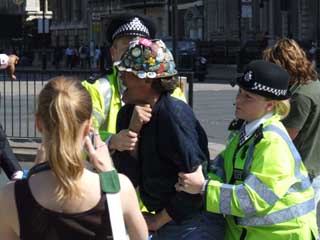 in a famous 'sex pistols' trial, "bollocks" was deemed "rude, but not offensive".

police had no right to intervine.

this is once again politically motivated harassment.

stephen jago began his trial, representing himself, at horseferry road on monday. he is charged with a socpa offence on june 18th last year, and with assauling a police officer.

he had been standing outside downing street with a white banner that simply quoted orwell's "in a time of universal deceit, telling the truth is a revolutionary act", and an anonymous "no man deserves punishment for his thoughts".

in the trial, which continues on friday at noon at horseferry road, steve jago will be using human rights arguments and asking for a legal defenition of a 'demonstration' in his socpa case. the allegation of assault on a police officer, while serious, is unlikely to be a problem. the officer concerned was on the stand on monday, and he couldn't point out anywhere on the police cctv footage that the offence occured, (although we could all see the "home office-approved ditraction technique where pc gill violently knees steve in the thigh). further independent footage was shown by steve, and once again, pc gill could point out no violence towards police. there seems to be no other evidence of this assault.

you can play spot the assault yourself, by checking out

trial continues ay noon at horseferry road on friday. also barbara tucker will be starting her trial (finally) for a socpa offence. she's been harassed by police in parliament square and downing street for more than a year, but despite 'reporting her for possible summons' nearly a hundred times, this is the first time their 'reports' will be tested in court. 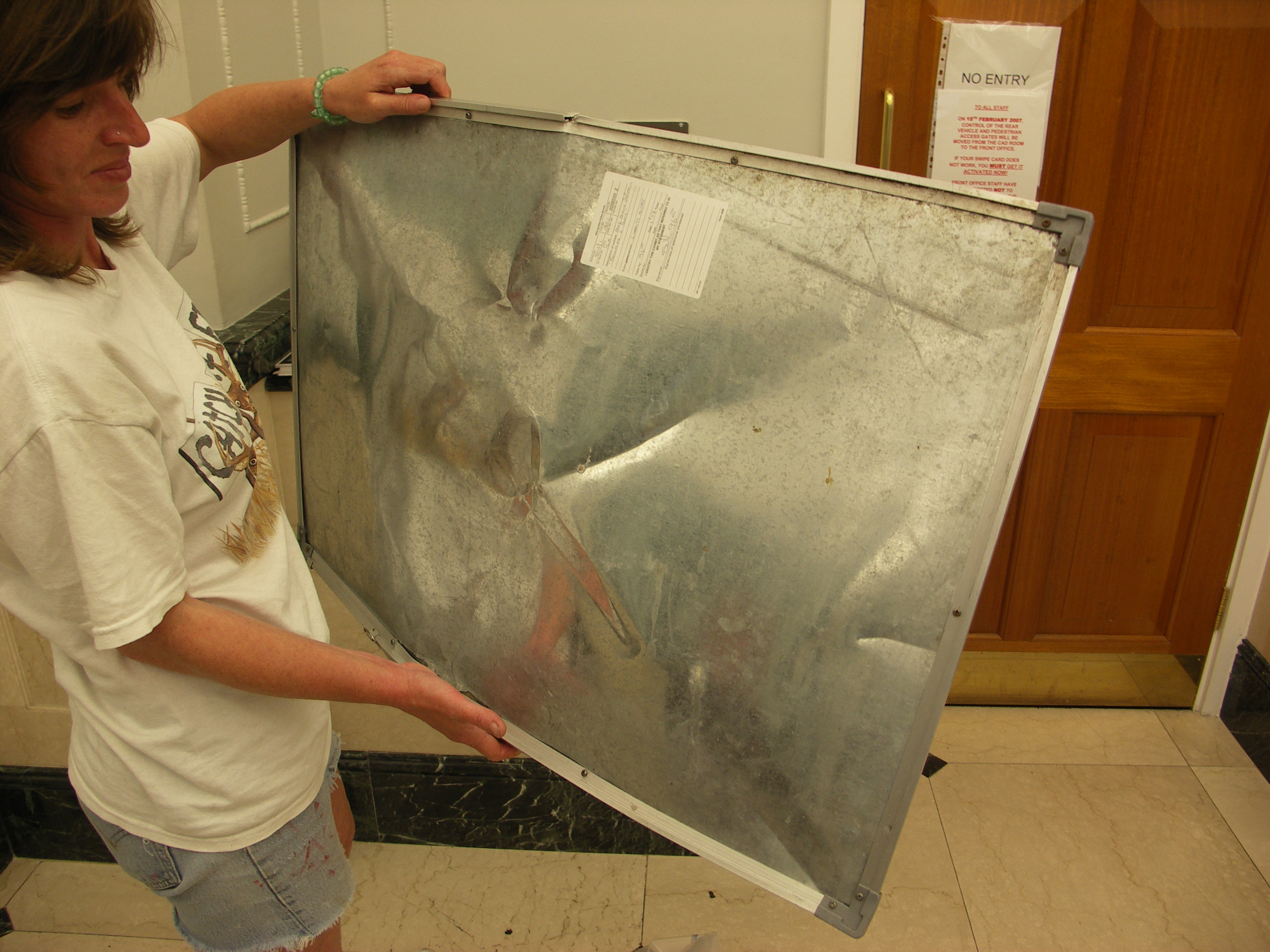 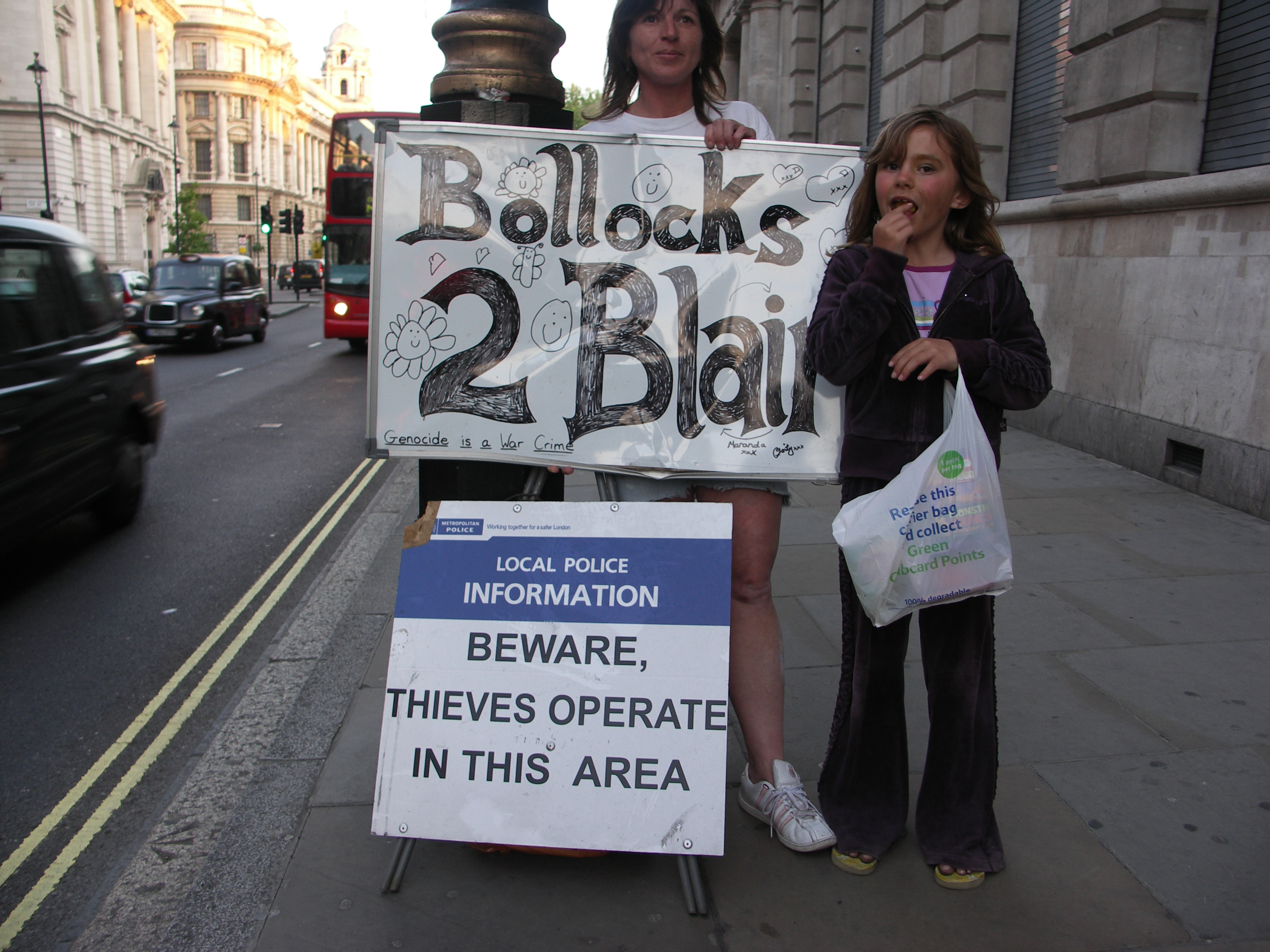 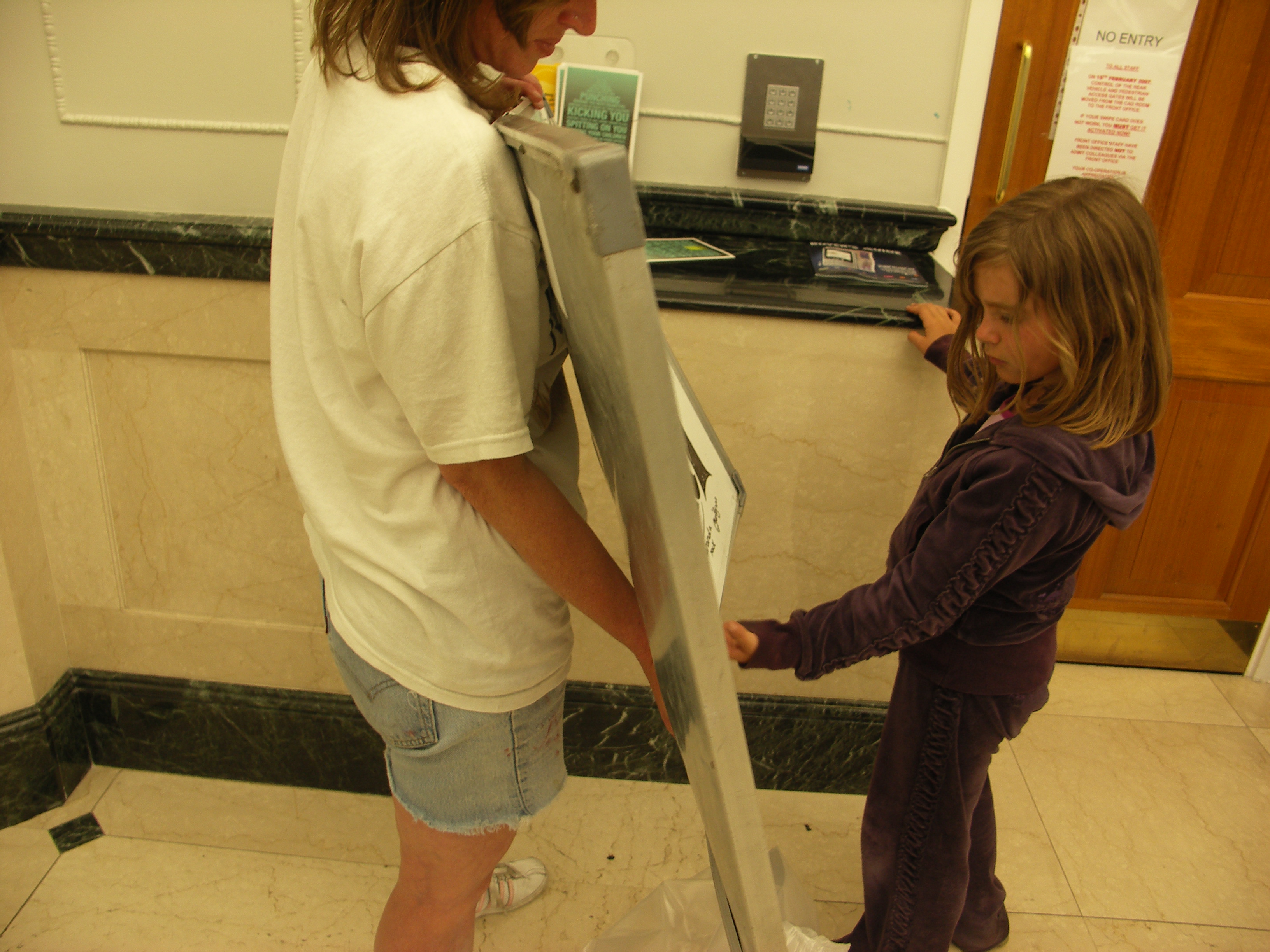 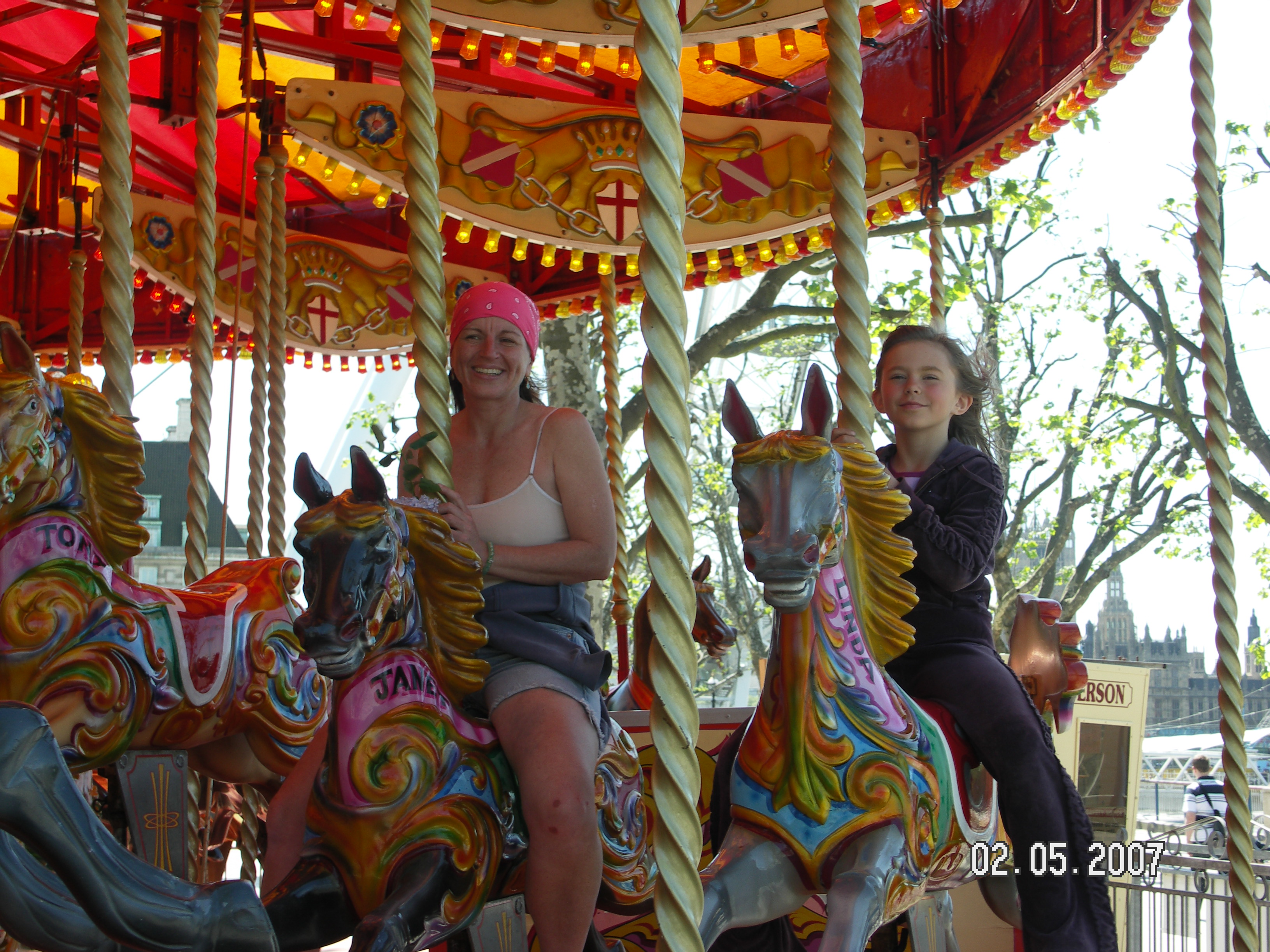 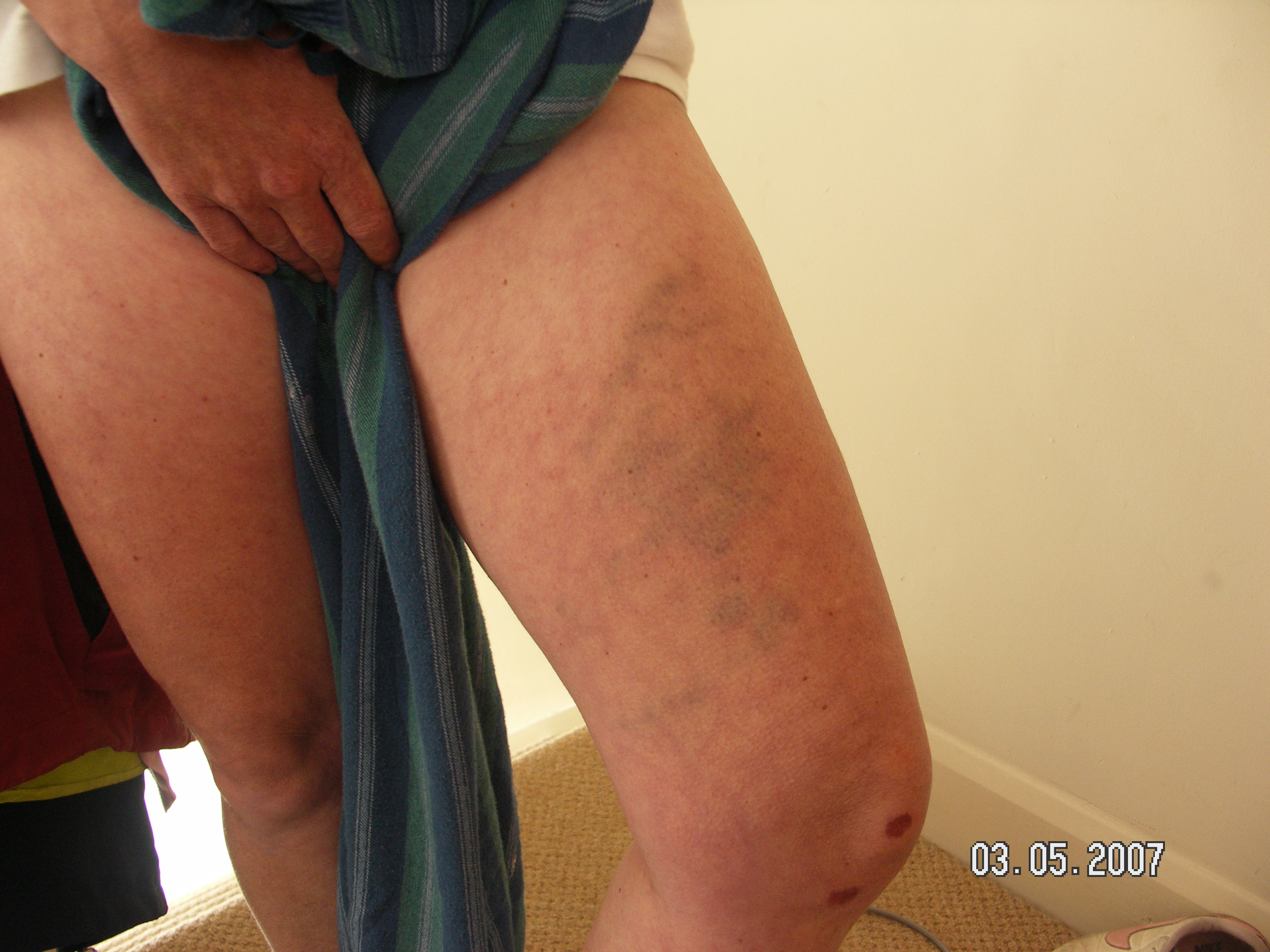 After walking the streets of London, for the past few weeks, and explaining to endless plod that what I was doing, exhibiting my art on a common whiteboard as is found in many offices and classrooms with bollocks 2 blair is completely within my rights... and making numerous amounts of the British public smile... I was assaulted by said plod???

They stole my property which they had no legal right to do.

They violently assaulted me in front of my 8 year old child.

They left my child, as far as they were aware, unattended in Parliament square with an impending potentially confrontational prosession about to begin.

It was only after being held in the van adjacent to Parliament for approx 20 minutes, being stuck in rediculous traffic, due to said March another 30-40 minutes, had been delivered to Charing Cross police station, did any of these assholes enquire after my Maranda.

I am going to have their guts for garters!

I was mugged, assaulted and kidnapped in front of my child without any legal justification... without ANY due care or concern for my child?

I invite you to view Bollocks 2 Blair part 1 and 2 on youtube.com

This will give you the broad picture of what was happening before this bloody nightmare began.

Absolutely disgusting behaviour on behalf of the MET.

This was a politically motivated atack on a mother of three children, in full view of the public, in front of parliament.