His veto of a Bill that would fund wars in Iraq and Afghanistan with $US100 billion was allegedly a rejection of attempts by Democrats who control the US Congress to force him into a shift in strategy in the unpopular war? 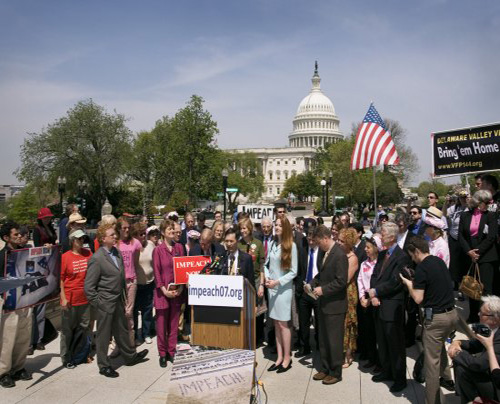 US war criminal president George W Bush has vetoed legislation that would have required him to begin withdrawing US combat militants from Iraq this year.

The move has set up a new showdown? [with Democratic] leaders over funding the war?

Bush's veto, only the second of his presidency, came on the four-year anniversary of a speech he delivered announcing the end of major combat operations in Iraq beneath a 'Mission Accomplished' banner.

His veto of a Bill that would fund wars in Iraq and Afghanistan with $US100 billion was allegedly a rejection of attempts by Democrats who control the US Congress to force him into a shift in strategy in the unpopular war?

Since Democrats do not appear to have enough votes to muster a two-thirds majority in Congress to override the veto, compromise talks between them and the White House are expected to take place.

Congressional leaders are expected to meet Bush at the White House today.

Washington D.C. Roils; Impeachment Fights it Way onto the Table

The air in Washington was electric last week as writers, actors, activists, former and current government officials gathered Wednesday across from the Capitol. This was the moment to break out the movement to impeach Bush and Cheney. The specter of a constitutional showdown between the White House and Congress was percolating over the Democrats inclusion of a time line for withdrawal from Iraq in the War appropriations bill. Revelations, accusations, and subpoenas against the Bush Administration were mounting daily. Bush and Cheney, bellicose as ever, made clear their determination to go ahead with their full program — accelerating the Iraq escalation, threatening Iran, re-writing legal procedures to even further limit Guantanamo detainee's access to lawyers, hailing the theocratic, anti-women Supreme Court decision restricting abortion rights — all while defending their lying legal architect of torture, Attorney General Gonzales…
In discussions after the press conference, participants spoke of this week being a beginning, perhaps a turning point. Great turmoil over the future is being fought out in Washington's halls of power. The action of these well known voices of conscience was a new step in carving open political ground for a movement gathering from below to demand real change: to stop the war, to prevent a future war against Iran, and the impeachment of Bush and Cheney to reverse direction and hold this administration accountable for their real crimes against the people of this country and the world. more

Congress passed the Supplemental Appropriations Bill authorizing $124 billion more for the Iraq war, with a timetable to begin withdrawing American troops Oct. 1st. Bush is expected to veto the bill this coming Tuesday or Wednesday (May 1 or 2). MAKE PLANS TO PROTEST NOW at 5pm the day of the veto. Call the press and tell them the people demand Stop the War NOW!

Bill Clinton: “Hillary let me lay it out for you. God told Lot’s wife not to look back. When she did God turned her into a statue of salt. Lets look at where we are now. We went to Iraq to steal their oil because America uses 22 million barrels of oil every day and imports 12 million barrels of oil a day at $65 per barrel. No other country uses even 2 million barrels of oil per day. The American people would rather sacrifice their children in Iraq than give up their Sunday drives in their SUV’s. So we still need Iraq’s oil.”

These killings are only the beginning of an escalation of the US-led counterinsurgency war in Afghanistan during the spring and summer, even as more troops are also being sent into Iraq. In addition to the US and British forces, in recent months Australia and Germany have also agreed to send additional equipment and soldiers to Afghanistan in an effort to crush mounting opposition.

More than 100 US soldiers in Iraq killed in April

The death toll for US soldiers in Iraq climbed to at least 104 in April—up from 81 in March—making it one of the deadliest months for US troops since the March 2003 invasion of Iraq. US military fatalities have topped 100 a month only five times since the war’s beginning, according to the Associated Press. A total of 3,351 members of the US military have died since the war started, with another 24,314 wounded.

"We're trying to stop them from murdering more innocent people and we are saying you can't profit from it.

War criminal Blair to step down in 'next few weeks'

War criminal Tony Blair has endorsed long-standing finance minister Gordon Brown as Britain's next leader and says he will announce next week when he will step aside as prime minister.