A re-assuring 2/300 people joined the autonomous bloc on the TUC March yesterday for a good natured and increasingly liquid stroll through London to Trafalgar Square. As ever police presence was high and way over the top but the march passed without incident and no arrests were made. 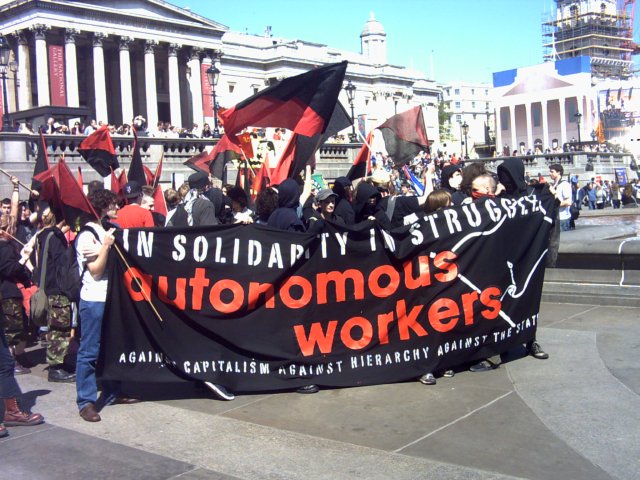 At the Square the bloc briefly took residence at the front of Nelson's Column, resulting in an amusing battle of the banners with the trots (which we won) and some terse discussions about the origins of the Labour Movement. As the speakers droned on about Health and Safety legislation and the minimum wage, the red and black flags scattered throughout the crowd pointed to a different kind of resistance to the reformist wank dribbling from the stage.

Chants of "Escalate the Class War" and "All Coppers are Bastards" lent a nice retro feel to the day as did the presence of Class War and Antifa. the Poll Tax riots is was not however, but in the current mood of doom hanging over the anarchist movement in the UK it was good to see faces old and new back out on the streets.