One arrest with photo of police using "pain compliance" techniques. Police take photos but do not like being photographed. 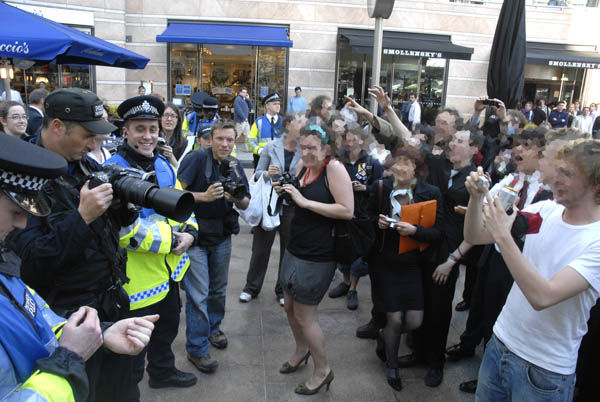 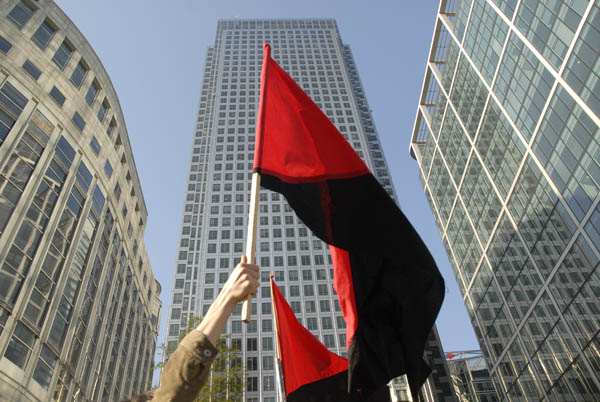 A banner flies at the centre of capital 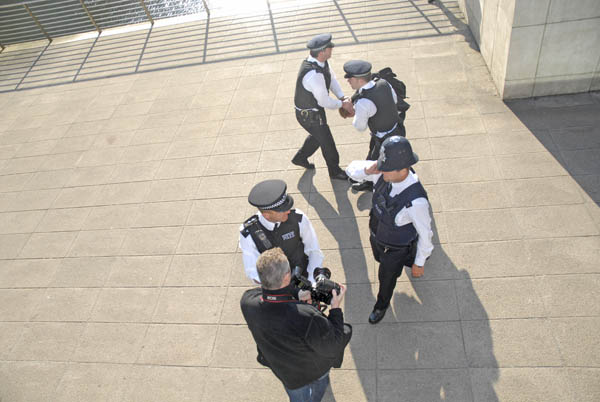 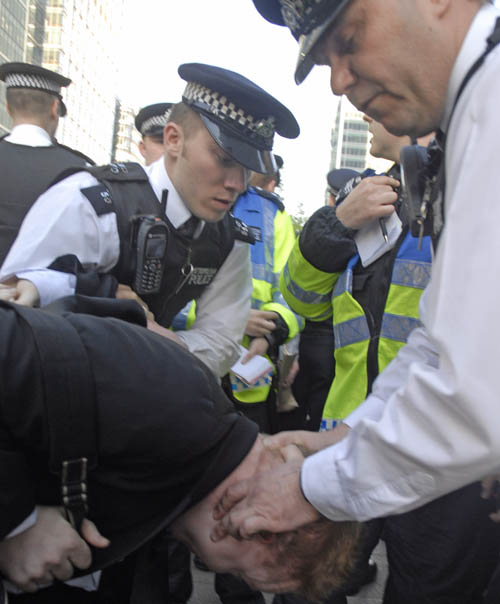 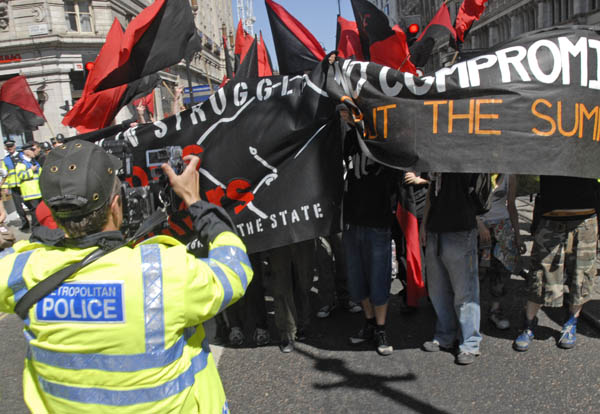 Police photographer in action on march

A beautiful sunny day for the May Day march ended with a protest at Canary Wharf, where activists sarcastically bowed to the leviathan of money with its great alters to the god of finance that are the high rise corporate money houses of Canary Wharf.

Police, both on the march through central London and at Canary Wharf, where present in roughly equal in numbers with anarchist marchers and protesters.

Three police photographers where employed to record faces while other officers spoke into mics on their wrists. When one arrest was made at Canary Wharf the Evening Standard's photographer was intimidated and screamed at by one officer to move. However he did not appear to be causing any kind of obstruction to officers. It appeared an intimidating and unnecessary act. There was a report of another journalist being assaulted by a police officer with an open handed blow to the solar plexus.

In one of the photographs of the arrest you can see a police officer pressing his fingers into the arrestee's head at pressure points. This is a technique known as "pain compliance". It looks extremely painful. Again one cannot help wondering if this was necessary?

Generally it was a good humored event which ended with dancing a beach on the banks of the River Thames.

A few more photos can be found at www.flickr.com/photos/gitboy and lots more at

Forwards Intel were out in force, with three seperate cameramen following our every move.


The Autonomous Bloc was slightly smaller than last year, but vocal and vibrant, and there was a great atmosphere during the march. Everyone seemed happy and relaxed, and a reassuring number of people in masks meant that anonymity was available for those who desired it.


The police were out in force, especially around the Autonomous Bloc, but seemed cowed by the energy and volume of the march. As far as I could tell, they made no serious attempts to disrupt or spoil the march.


Once again, significant and varied participation by immigrant groups added colour and interest to the march. We may not live in a utopia but I find it comforting to think that thanks to the struggles of the british people, political exiles from other countries can parade proudly through our streets with us in defiance of their own rulers as well as ours.


The Autonomous Bloc entered Trafalgar unchallenged, and marched straight into the railed-off area in front of Nelson's Column, despite the protests of a few appalled Trots. In respect for the wishes of the organisers, we didn't quite rush the stage, but we merrilly waved the Red and Black in front of a variety of speakers.


At around five, crowds gathered in Canada Square, to find a large and grumpy police force waiting for them. Many of the officers seemed to have come looking for a fight, and lots of people were searched and threatened with little regard for the law.

During this, I had one of the best moments of my day, standing in a bar dressed as a yuppie, pretending to be an appalled Yuppie to another protestor dressed as a Yuppie.
"Why are all the police here? This isn't normal..."
"Apparently there's going to be some sort of protest or something..."
"Oh. Well, so long as they don't molotov me, I don't mind."


The locals seemed unsure how to respond to the protest. Few if any joined in the party, doubtless intimidated by the police presence.


The first of three brutal and needless arrests marked a downward spiral in the behavior of the police, who became increasingly violent, aggressive and offensive until the march finally escaped their jurisdiction by reaching the beach.

The police photographer at Canary Wharf really didn't like it when he was crowned May King, and suddenly all the people he'd been taking photos of rushed towards him cheering him on.

I've never seen a policeman so perplexed, it was marvellous.