Sadie Graham, the BNP's East Midlands Organiser, has taken Brinsley ward in Broxtowe, beating three other candidates. She has claimed a seat on Broxtowe Borough Council, following last week's local elections. She polled 439 votes in Brinsley, in the west of the borough.

Reverend Robert Murray, a local vicar running as a Labour Party candidate, received 295 votes, while independents Kenneth Phillips 109 and Wlady Wilhardt polled 185. In the last borough council elections, the BNP received 43% of the vote, but were beaten by Labour in a two horse race. This victory comes despite anti-fascist activity in the ward, including leafleting and a meeting. Attended by around 40 people, this event took place in February when Graham was the only candidate to have put her hat in the ring. 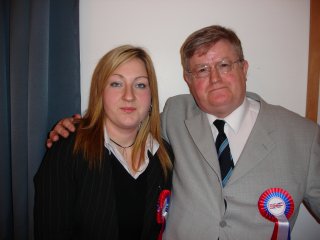 Sadie Graham with Paul Snell (BNP candidate in Heanor in 2006)

Elsewhere in the country, BNP successes appear to have been muted. The party fielded 750 candidates, hoping to extend its tally of councillors from 46 to 100. They don't appear to have gained significant numbers of seats, but have increased their vote in many areas. In some places they have been able to garner almost twice the number of votes of their Labour party opponents.

While we should be thankful for small mercies, it is clear that anti-fascists are going to have to sort their act out, nationally and locally. The BNP are likely to use their successes as a springboard for the next general election and to develop their growing power base. Evening Post coverage: http://tinyurl.com/362sz3