stephen jago appeared at horseferry road magistrates court on monday and friday this week, and judge purdy found him guilty of demonstrating without authorisation but acquitted him of assaulting a police officer. he intends to appeal against the conviction for which he received £100 fine and £100 costs. 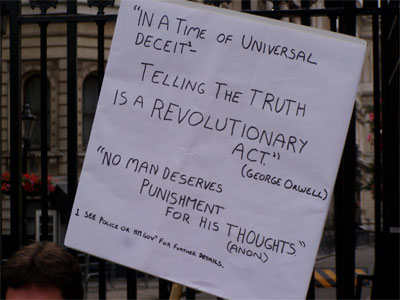 steve's banner that led to arrest 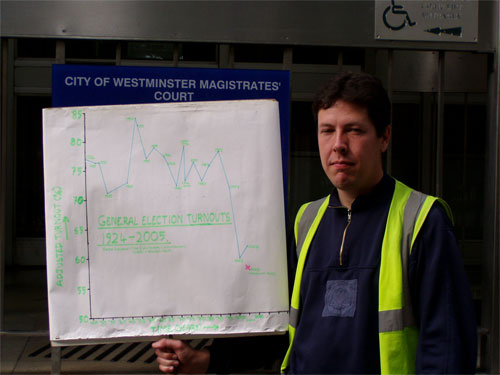 steve with voting chart outside court

the events relating to this trial took place on 18th june last year, when steve stood outside downing street with a banner that quoted george orwell "in a time of universal deceit, telling the truth is a revolutionary act" and the anonymous "no man deserves punishment for his thoughts" - the word 'deceit' had a footnote which read 'see police or hm govt for details'.

steve was approached by police who warned him and then wanted to 'report' him 'for possible summons' for unauthorised demonstrating. as he was known by charing cross police as a regular visitor to brian's protest in parliament square he told them his name 'steve' would suffice, and any summons could be delivered to him at the square.

police were not satisfied by this and told him they would arrest him instead. he did not resist the attempt to arrest him, and indeed, the police didn't charge him with resisting, but he did take exception to being handcuffed, as he was a peaceful protester not given to violence in any way making handcuffs unnecessary. despite steve's protestation, pc gill proceeded to forcibly put handcuffs on steve and aided by two other officers and using a 'home office approved distraction technique' (a very hard knee to the thigh), he eventually got the handcuffs onto steve in the rear stack position (normally reserved for violent criminals).

in the police car and at the station he was told he was under arrest for the socpa offence, and he went through the usual custody process. he asked to see a nurse to record injuries he had received in the arrest, and after an hour this was granted. he told the nurse he intended to press charges of assault against the arresting officer, and it was only after the custody nurse had made some sort of visual contact with pc gill that the officer then further arrested steve for assaulting police.

in court pc gill claimed that steve had repeatedly and violently elbowed him including an attack to his jaw, but he hadn't realised just how badly he was hurt until more than an hour later. he was adamant there had been no sort of signal from the custody nurse.

in support of this allegation, the police presented cctv footage taken from a camera across the road, but pc gill couldn't show the court a single instance of elbowing, claiming instead that the main attack had occurred earlier than that particular footage and/or also that buses and other large vehicles passing by were interrupting the view, possibly at the precise moments of these attacks.

pc bones took the stand, but unfortunately he was no help either, stating that he at no time had actually seen steve elbowing pc gill. jeez, if you can't even count on your own colleagues!!

in his defence, steve showed footage taken by this indymedia reporter who was there on the day. the film was taken from very close by, was continuous, and was very clear. steve invited pc gill to identify a single violent elbowing, but he claimed that all these strikes must have happened while his back was towards the camera (presumably at exactly the same moments as buses and other large vehicles obscured the view from the cctv too). judge purdy invited pc gill to look at the footage once more and at least try to identify the moments he believed these attacks had happened to see if there might be some movement of his body that would indicate reaction to these blows, but pc gill declined. pc bones however did manage to identify a point when he had accidentally struck gill in the face with part of the banner. this had hit his right jaw, but gill was adamant that steve had struck his left jaw.

the judge asked police to provide cctv footage from inside the police station and this was shown to the court on friday.

steve jago was representing himself having initially been refused legal aid (although this was granted just before the trial and rather too late in the day for him to instruct solicitors). after spending a short time on the ludicrous and clearly malicious assault allegation in his defence sum-up, steve then went on to the matter of socpa. in a thoroughly thought-out legal argument, steve pointed out that the word 'demonstration' is not defined in the act, and its definition when taken one way could lead to problems with human rights compatibility, while taken another would find him 'not guilty'.

within the oxford english dictionary, the most pertinent definitions are "a manifestation or outward display of feeling or quality", "an exhibition of public opinion on a political or other question" or "a show of military force or of offensive movement". steve argued that the first definition would outlaw smiling or cheerfulness outside downing street, and so could be disregarded.

while the second definition may seem to concur with common sense, it presents human rights difficulties. citing article 10 - the freedom of expression - and a house of lords ruling in which the courts are "specifically charged by parliament with delineating the boundaries of a rights-based democracy" (archbold: criminal pleading, evidence and practice 2007, ch16-30), steve argued that in a 'rights-based democracy' any restrictions to article 3 must be necessary in response only to a 'pressing social need' (sunday times v uk), and that any interference must be 'relevant and sufficient' and only 'proportionate to the legitimate aims pursued' (handyside v uk).

he referred to a chart he had drawn up based on electoral commission figures showing an unprecedented and mammoth drop in numbers bothering to vote since tony blair came to power. in a lovely turn of phrase he pointed out that in the context of this worrying trend "the people should be encouraged to participate in democracy, not discouraged, or worse, threatened, attacked, arrested, tortured, and finally, imprisoned at the hands of the government's army of occupation - the metropolitan police".

by accepting the definition of 'demonstration' as "an exhibition of public opinion on a political or other question", the socpa legislation inserts a time-based legislative and bureaucratic obstacle in the way of engagement with democracy through peaceful protest at a time when it is essential to encourage active political participation. the government might argue that socpa is essential in terms of a 'pressing social need' to control terrorism, serious disorder and civil disobedience, but the idea that terrorists hide behind placards is ridiculous, and there are public order acts that already effectively control situations of civil disobedience, riot, obstruction and so on.

rather than arguing that the socpa law directly contravenes human rights (as has failed in previous cases), he suggested that it all depends on the definition of demonstration, and if "show of military or offensive movement" were used, then this would be fully compatible with the stated intention of the law as a response to 'pressing social needs' such as the threat of terrorism ('military force') and serious public disorder or disobedience ('offensive movement').

by defining demonstration this way, it would lead to an acquittal for steve, and protect the liberty of citizens to exercise their rights of freedom of expression by protesting and campaigning freely in peaceful ways as the principle of a rights-based democracy dictates.

judge purdy gave some thought to steve's arguments and then began his ruling on the case.

with respect to the assault charge, he described that pc gill's version of events was effectively uncorroborated. the video evidence did not indicate any hint of violence from steve. under oath, other officers couldn't back up pc gill's allegation, and as far as the 'curious and sinister' incident of a look shared between the custody nurse and gill just prior to his accusation, the judge noted that cctv footage from inside the police station "broadly replicated" steve's description of the event. so, the assault charge was dismissed as a safe conviction would be impossible.

judge purdy didn't respond to steve's definition argument with respect to human rights, instead saying that as steve had been holding a banner and wearing a 'serious organised criminal' vest, "common sense would dictate" he was demonstrating. he cited 'blum and others v dpp' in which socpa had been found compatible with human rights (with no definition of demonstration offered) and so he found steve guilty.

prosecution asked for £450 costs, but purdy wasn't happy about the assault allegation steve had had to defend and reduced these to £100 with a £100 fine for the socpa offence.

steve has leave to appeal. he also asked judge purdy to move a charge of 'perjury' against pc gill who had made the malicious allegation, but purdy claimed it was not a matter for him to act.