Bollocks 2 Blair - genocide is a war crime
Bollocks to the MET - mugging, assaulting and kidnapping me in front of my child.
What goes around comes around and there is gonna be hell to pay for the actions of some members of the MET!

What in God's name must the good officers of the Met think when they witness their colleagues abusing women and the law in broad daylight?

Sir Ian Blair - Bollocks to you for bringing the good officers of the Met into disrepute for your criminality! Bollocks to you!
Formal Complaint – Statement of Fact ‘Whiteboard Crime’

A. Illegal seizure of personal property:

A piece of my artwork on a whiteboard was illegally seized tantamount to a mugging. Said property was later returned on the same day from Charing Cross Police Station (CX) only after my eight year old daughter was demanded to be present to sign for said property. (?)

The mystery of the ‘whiteboard crime’ begins…

I would assume that the majority of the Metropolitan Police force is familiar with Mr. Brian W. Haw and his Peace campaign located at Parliament Square, Westminster, London, England.

Mr. Haw’s “demonstration” as the word is currently undefined within SOCPA legislation – the Serious Organized Crime and Police Act – is an “authorized” “demonstration” although being exempt in a reasonable rational sense of the legislation and despite no longer currently being recognized as such given the current political climate of the judiciary.

Under current state imposed “conditions” of Sir Ian Blair, Mr. Haw is currently “allowed” 19 members of humanity to be physically present with him in Parliament Square to support him in his “allowed” 3meter X 3meter X 1meter heartfelt expression of his humanity – a campaign for global peace. This is a complete nonsense in my mind.

54% of the Channel 4 viewers who participated and voted for their choice of the award ‘Britain’s most politically inspiring individual’ chose Mr. Haw which reasonably suggests that numerically speaking, more than 54 people in Great Britain alone, support Mr. Haw, let alone globally, as he is world renown and globally supported despite said people not being physically present in Parliament Square.

How could 19 people realistically resemble or possibly represent the global call for PEACE he has sustained for almost 6 years, which he alone has inspired within humankind?

Regardless of that fact, I as a human being and a mother of 3 children, including my children are guaranteed Freedom of Assembly through Article 11 of the Human Rights Act (HRA) as penned into English law in 1998 by Mr. Tony Blair. As such, my youngest daughter and myself were legally entitled to peacefully assemble together at Parliament Square and play hopscotch on the pavement.

Regardless of that fact, on May, 1, 2007, it was clearly asserted by various members of the public including Mr. Haw and Mrs. Tucker that I was present as part of the “authorized” “demonstration” of Mr. Haw, as one of his 19 “allowed” supporters – my youngest daughter being another supporter. I was further falsely arrested at CX, while in cells, for “demonstrating ‘outside’ the SOCPA zone as the same arresting officer who had already violently assaulted me on the pavement, did not have a ‘Scooby do’ clue as to what he was talking about or what he had been told to further arrest me for. Malicious? Hmmm…

He was only doing as he was told to do by which idiot(s)?

I am an artist and I was clearly exhibiting a piece of artwork.

Only the day before, I had chalked my artistic expression, as also guaranteed through Article 10 of HRA - English Law, onto the pavement of Parliament Square, in front of the statue of Winston Churchill – PEACE IS POSSIBLE.

On numerous occasions the Metropolitan Police (the MET) have threatened to arrest me for criminal damage (?) for drawing pictures on public pavement, where free access is granted to the public, with “washable sidewalk chalk” causing me harassment, alarm and distress – an assault by legal definition.

“In the beginning was the word and the word was with God” - the Bible.

I fail to understand the rational behind such asinine behavior. One does not expect to be threatened with arrest and a criminal record for drawing pictures that will disappear with the next rainfall.

The first movie I ever saw in a movie theatre was ‘Mary Poppins’. I do not remember any member of the police force, in any scene from that movie, threatening Dick Van Dyke with arrest.

The state is making a farce of the police, which is completely unacceptable in my mind. The police are a vital organ of any civilized society including doctors and nurses and firemen and ambulance drivers etc. and should be treated with respect, no be ordered by their superiors to commit criminal acts.

I would assert that the while the majority of the Met are just and decent people simply trying to do their job and uphold the law, there are numerous ‘bad apples’ who enjoy abusing their position of power against the peaceful public. I believe the correct terminology for such ‘people’ to be sadists and masochists.

N.B. It has also been brought to my attention that many Met officers are not comfortable with enforcing SOCPA as they are being made fools of and scapegoats for the state, reducing policing to a farce.

B. Assault and Battery:

Using “pain compliance” techniques on a pacifist until she uses profanity solely directed at her attackers instead of physically retaliating to said violence in order to create an offence and further entrap a peaceful member of society is unreasonable, to say the least.

All officers present on May 1, 2007 were clearly and loudly, verbally warned that any use of physical force would be legally deemed an assault and battery, should and injuries be sustained which is exactly what happened.

Numerous, various officers publicly exhibited absolutely disgraceful behavior on behalf of the state within exactly what legal framework without any provocation not any justification.(?) I assert that this was an ‘ARREST TO ORDER’.

I am presently covered in bruises and my skin is broken is various places.

I was falsely arrested for ‘breach of the peace’, which is “taking the piss”, for swearing at my attackers instead of crying out in pain?

For the love of God, I was physically attacked by a gang of ‘men’ – 20 OFFICERS, in broad daylight, in a place of public access, while my property was illegally seized with violence.

All officers present for said planned attack were causing my daughter harassment, alarm and distress interestingly deemed an assault against a child within English law and reality.

This entire fiasco took place within 2 meters of my 8-year-old child.(???)

In front of my child, I was kidnapped as reported and recorded by a 999 call to Scotland Yard on the day.

The police terrified my child through assaulting her mother in her presence, right before her very eyes. The MET made her cry and then denied me my right as a mother to soothe her distress and console her fears by placing my arms around her due to the fact that my arms were secured in rear-stack handcuffs with various officers using “pain compliance” techniques to force my compliance to exactly what?

My Human Right as guaranteed by Article 5 of HRA - English law, was squashed by the booted foot that was stomping on my shoulder in order to force me and my face into the pavement.

The Met have no authority to abuse the public in such a fashion, to subject a mother to such degrading and inhumane treatment in front of her child, in full view of the public present.

It is my clear understanding that the actions of any public authority are legally obliged to incorporate Human Rights into their workplace and into their actions as a SERVANTS OF THE PUBLIC.

Have the Met taken leave of their senses? I have a very clear right to pose this question.

My 8-year-old child was forcefully abandoned by the Met in Parliament Square, in central London, with an impending ‘neo-nazi’ march about to begin.(?) This fact cannot be legally justified.

When all officers present for the attack had been watching me for at least one hour beforehand while planning their assault, and were entirely aware that I was present with my daughter, an 8 year old child, why did not any officer enquire as to her welfare until I had arrived at CX? She had just witnessed her mother being mugged, assaulted and kidnapped.

Exactly what time was I illegally arrested and what caused the gross delay of arrival at CX? Could it have possibly been the traffic jams that were caused by said “fascist” march?

Once again, have the Met taken leave of their senses?

The Met have purposefully endangered my child and quite literally, physically stomped all over our human rights which I, as an intelligent woman and a mother, will simply not tolerate.

Over the past few weeks, I have explained to numerous, various police officers, PCO’s, the RIOT SQUAD (sent to deal with a woman exhibiting art?) etc. the following:

Sid and Nancy, specifically the SEX PISTOLS created an album ‘Never Mind the Bollocks’. The title of this album was challenged by the state in the High Courts and the British slang word ‘bollocks’ was exonerated from the realms of profanity and deemed merely rude.

Sid and Nancy won their case of ‘Never mind the bollocks’.

The rather lame excuse so often used by Met police of “context” regarding the expression of “bollocks” is not a rational excuse nor reasonable legal justification for said illegal seizure of my personal property, let alone the ridiculous events of criminal behavior by police.

The ludicrous assertion of various officers of the state to “comply” without any legal justification nor any sound reasoning is pathetic and makes a mockery of democracy and nonsense of English law.

The state using physical violence including ‘pain compliance’ techniques in assaulting a peaceful member of the public, in a place of public access, for exhibiting art and playing hopscotch, is lunacy.

The Met police challenging a High Court ruling on the pavement, using brute force and criminal behavior, to say the very least, is a very clear abuse of unfettered powers granted by exactly who?

Is exhibiting art a criminal act in English law?

Is it a criminal act to peacefully stand with a whiteboard penned with black ink, created by a mother and daughter, that makes the public smile? 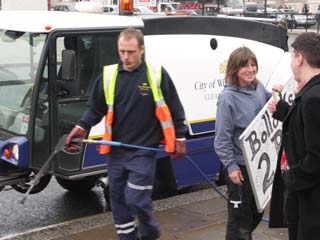 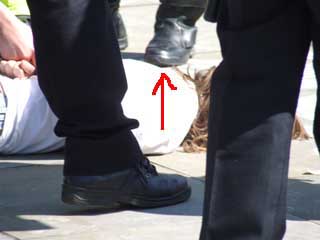 copyright Moris - Which 'pig' of a man was stomping on mjy human rights? 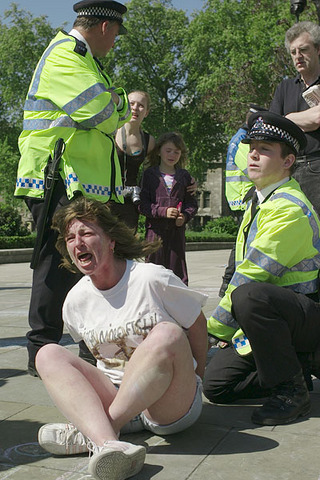 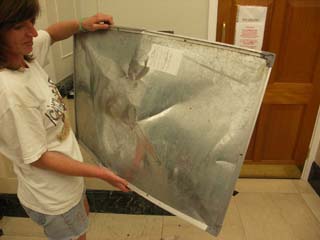 Can you imagine how i feel afetr being atacked by 20 Met goons? 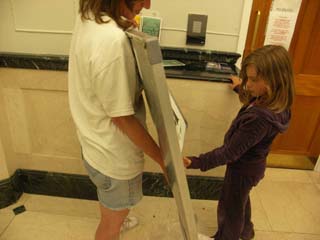 Chich asshole from CX demanded that my 8 year old sign for her property? 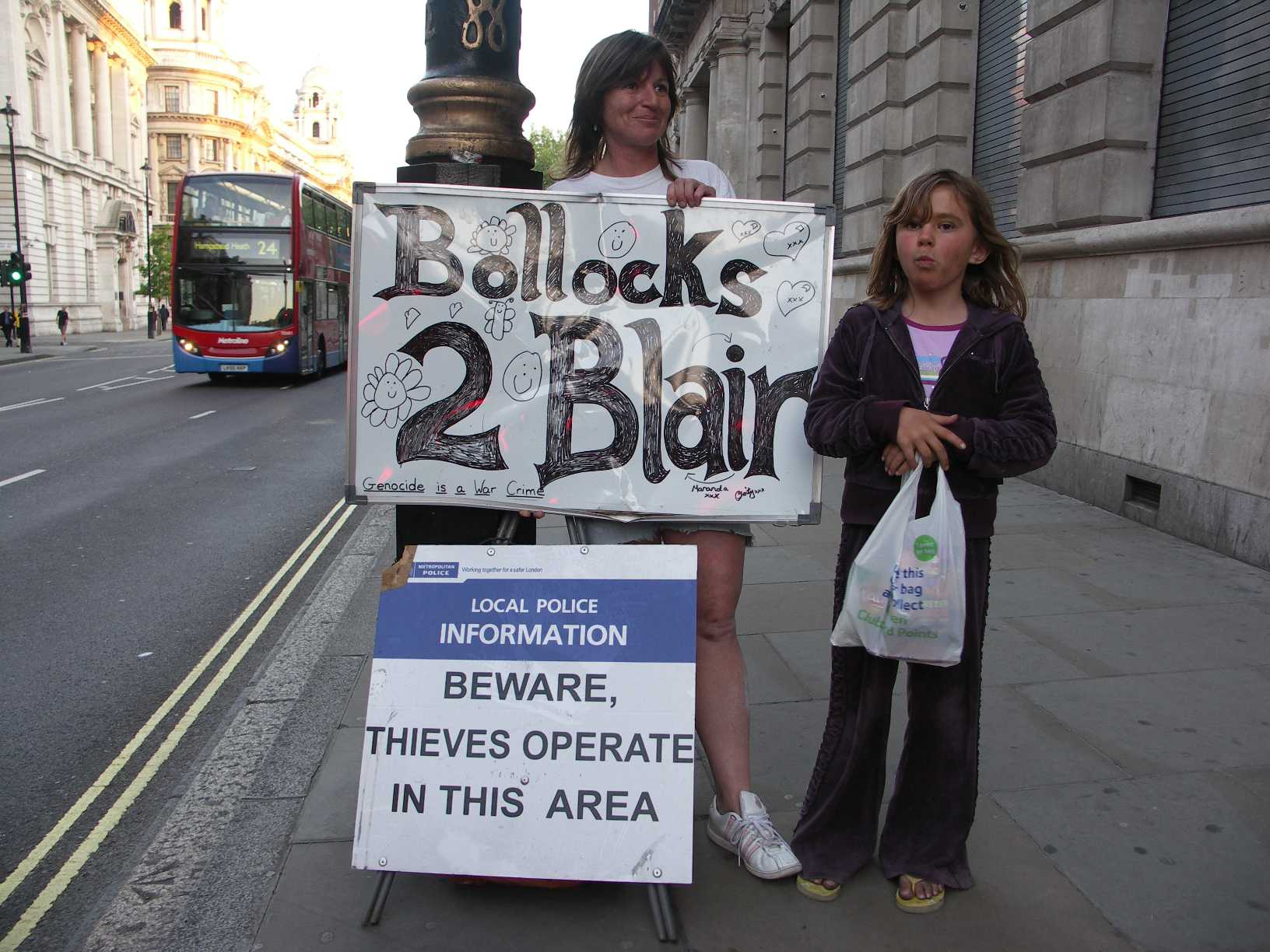 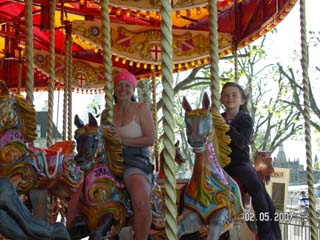 Life goes on... and I am gonna sue the ass off the Met and Tony Bliar!