An IndyOaxaca compañero who is indigenous to the mixe territory of Oaxaca and an avid community radio, video and print and independent media activist with Indymedia Oaxaca is coming to talk and show films in Liverpool on Thursday 17th May @ Friends Meeting House, School Lane from 7pm.

Read more about the Oaxaca Uprising pages on Indymedia UK 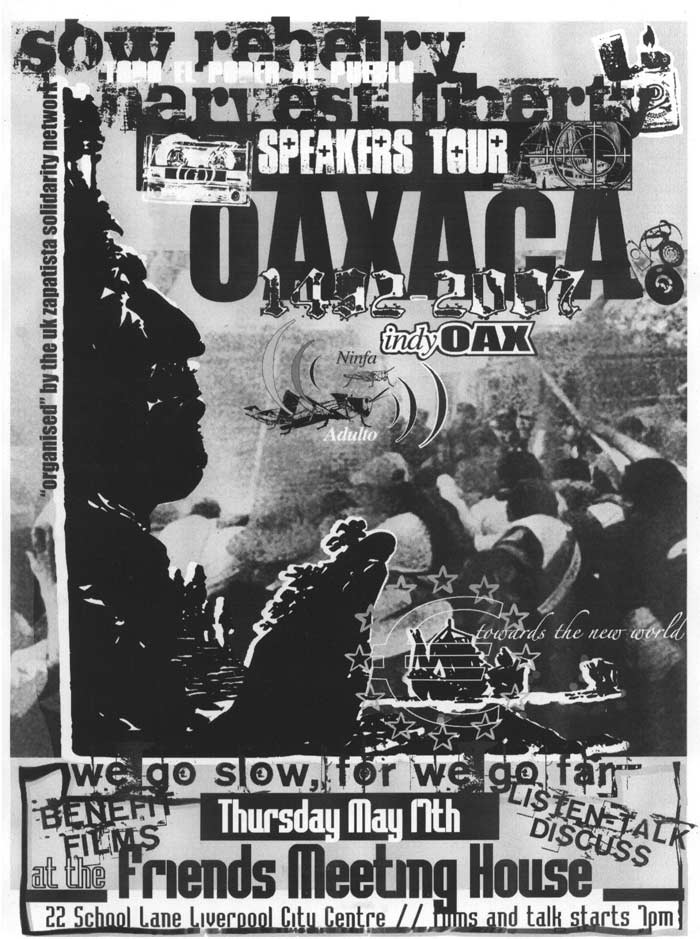 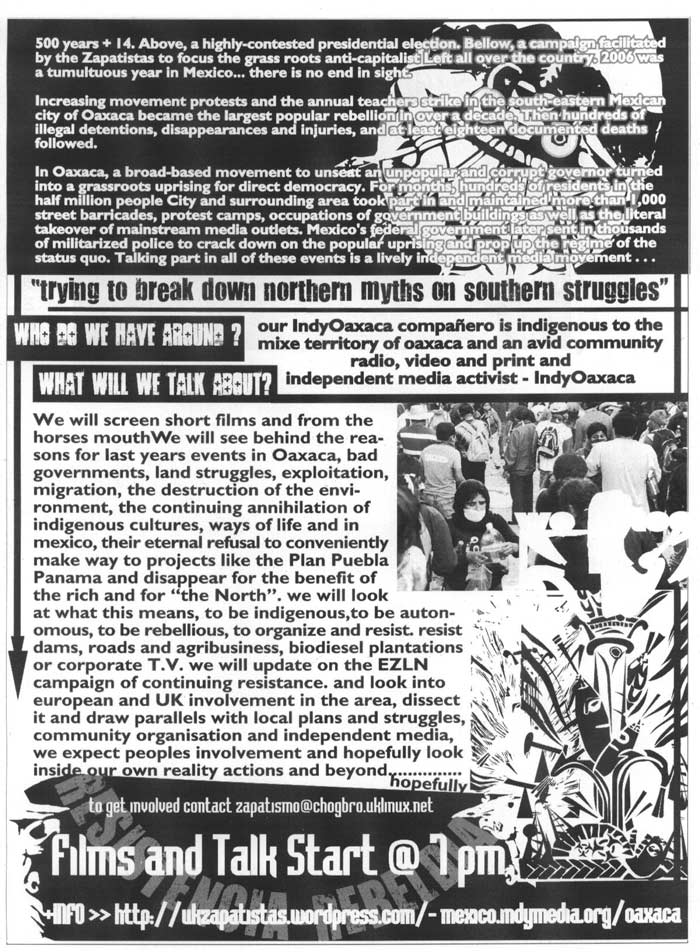 2006 was a tumultuous year in Mexico and there is still no end in sight. Above stands a highly contested presidential election and from below there is a Zapatista campaign to focus the grassroots, anti-capitalist Left all over the country.

The annual teachers strike in the south-eastern Mexican city of Oaxaca and the subsequent movement protests became the largest popular rebellion in over a decade. Then, hundreds of illegal detentions, disappearances and injuries, and at least eighteen documented deaths followed.

In Oaxaca, a broad-based movement to unseat an unpopular and corrupt governor turned into a grassroots uprising for direct democracy. For months, hundreds of residents in the half million people City and surrounding area took part in and maintained more than 1,000 street barricades, protest camps, occupations of government buildings as well as the literal takeover of mainstream media outlets. Mexico's federal government later sent in thousands of militarized police to crack down on the popular uprising and prop up the regime of the status quo. Taking part in all of these events is a lively independent media movement . . .

We will screen short films and hear straight from the horse's mouth the reasons behind last year's events in Oaxaca, bad governments, land struggles, exploitation, migration, the destruction of the environment, the continuing annihilation of indigenous cultures, ways of life and in mexico, their eternal refusal to conveniently make way to projects like the Plan Puebla Panama and disappear for the benefit of the rich and for “the North”. We will look at what this means, to be indigenous, to be autonomous, to be rebellious, to organize and resist. Resist dams, roads and agribusiness, biodiesel plantations or corporate T.V.

We will update on the Zapatista Army of National Liberation (EZLN) campaign of continuing resistance, and look into European and UK involvement in the area, dissect it and draw parallels with local plans and struggles, community organisation and independent media. We expect people's involvement and hopefully we'll get to look inside our own reality, actions and beyond...