Several main hubs of political projects associated with the forthcoming G8 protests have been raided by the police in Germany.
Amongst them a social centre in Hamburg, which will open in three weeks as the first convergence centre in Germany. 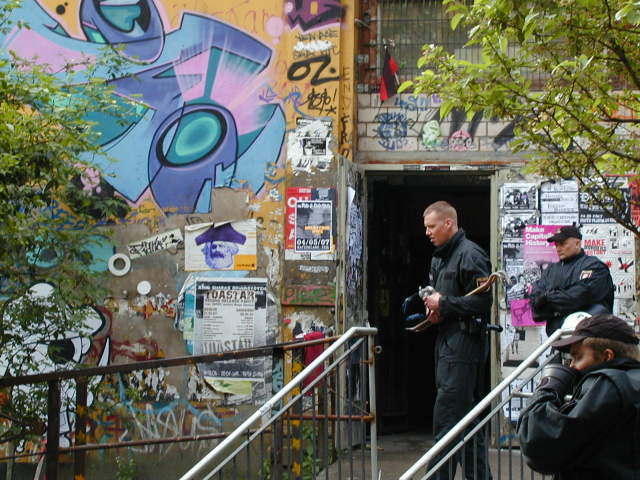 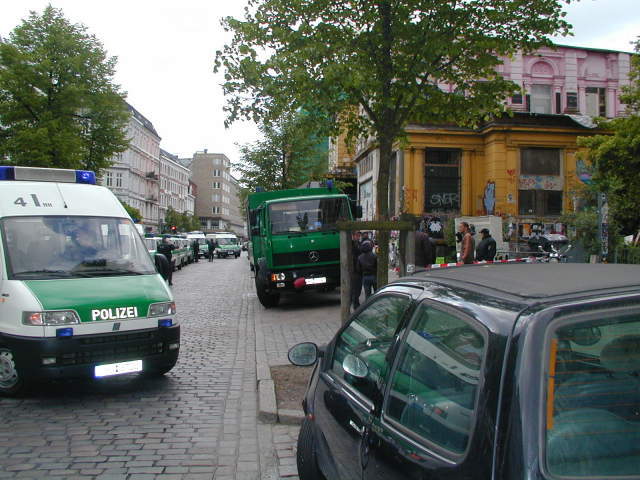 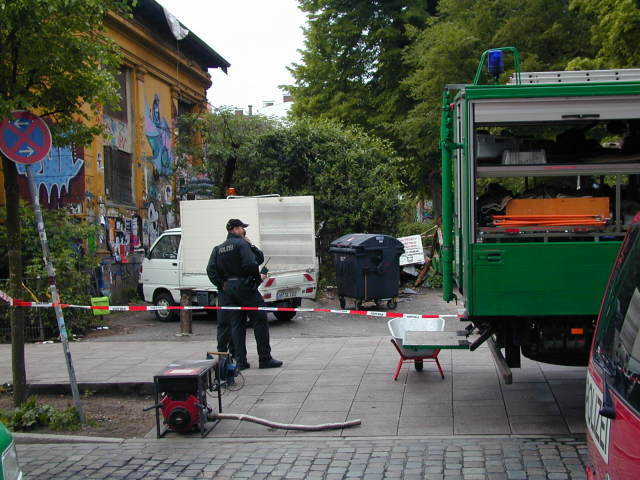 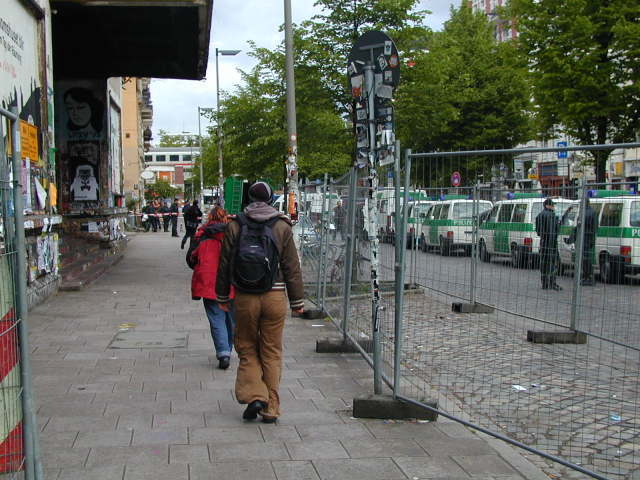 According to Indymedia Germany, the reason behind the state oppression is an exaggeration of a legal paragraph aimed to disrupt terrorist organisations.

The raid started at around 8am MEZ with 20 police vans blockading the roads and entrance of the social centre.

There have also been accusations made by authorities of a "militant campaign trying to prevent the G8 summit" or something like that.

Since this morning 8 o clock a german wide wave of raids against the leftist Strcutures takes place.
Affected are Projects and private Persons which are engaged against the G8 Summit - or to be held as such.

In Berling are at least 7 houses and office rooms affected, amongst them 2 offices in "Bethanien" as well the " Fusion" Shop in the Skalitzer Street. The place where the Antifashist left Berlin and the Network "interventionistische Linke" organize themselves.
As well afflicted is the Bookshop in "Mehringhof" and the offices of scores of alternative media Projects in the "Lausitzer" Street.

Particularly attention the BKA ( Federal criminal Police Office ) pays to the Server SO§&.net.
Many leftist and alternative Projects have their Web pages, mailinglists and mailadresses located there.
With that one tries to disturb the structure of communication of the Anti G8 Movement massivly.

In Hamburg the repressions affect the "Rote Flora" and diverse House Projects.
Also in the Berlin hinterland raids take place. As well raids are alert from Bremen.

The adudication of search is exposed for § 129a: " formation of a terrorist coalition to avert the G8"

The crass assortment of leftist House Projects and Infrastructure makes clear that the enquiries
are taken as false pretences to randomly act against the left mobilization.
" Pretences of enquiry might be diverse damages to propperty which have been comitted in relation to the G8",
assumes the campinski press group. In the same relation the Kampinski Hotel has been attacked with paintballs.

The latitude of a §129a operation are used to collect Datas and beyound by all means the effect of intimidation.
merely 2% of all cases according on §129a result in condemnation.

Neverthelss: " who invites the G8 Summit, invites also the Protests !", announced Mister Jobst of the "Bethanien" office in Berlin.
" All trials of crominalizatin won´t change the fact, that we will take the G8 as occasion to give a highlight to the injustice on the world."

The repression of the BKA ( Federal criminal Police Office ) doesn´t appear surprisingly.
The left and radical left Resistance against the G8 has taken dimensions the Police can´t handle anymore.
" Until now the Police has only tried to split the Resistance and create a phantom of the "army of chaots" via Media,"
explains Jobst.


" Noticable is that the raids are aginst all spectra of the resistance, which don´t adress any requirements to the G8,
but dismisses the G8 as Institution entirely." says a spokeswoman of the "Gipfelsoli" Info Group.

Since Wednesday morning 8 am a wave of searches is taking places against left structures throughout Germany. Targeted are social projects and private persons that are organizing against the coming G8 summit - or suspected to do so.

In Berlin at least seven flats and office spaces are being searched, amongst which two offices in Bethanien, a social centre in Kreuzberg, Berlin, and the Fusion shop in the same district. The latter is a space used by an antifascist organization and the Interventionist Left. Moreover, a bookshop in Mehringhof and the office spaces of several alternative media projects in Lausitzer Straße have been searched.

The criminal investigation police was putting special attention on the alternative Internet server so36.net. Many left and alternative projects have their websites, mailing lists and mail adresses hosted there. This way, the communication structue of the anti-G8 movement is hit on a sensibel point.

In Hamburg the repression is aimed against the social centre "Rote Flora" and diverse housing projects. Also in the surrounding of Berlin searches are taking place. And there are first reports about searches in the city of Bremen.

The orders for the searches are based on § 129a: "Formation of a terrorist association with the aim to stop the G8 summit". The random selection out of many left housing and infrastructural projects makes clear that the investigation is used as an excuse in order to weaken the mobilization against the G8. "Probably diverse cases of property damage serve as an excuse for these investigations", so the impression of the Campinski Press Group. One of these cases occured at the Kempinski Hotel, where the G8 summit is going to take place. The hotel was targeted with paint balls some months ago.

The context of a §129a investigation are instrumentalized in order to gather data about the protest movement. Besides, such measures have, most likely intended, intimdating effects. Only 2% of all $129a investigations result in sentencing.

However: "Who invites the G8 summit, also invites the protest against it", explains Hanne Jobst of the Berlin Bethanien office. "All attempts to criminalize this movement will not prevent us from exposing worldwide inequalities during the G8 summit."

The repressive acts of the criminal investigation police are not entirely surprising. The left and radical left resistance against the G8 has reached an uncontrollable level for the police. "So far, the police only tried to split the resistance in the public media through hallucinating about an army of 'anarchists'. Now they will try to sabotage the organizational structures", Jobst explains further.

"It is noteworthy that the searchces are targeted agaist all those parts of the resistance that refuse to direct claims to the G8, because they refuse the G8 in general as an illegitimate institution", explains a spokesperson of the Gipfelsoli Info Group.