About rythms of resistances participation on the mayday march in manchester 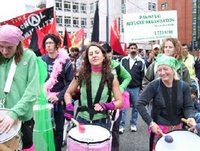 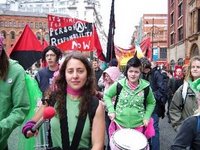 The reborn manchester mayday celebrations has continued for another successive year.

The march started outside All saints park, and ended with a rally in albert square. The march was organised the TUFR (Trades union for refugees) under the theme of international solidarity. The protest was aimed towards the governments scapegoating of refugees, their deportations to countries which are plagued by civil war, famine, or governed by totalitarian regimes. Rythms of resistance manchester joined the march in solidarity the struggle of the refugees, and the struggle of workers everywhere, and to celebrate working peoples contribution to society.