Christiania under attack and Copenhagen-Update

The police entered christiania yesterday to evict and demolish a house, that partly burned down a couple of years ago. The eviction lead to a night of street fighting in the area. Timeline is translated from modkraft.dk
Yesterday's attack on christiania has to be seen in connection with the attack on Ungdomshuset the 1st of march which lead to a week of riots all over Copenhagen. Again the police is now attacking a free space in Copenhagen that has been under attack from both police and government several times the last couple of years

The reason was officially that there had been made new constructions on the house which against the new administration "rules" for christiania that forbids any construction at all, which also lead to another major police raid in september 2006. Unofficially it is said that the eviction might be a test from the police to see the reaction to evictions on christiania, prior to the promised eviction of all "illegally" build houses in the area..

From several politicians and the opinion in general among left radicals the official reason for the attack has been critized as being pointless. The house was officially asked to be removed by Christiania themselves back in 2006 and there hasn't been any reason stated why it had to be removed just now a month and a half after Ungdomshuset and a week before the court decides whether or not 3 houses on Christiania should also be evicted.

To many it seems like the police is training for these evictions of houses that are still in function and also this might be an attempt to shift the public opinion AGAINST Christiania by creating and provoking several riots in the area week after week.

However, the riots and fighting yesterday also shows that the police isn't always the strongest force. People were caught by surprise this morning when they attacked Christiania but by evening the demonstrators proved to be a much more prepared and stronger force than the police seem to have been prepared for.

Even though Copenhagen might have seemed to disappear again in the international news the city has been the center for huge political mobilizations time after time and there has been more and more focus on police brutality in the danish news.
At the same time sentences has been decided by the city court against some of those people arrested around 1st of march. Most of them have been confession trials and might therefor not give any hint about future trials but in one or two trials people have been sentenced for long jail punishments even though there was more civil witnesses supporting them than police witnesses against them.

A police attack hasn't begun anyway. Four police vans are parked across Prinsessegade with a number of officers in gas masks in front of and behind the vans.

Further up the street closer to Christiania molotov cocktails and teargas granats are thrown in each others direction but without any real movement.

The police has all equipment ready but nothing is happening

The witness thinks it looks like the preparation for a final attack on the demonstrators.

There has just been new clashes between demonstrators and police around Prinsessegade and Bådmandsstræde.

The police moved forward in vans and had rocks thrown after them. The police then retreated and fired teargas at the demonstrators.

It seems as if the clashes doesn't lead to any changes in position. The police has again retreated.

The fighting between demonstrators and police seems to stop just as slowly. There aren't as many demonstrators on the street as earlier in the evening.

A witness has estimated the number of demonstrators to be around 100 but there is more inside christiania.

After demonstrators have been retreated to christiania they have now started running out in different locations in the area. There is fighting in a street next to Prinsessegade. The police is slowly retreating.

There are still huge amounts of gas in the streets but the wind keeps spreading it out.

There is still fighting between police and demonstrators in Prinsessegade. Also there is still a lot of gas in the streets but the demonstrators are just moving according to the amount of gas, retreating when there is too much. Molotovs are frequently being thrown at the police

The demonstrators are pouring water on the teargas bullets (?), moving from one to another with water bottles.

The area is covered with a huge policeforce.

The police has fired extremely much teargas in the streets. A witness says taht the demonstrators are crying and vomitting. But people still havent given up but are instead very aggressive. A lot is retreating from the gas but several demonstrators are staying.

Water and lemons are handed out among the demonstrators.

The wind in the area is continuing and the demonstrators are moing towards the police as soon as the gas is gone.

Teargas has just been fired into christiania over the musikplace Loppen (www.loppen.dk)

There are burning barricades several places in the area. In a parallel street to Prinsessegade a larger barricade is on fire

Everything is quiet on Sankt Hans Torv where a demonstration was suppose to start at midnight. 15-20 demonstrators are hanging out there and there isn't any sign of disturbance.

A clash is being prepared in Prinsessegade. The police has fired huge amounts of gas in the street but a wind is spreading it out. That makes the demonstrators move forward as soon as the worst amount of gas is gone

The police seems to be hesitating, according to a source

The police moved towards the demonstrators a moment ago. They were met with rocks and the like.

A minute after the attack the police retreated again and regrouped.
They fired gas at the demonstrators

The demonstrators have retreated a bit but are very disciplined. They are yelling "Hold the line" to each other. A witness calls them "ready for battle"

The situation is tense. Barricades are build in Prinsessegade

By Bådmandsstræde a smaller clash is happening. Opposite earlier the police is hesitating a bit. At other attacks the police has answered to demonstrators' attacks with powerful attack on them.

It is the demonstrators that are offensive now.. They are yelling out paroles against police brutality

The house the police evicted this morning has been rebuild.

There are two large burning barricades in Prinsessegade. One of them was attacked by a police 15 minutes ago.

A new fire is being made between the two barricades. The mood is tense & battle-prepared.

The area has been blocked by police. No one can enter or leave the neighbourhood. Even the metro has been stopped.

Witnesses describe the situation as silence before the storm

Police has just started a massive and violent attack on the entrance to Christiania. This is after demonstrators again has made attacks on the police. A single demonstrator didn't make it away and has been arrested and carried away

The police attacked the entrance to christiania five minutes ago. The demonstrators replied with molotovs, rocks and bottles.

The police has retreated again and a new attack is expected.

There are several burning barricades in the area

The riots started shortly after 22 o'clock where a demonstration on the main square in the area started by sms's started a larger fire and build barricades. The police attacked the demonstration after about 10 minutes and at least 25 people were arrested.

The demonstrators spread out in the area afterwards and started building burning barricades around the entrances to christiania.

Politiken.dk writes that at least 42 persons had been arrested at 22.30 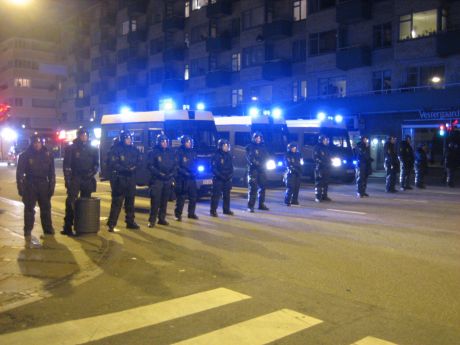 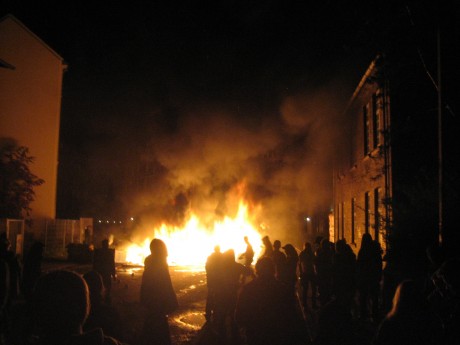 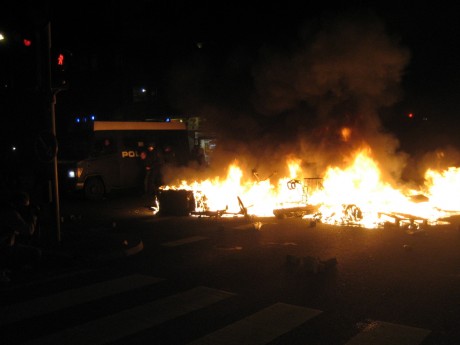 this caused the police attack : 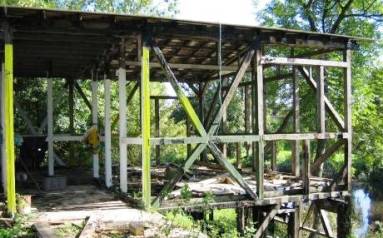 2 homeless people built a wooden roof on the ground where a building burnt down years ago [pic] - enough action to cause a brutal police raid.