Kebele social centre and Kiptik are hosting an info night and update on the situation in Oaxaca, Mexico as part of a speaking tour organised by the UK Zapatista solidarity network. With Bristol’s population roughly similar to that of the city of Oaxaca, we look forwards to being inspired by what others have achieved! 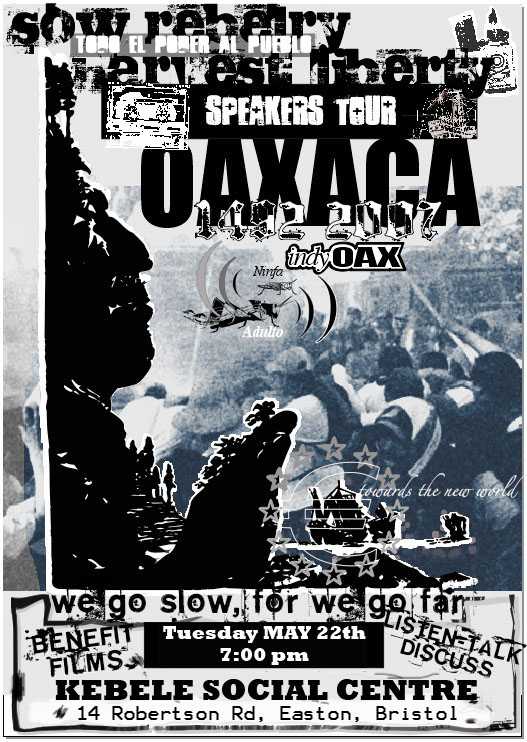 An indigenous indymedia activist who was involved in the resistance will give a presentation and show short films about the rebellion and struggle for autonomy in Oaxaca and Mexico as a whole. There will also be time for discussion and Mexican food!

Last year a popular uprising exploded on the streets of Oaxaca in Mexico. Sparked off by brutal state repression of a teacher's strike and widespread hatred of the corrupt system presided over by a dictatorial local governor, grassroots and widespread direct action took control of the city.

Thousands of people took part, occupying government buildings, setting up assemblies, producing their own media, reclaiming their city and defending the liberated space from police and military attack for several months. Barricaded streets opened the way for the movement from below. Despite the disappearances, torture, injuries and police murders,
the people are not defeated and this crack in the system has given many a glimpse into a different world. The struggle continues! La lucha sigue!