Crime of the Century - Article 2

In the aftermath of our first article ( found here: 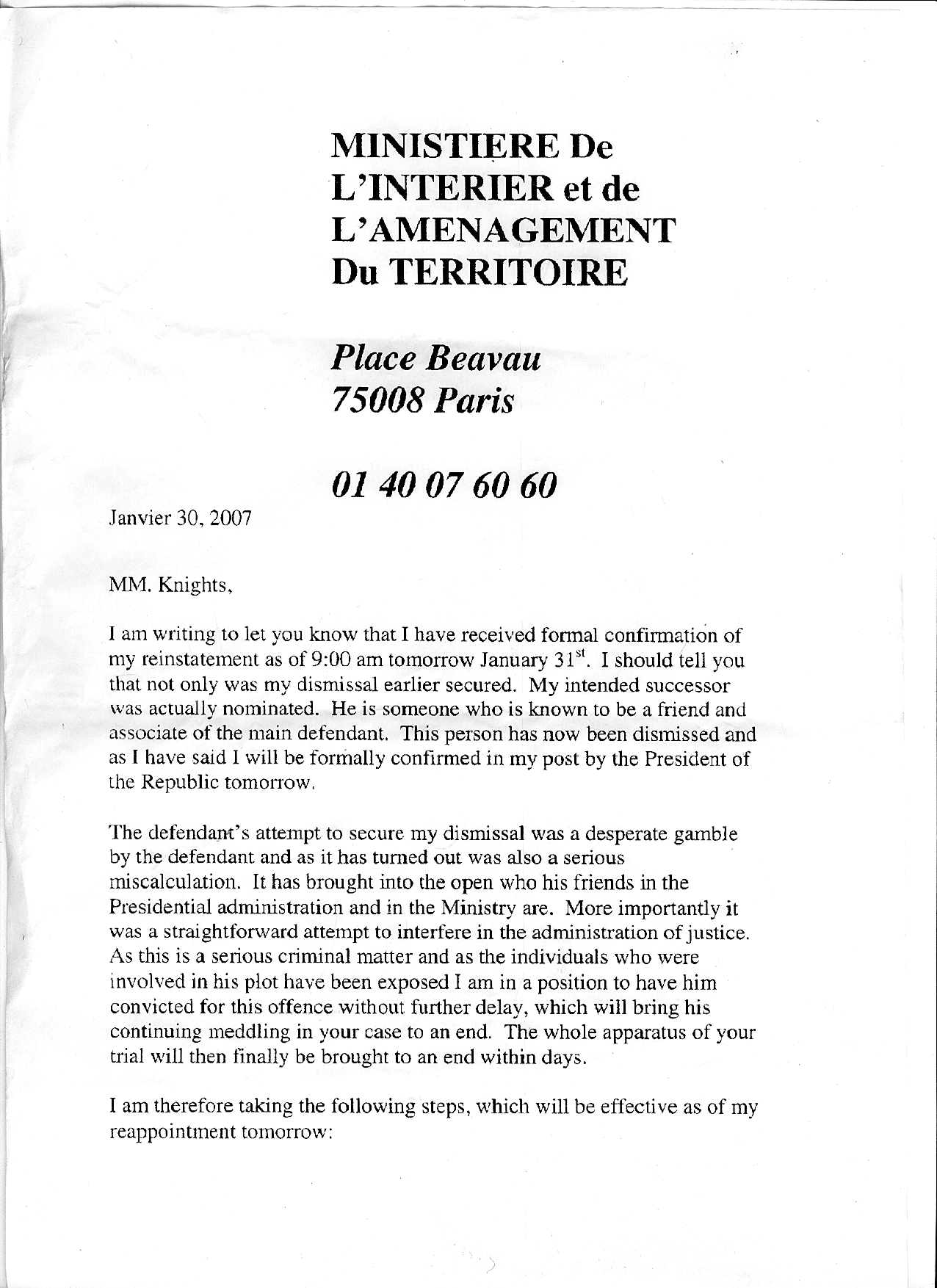 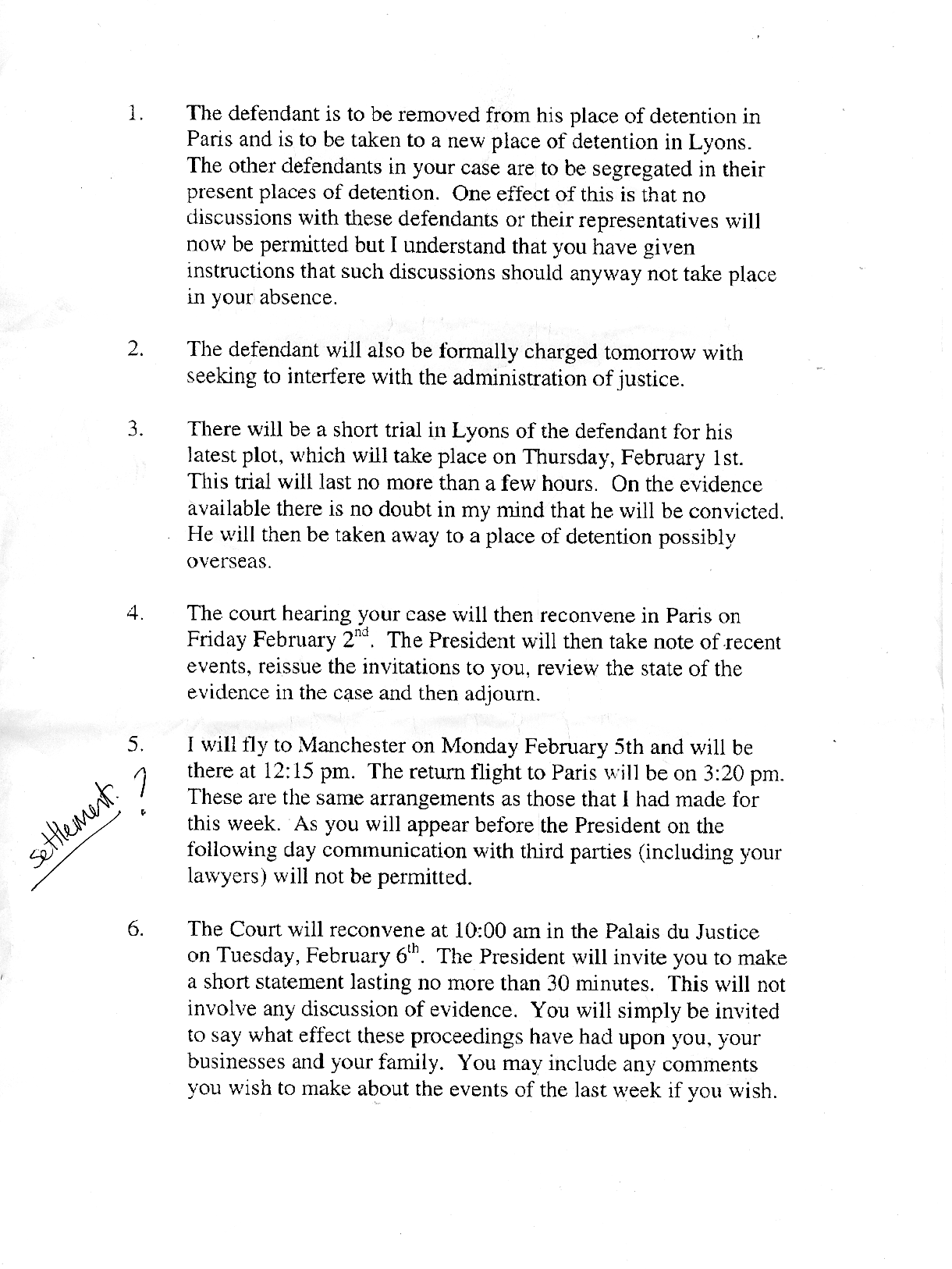 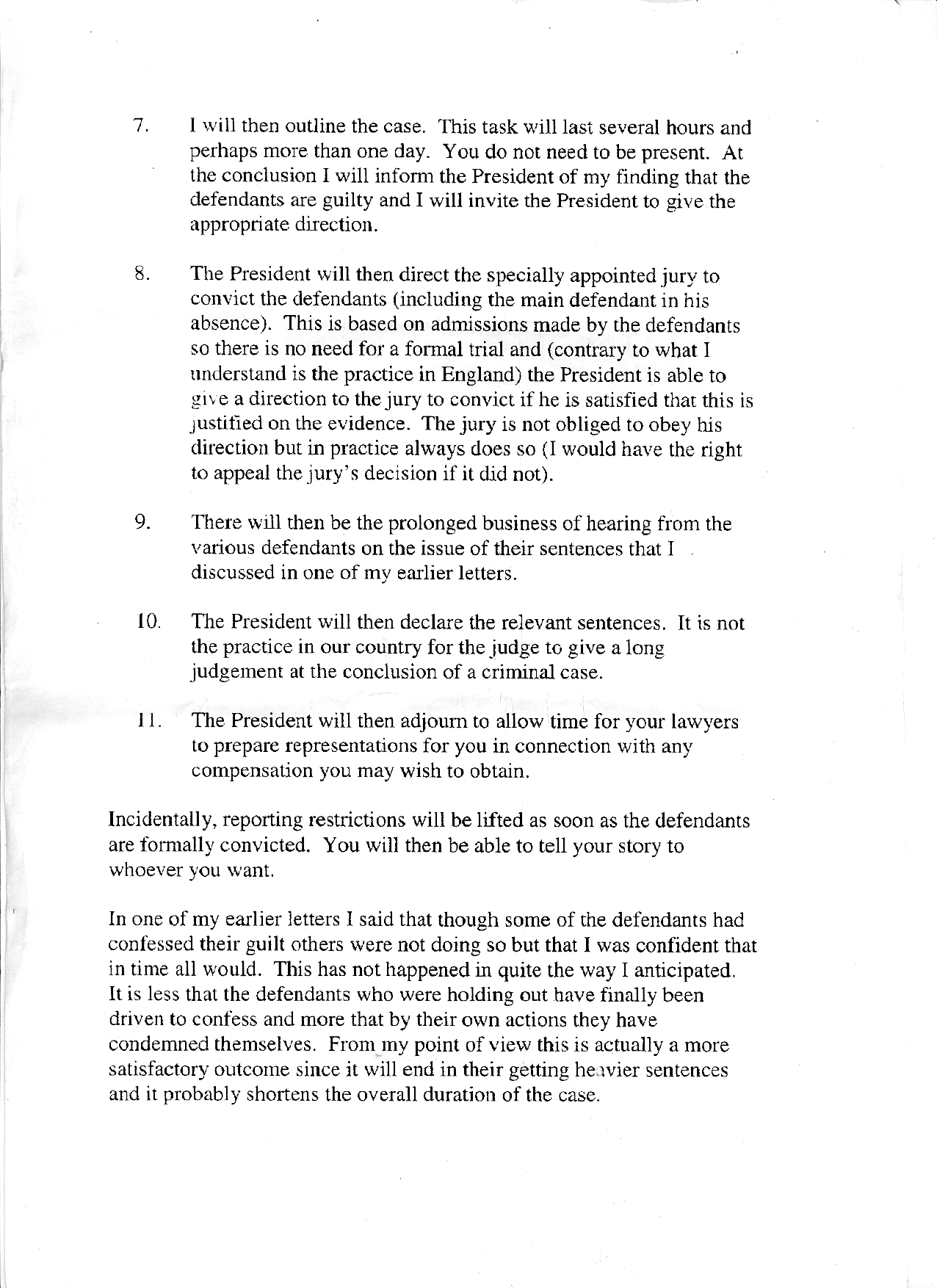 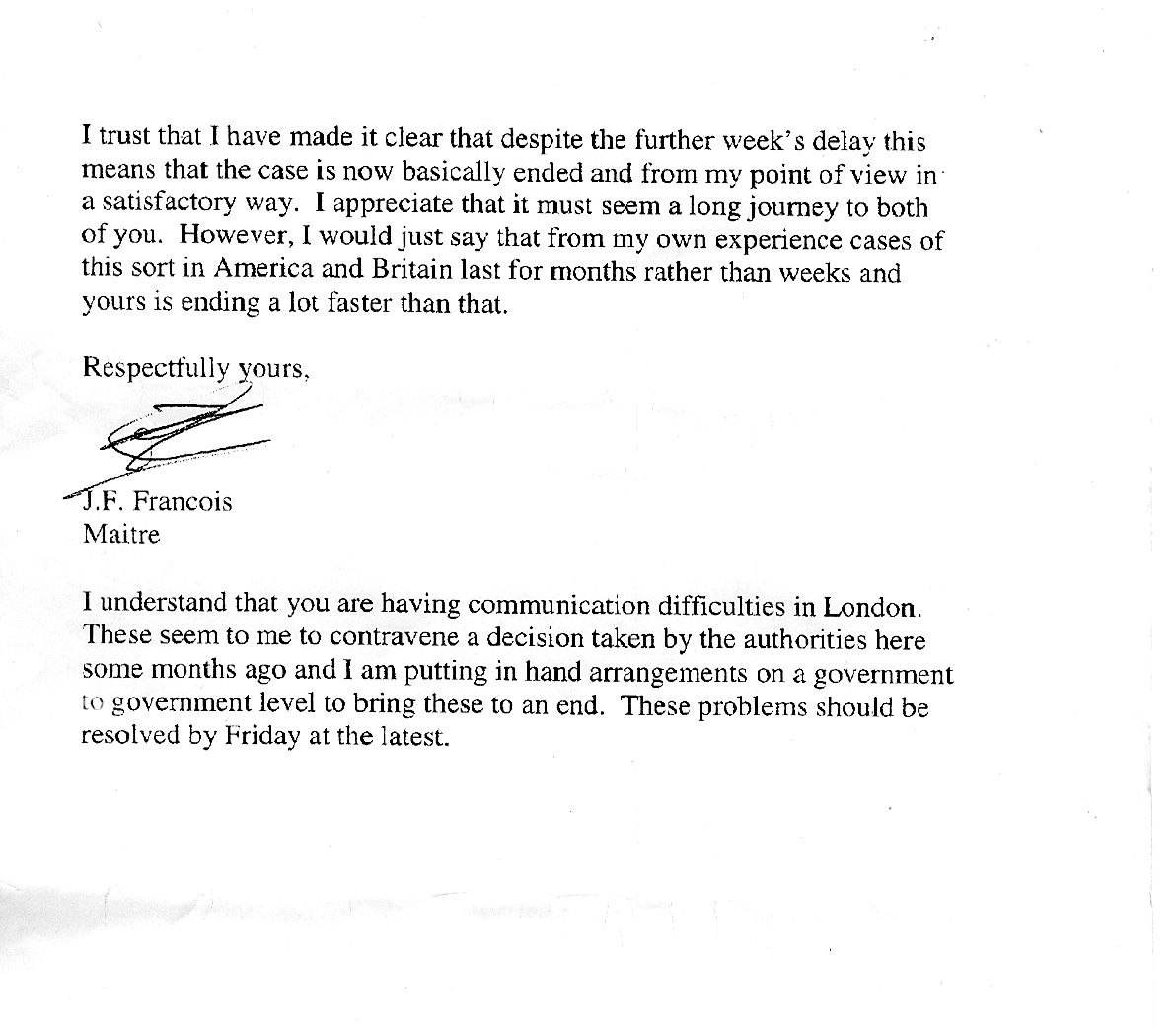 Crime of the Century - Article 2

http://www.indymedia.org.uk/en/2007/05/370641.html?c=on#c173814
2.We are Allan And Julie Knight, we have been in a legal battle since 1999 to date – we are litigants in person. This case is about non-payment of our work invoices for vodaphone plc. This was a simple commercial case.
3.The information in Article 2 is further proof of the perversion of justice that Nicholas Sarkozy carried out in our case according to Lord Justice Clarkes evidence in the criminal trial in Brussels wherein Sarkozy was a co-defendent.
4.This is an attempt to 'break free' from the injustice we suffer and make the courts honour their judgement, which are totally in our favour and have been for eight years!
5.Please help us publicise these facts worldwide – copy them to your website, email them to your friends, etc, as Nicholas Sarkozy is trying to block publication.

6.Towards the end of the trial, Nicholas Sarkozy and Lord Faulkner (British Labour Lord) used the same defence of “immunity from prosecution” (due to their status). The court ruled against this defence for both of them.
7.After the courts ruling Nicholas Sarkozy called our barrister to say he had 'no interest in ourselves or our barrister' (note: 8 days later he attacked both ourselves and our barrister in the 'scam' referred to in the first press release on 14th May 2007 {points 17 through to 26})
8.Our barrister requested confirmation of the telephone conversation by letter and it was to be included in the courts final judgement.
9.Nicholas Sarkozy provided a witness statement/affidavit (this was his new defence) to the court stating that Tony Blair and Lord Levy were the persons who had entrapped him into this court case with promises of trade between Britain and France once he had become President of France.
10.What Nicholas Sarkozy did not do was:
a) Provide the promised letter
b) He did not defend himself against the evidence Lord Justice Clarke gave against him at the criminal trial in Brussels (this evidence is detailed to in our first press release)

11.On the 16th May 2007 Nicholas Sarkozy made a ranting phone call to our barrister in response to the press release where he made serious, and slanderous, allegations against us
12.He sent 17 of his solicitors to the Brussels court to delay publication of the courts sealed judgement. (This was promised to us by the court again on the 16th May – this is a repeat pattern of promised release and subsequent failure. We now await a new date for official court release but are unrestricted in our ability to disclose or publish)
13.The court pointed out that this was a breach of Article 10 of the Human Rights Act: Freedom of Speech.
14.There is, and has been, still no defence lodged against Lord Justice Clarkes evidence about Nicholas Sarkozy and the other co-accused (This is now not possible as the judgement has already taken place and been sealed).

15.Evidence in support of Lord Justice Clarkes testimony regarding blackmail of Jacques Verjais and the corruptive influence of Nicholas Sarkozy has had in our court case since 2005 is attached. This is a letter from the criminal trial prosecuting judge J.F. Francois to ourselves dated 30th January 2007 (four pages).

The Attached Letter from the Criminal Trial Prosecuting Judge

16.The below notes are the 'key' (in the same way a map has a key) to understanding who the individuals referred to are in the attached letter, and what is being referred to.

a) Page 1 Paragraph 1: The “main defendant” refereed to is Jacques Verjais
b) Page 1 and 2 (up to Numbered Item 3 of Page 2): This is the blackmail plot Verjais was lured into by Nicholas Sarkozy as outlined by Lord Justice Clarke.
c) Page 2 Item 4 onwards : This refers to the process of bringing the criminal trial to a close. This never took place due to the perversion of justice/interference by Nicholas Sarkozy.
d) Page 3 Numbered Item 7: Some of the other defendants mentioned are
Vodaphone Plc
Arun Sarin (Chief Exec.)
Sir Christopher Gent (Ex Chief Exec.)
Their barristers from 1 Essex Court, London
Bernard Eder
Their solicitors
Peter Southeran – Beechcroft & Wainsborough
Michael Clavel-Bates - Eversheds
Andrew Barfoot – Eversheds
Vodaphone Agent
F. Fazlynia
There are a further 23 defendants from each of the above categories as well as The House of Commons, The Bank of England & The French Government. All defendants are held in the holding cells contained in the criminal court in Paris.

21.Nicholas Sarkozy keeps our legal team tied up and busy with delaying tactics we are left to deal with the new President of France ourselves. If we look at this a moment, it is ludicrous. We have on one side the new President of France, residing in the Elysee Palace and with the resources of one of the most powerful nations on Earth at his disposal, and we are in Housing Association property living on state benefits while the courts vacillate over the publicising of these damning facts and the release of our legally awarded funds.
22.We ask the President of France to make a public apology to us which should be subsequently confirmed in writing about:
a) The slanderous comments in yesterdays phone call
b) His threat to use his secret police against us
c) Retract the statement that 'we would never be paid ' (the monies awarded us by the court) (b and c were referred to in our first press release item 16)

Get out of our legal case, and get our of our lives You Bully!

One Race, One Nation, One Love, One Truth