Tomorrow - 18th May – at the Bloomsbury armed forces recruitment centre, people will be going armed with fliers to give a counter view of what life is like in the army. The Bloomsbury recruitment centre is located in the same building as the Defence Export Services Organisation (DESO), the government's arms sales agency.

With the wars in Iraq and Afghanistan raging the chances of being killed and injured have increased dramatically over the past few years. But even if ex-services personnel make it back alive many are still scared for life from their experiences.

We encourage everyone to help us hand out fliers and let people know what it's really like in the military! 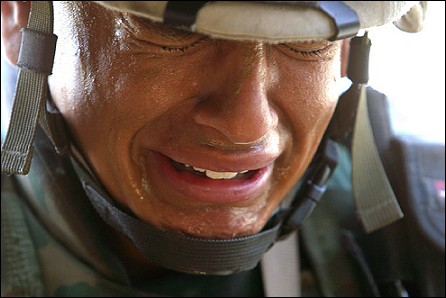 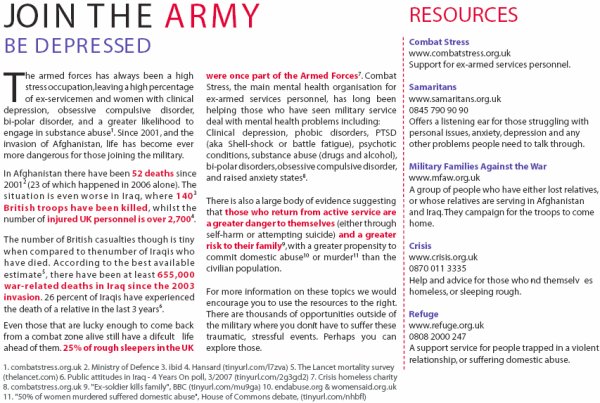 Below is the text of the fliers we'll be giving out:
---------------------------------
The armed forces has always been a high stress occupation, leaving a high percentage of ex-servicemen and women with clinical depression, obsessive compulsive disorder, bi-polar disorder, and a greater likelihood to engage in substance abuse(1). Since 2001, and the invasion of Afghanistan, life has become ever more dangerous for those joining the military.

The number of British casualties though is tiny when compared to thenumber of Iraqis who have died. According to the best available estimate(5), there have been at least 655,000 war-related deaths in Iraq since the 2003 invasion. 26 percent of Iraqis have experienced the death of a relative in the last 3 years(6).

Even those that are lucky enough to come back from a combat zone alive still have a difficult life ahead of them. 25% of rough sleepers in the UK were once part of the Armed Forces(7). Combat Stress, the main mental health organisation for ex-armed services personnel, has long been helping those who have seen military service deal with mental health problems including:
Clinical depression, phobic disorders, PTSD (aka Shell-shock or battle fatigue), psychotic conditions, substance abuse (drugs and alcohol), bi-polar disorders, obsessive compulsive disorder, and raised anxiety states(8).

There is also a large body of evidence suggesting that those who return from active service are a greater danger to themselves (either through self-harm or attempting suicide) and a greater risk to their family(9), with a greater propensity to commit domestic abuse(10) or murder(11) than the civilian population.

For more information on these topics we would encourage you to use the resources to the right. There are thousands of opportunities outside of the military where you don’t have to suffer these traumatic, stressful events. Perhaps you can explore those.