5th citizen inspection of the NATO Response Force base in Valencia

In the 5th Citizens Inspection, on the 12th May, at 11.30a.m. a team of 7
citizen inspectors entered the main facilities of the NATO Response Force base
despite security vigilance measures, demand its closure and conversion into a
social and ecologically friendly space, as part of a week of actions against
military installations. 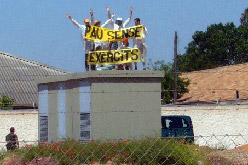 7 antimilitarists managed to enter the main facilities of the NATO base in
Betera (Valencia) to demand its closure.

In the 5th Citizens Inspection, on the 12th May, at 11.30a.m. a team of 7
citizen inspectors entered the main facilities of the NATO Response Force base
despite security vigilance measures, demand its closure and conversion into a
social and ecologically friendly space, as part of a week of actions against
military installations.


--- From a point 300 metres distant from the main
entrance to the base, pacifists entered the perimeter fence and after advancing
20 metres, climbed up onto the roof of a small construction from where they
could see the installations. A few minutes later the inspectors found
themselves surrounded by military and police agents in large numbers. The
protest march which had left Betera 40 minutes before, arrived on the scene
where they remained throughout. The inspectors unfurled a banner with the
slogan “Peace without Armies”.

80 people joined the annual inspection in the main street of Betera.
Dressed in white coats and carrying placards in different languages
against wars, armed forces, security fences and borders, they made a
lively procession through the streets of Betera. They were accompanied by
musicians playing traditional music. On various occasions, when a siren
sounded, the demonstrators threw themselves on the ground (including in
front of the main gate of the base). They attached placards to the fence
which read: “DANGER. HIGH LEVELS OF VIOLENCE”

After 20 minutes wait, 3 policemen arrived at the roof where the
inspectors were, to ask for identification and insist that they leave the
enclosure immediately. The policemen accepted the demand of the inspectors
to remain there a little longer to make the protest more visible. They
started to climb down the ladder but disagreements between the different
armed forces led to some confusion as it seemed there was lack of
agreement about what to do with the group. They were no detentions made
and, to the surprise of the inspectors, their task of inspection was
helped as they were let out through a vehicle exit at the other end of
the base, giving them to get a good view of the installations.

According to the inspectors “Once more, the police response to a civil
initiative makes us think that the NATO’s Response base in Betera is
hiding a lot from the public”. “no even a palm’s breadth of land for war:
wars kilometres and kilometres from where we live really begin near our
homes in bases with interventionist and aggressive objectives”

“Valencia, WRAPPED UP in war”

This action tries to go beyond the denouncing of the terrible consequences
of war to highlight the politics, institutions and installations
responsible for preparation and perpetration of war. We have concentrated
on the Betera base over the years, as it is on our doorstep, and is a base
capable of directing a military action against “international terrorism”
with 20,000 soldiers anywhere in the world. (the excuse used for bombing
and invading Iraq and Afghanistan). That means we all are involved and in
so much, are targets for potential attacks.

The tsunami of cement which floods Valencia is accompanied by a more
silent one, that of military colour. In Quart, (Valencia), they will
shortly be opening a base where they will co-ordinate military actions of
the UN “Peace-Keeping” Force. They have nothing to do with peace, they
occupy Lebanon rather than territory held by Israel, the aggressor; they
are implicated in at least two massacres of civilians in Haiti, a fact
recognised by the UN, and accusations of violations of minors and
trafficking of women is on the increase. In Rabasa, (Alicante), there is a
base of special operations and in Marines, an armoured vehicle base.

This action forms part of an campaign to demand the closure and conversion
of all military installations. RECLAIM THE MILITARY SPACES. We call for people
to carry out non-violent actions at military bases, recruitment agencies,
arms manufacturers and financial entities who invest in the arms industry.
We want to see the abolition of the armed forces and an end to wars.

In Spain, a campaign is running against the possible installation of the
NATO Ground Surveillance System (AGS) in Zaragoza or Valladolid, and the
NATO School of Combat Pilots in Albacete (Tactic Leadership Program). On
6 May, a march took place on the US base in Rota (Cadiz), and today a
group of anti-militarists entered the manoeuvres camp in San Gregorio
(Zaragoza) and painted a tank pink. 20 May there will be a march for the
demilitarization of the Sierra de Aitana (Alicante), where there is a
military radar air vigilance base on the peak of the mountains.

Actions against Nato Responce Force in Sweden too 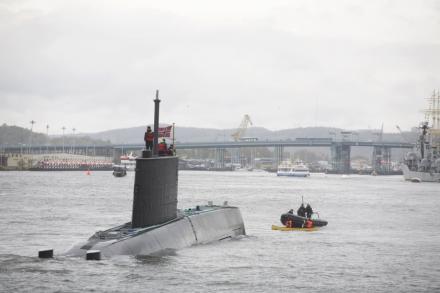 Hi!
Great actions! We resisted the NATO responce Force in sweden last week, when they had an exercise here - two people were on board a french ship, and four people broke the security with small boats and canoes. See pictures here:

http://ofog.org/image/tid/34 and a small film here: