According to this report, Iraq recorded a staggering 150 percent increase in the rate of infant deaths between 1990 and 2005. In raw figures, 122,000 Iraqi children died in 2005, half of them newborn babies. The rate was 125 deaths of children under five for every 1,000 live births, compared to 50 in 1990. According to the Iraqi health ministry, conditions have only worsened since, with the ratio climbing to 130 deaths for every 1,000 births in 2006. 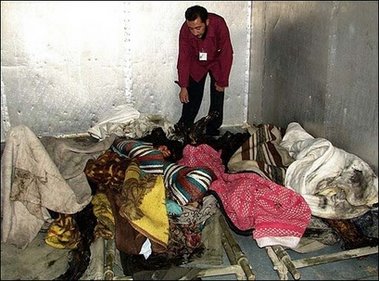 This is the first part of a three-part series. The second part will be posted May 21.

While official politics and the media in the United States are focused largely on competing plans for salvaging the American occupation from the debacle it confronts in Iraq, little serious consideration is given to the historic catastrophe that has been inflicted upon Iraqi society itself.

Although no definitive figures can be given on the total number of Iraqis who have died as a result of the US war and occupation—including those killed in the invasion and subsequent armed violence and those whose lives have been cut short by disease and hunger, particularly among the young and old—every serious estimate places the excess death toll between several hundred thousands and one million human beings.

Iraq, once among the most advanced countries of the region, has been reduced, in terms of basic economic and social indices, to the level of the poorest countries of sub-Saharan Africa.

What is involved is the systematic destruction of an entire society through the unleashing of violence and criminality on a scale not seen since Hitler’s armies ravaged Europe in the Second World War.

American society itself is suffering deadly consequences from this war. The number of US soldiers killed in Iraq has topped 3,400, with every indication that the casualty rate is climbing as the Bush administration’s “surge” sends combat troops into the densely populated and overwhelmingly hostile neighborhoods of Baghdad.

Another 30,000 American military personnel have been wounded or injured, many of them grievously. Undoubtedly, hundreds of thousands more will suffer the psychological effects of having participated in a dirty colonial war.

The war’s daily drain on the US economy is estimated at over $300 million, with predictions that its total cost could top $2 trillion.

There is an even greater cost, however, in terms of the damage done by this criminal war to the political, social and, indeed, moral health of American society. The Iraq war—all of the tired propaganda about the “war on terrorism,” the struggle for “democracy” and the “liberation” of the Iraqi people notwithstanding—is a failed attempt by America’s financial elite to further enrich itself and secure its continued global hegemony through the naked theft of Iraq’s oil wealth.

Every section of the US political and corporate establishment, all branches and levels of government, both major political parties, and the mass media are all implicated in massive war crimes. Criminality on such a grand scale cannot go unpunished without grave implications for the future of the American people and, indeed, all of humanity.

Taken together, US operations in Iraq have amounted to sociocide—the deliberate and systematic murder of an entire society.

A series of recent reports have pointed to the scale of death, destruction and oppression that have been wrought by the US occupation, now in its fifth year.

An occupation army engaged in slaughter and abuse

First, as a telling indicator of the violence that the US occupation has unleashed against the Iraqi people, there is the report released by the Pentagon earlier this month on the mental state of American occupation troops. The document presents a chilling portrait of an army suffering from growing demoralization and mental and emotional dysfunction, which find expression, in part, in callous indifference, if not outright hatred, towards Iraq’s civilian population.

The survey found that a majority of troops believed that Iraqi civilians have no right to be treated “with dignity and respect,” and that approximately 10 percent of them admitted to having inflicted gratuitous violence on Iraqis in the form of beatings or destruction of personal property.

Perhaps the most significant finding was that 14 percent of US soldiers and Marines said they were directly responsible for the death of an “enemy combatant.” Given that some 170,000 US troops are currently in Iraq—and over 650,000 have been deployed there at one time or another since 2003—this would indicate a massive death toll inflicted directly by US forces.

Many of these troops, of course, are in Iraq for second and third tours of duty, and the data does not account for incidents in which more than one person is killed, much less air strikes or artillery bombardments that can claim scores of victims. Nor does it include those killed by the tens of thousands of armed mercenary contractors, who are answerable neither to Iraqi law nor the military code of justice.

A further indication of the universal character of the deadly violence that has been inflicted upon the country came in the poll conducted earlier this year by ABC News, USA Today, the BBC and ARD German television, which found that fully 53 percent of Iraqis reported having a close friend or immediate relative either killed or wounded.

Along with the rising death toll has come a marked increase in the number of disappeared, which has far outstripped the horrors that this word came to symbolize in the worst years of dictatorship in countries like Argentina and Chile. Iraqi human rights organizations estimate that 15,000 or more Iraqis are missing, with between 40 and 60 more people joining the ranks of the disappeared daily—in other words, as many as 20,000 people on an annual basis.

Many, no doubt, have been exterminated by death squads, while others have joined the country’s burgeoning population of detainees, who are imprisoned without charges and subject to unlimited periods of pre-trial detention and often torture.

The Iraqi Ministry of Human Rights reported in March that the regime was holding nearly 38,000 detainees and prisoners, while the US military admits to 19,000 detainees jailed in its two main detention camps—Camp Cropper and Camp Bucca. This total amounts to nearly six times the number of prisoners held by the Saddam Hussein regime before the US invasion to “liberate” the Iraqi people. No doubt, it will rise substantially as the US military’s “surge” continues to sweep up large numbers of Iraqi civilians.

The displacement and exile of millions of Iraqis

In addition to the hundreds of thousands of deaths that the occupation has inflicted upon the Iraqi population, an equally telling indicator of its catastrophic implications for Iraqi society is the massive population of refugees and internally displaced persons.

In sum, fully 15 percent of the country’s population has been driven from their homes. The United Nations Commissioner for Refugees (UNHCR) estimates that between 40,000 and 50,000 more Iraqis are being displaced every week, many of them forced to sleep in tents or out in the open with no means of support.

“We left Baghdad because the situation is very difficult. We were threatened with death and they took our houses and also our shops,” a man who recently came with his family to Syria told UNHCR. “You see what the situation is there—just destruction and death.”

The United States, which unleashed this destruction and death, has since 2003 admitted only 701 Iraqi refugees. Syria is currently hosting some 1.2 million. Washington has sought to obscure this massive refugee crisis—let alone take any responsibility for it—because it is such a damning indictment of the social catastrophe it has created in Iraq.

The vast flow of internal refugees has created increasingly desperate and volatile conditions in the country’s south, where an estimated 700,000 have fled, joining some 200,000 locally displaced people within Najaf, Kerbala and Basra provinces. Local governments and relief agencies are overwhelmed, unable to provide this vast population with housing, food or medical care. The central government in Baghdad has proven unable and unwilling to provide basic support.

“There are dozens of families arriving every day at camps for the displaced, causing a lack of essential needs such as food and health care,” Ali Fakhouri, a spokesman for the Najaf provincial council told IRIN, the news agency of the United Nations Office for the Coordination of Humanitarian Affairs, in March. “The past two months were the worst for those families. For security reasons, the delivery of aid has decreased considerably and because of a lack of medicines in the region’s hospitals and inaccessibility to hospitals, children are more vulnerable to diseases. Diarrhea is common among children in the displaced groups in the south.”

Perhaps most startling of the recent reports is that issued by the children’s advocacy group Save the Children documenting worldwide trends in infant mortality rates, universally accepted as one of the most fundamental indices of social progress.

According to this report, Iraq recorded a staggering 150 percent increase in the rate of infant deaths between 1990 and 2005. In raw figures, 122,000 Iraqi children died in 2005, half of them newborn babies. The rate was 125 deaths of children under five for every 1,000 live births, compared to 50 in 1990. According to the Iraqi health ministry, conditions have only worsened since, with the ratio climbing to 130 deaths for every 1,000 births in 2006.

The years selected by Save the Children in conducting its international survey had particular relevance for Iraq, beginning in 1990 with the initiation of the punishing US-backed economic sanctions and ending in 2005, two years after the invasion. As with most of the essential indices of social devastation in Iraq, the infant mortality figures reflect both the country’s relentless economic strangulation—punctuated by periodic military attacks—over the course of more than a decade, and the violent destruction of the invasion and occupation which followed.

The vast rise in infant mortality in Iraq is unprecedented. Even sub-Saharan African countries that have suffered the worst ravages of AIDS have not approached such a terrible retrogression.

No doubt a significant share of these infant deaths can be attributed to US military operations. Virtually every air strike and bombardment carried out against populated areas claims children among their victims.

Far more important, however, is the overall disintegration of Iraq’s water, electricity and sewage systems, as well as its healthcare network, which together have created conditions in which the principal killers of children—diarrhea, malnutrition and preventable diseases like typhoid and hepatitis—go unchecked and untreated.

The United Nations has reported a stunning 70 percent increase in diarrhea among Iraqi children just since January 2006, with the highest rates in Anbar province, a center of resistance to the occupation that has been continuously under siege by US forces. Fully 60 percent of the people in the province have access only to polluted river water for drinking.

Less than a third of the population nationwide has access to clean drinking water, and just 19 percent have a functioning sewage system. Both the water and sewage systems were damaged heavily by US bombardments in the 1991 Persian Gulf War and the 2003 invasion. After toppling the Iraqi government, US forces did nothing to stop looters from stripping water treatment and pumping stations of essential equipment. “Reconstruction” here, as elsewhere, has proven catastrophically inadequate.

On average, Iraqis receive only eight hours of electricity a day, with even worse conditions in Baghdad, where most of the capital’s seven million people get only six hours or less of service daily.

http://wsws.org/articles/2007/apr2007/ibc-a06.shtml
The human costs of four years of war
The US invasion has caused nearly three-quarter million Iraqi deaths
[20 March 2007]