National Day of Action for Asylum Seekers in Nottingham

No Borders Nottingham held up its end of a National Day of Action for Refugees with a stall in the Market Square accompanied by the No Borders banner, today sharing the Square with the Farmers’ Market and a City Council awareness day for Fostering of children. 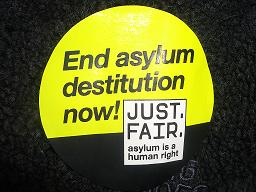 For No Borders, it was a good opportunity to have conversations with passersby about the dire situation facing asylum seekers living in Nottingham and Notts, many who have been made destitute because of Home Office decisions to withdraw housing and money for food, or that their countries are safe to return to in spite of their experiences of torture and severe repression, or other fears of returning such as deaths of members of their family and friends. Leaflets were handed out answering questions people might have about asylum seekrs, and showing what groups like No Borders, Nottingham & Notts Refugee Forum (including Campaign and Food groups), Refugee Action and others are doing to improve this situation in spite of the difficulties.

However, in what is no doubt becoming a tiresome story for some on Notts Indymedia, little more than 10 minutes after setting up stall we were approached to ‘move on’ by Community Protection Officers (numbered NW9963 and NW9944). This time we were told ‘Moving on’ meant mean moving the whole stall from a sheltered spot just outside of the Farmers’ Market area over to the Lions. It was hard to find out exactly why, but it seems that the Farmers’ Market organiser had asked them to do it, and they had dutifully complied!

Considering the Square is a designated public space we were a bit loath to move from our spot without some explanation. None was forthcoming although were referred by one CPO to the authority of one Matt Gilbert who apparently has something to do with square bookings. As he wasn’t available we said we were happy to speak with the Farmers’ Market organiser (some of us were also customers, after all!) but the CPOs didn’t bother to pass this request on. It then turned out that they couldn’t actually make anyone move, they were just acting on the request for us to do so. Without an explanation we stayed put, but the CPOs continued to watch us for an hour taking notes and photos (we understand one of them is a keen amateur) - clearly not being needed for any other protection duties that day…

We know that Nottingham Stop the War have had similar problems, although ironically that time we think they were too close to the Lions! Plus people doing nothing more than waiting for friends have been asked to step down from the Council House steps. This story just shows how easily how the City Council’s allowing business interests to operate in the new Market Square can start to make them think that suddenly they can tell members of the public where they can and cannot stand.

So who’s Square is it really? What would happen if some people started questioning the ‘right’ of businesses in Nottingham to sell goods made by child or prison labour, or practices contributing to environmental destruction. Would the CPOs have a word with those businesses for them?

No Borders Nottingham will continue to increase awareness of asylum seekers in Nottingham.

http://www.indymedia.org.uk/en/regions/nottinghamshire/2007/05/370877.html
*Situation in the Congo is worsening as deportations continue,

*Our Square Isn't it?

Photos of the event 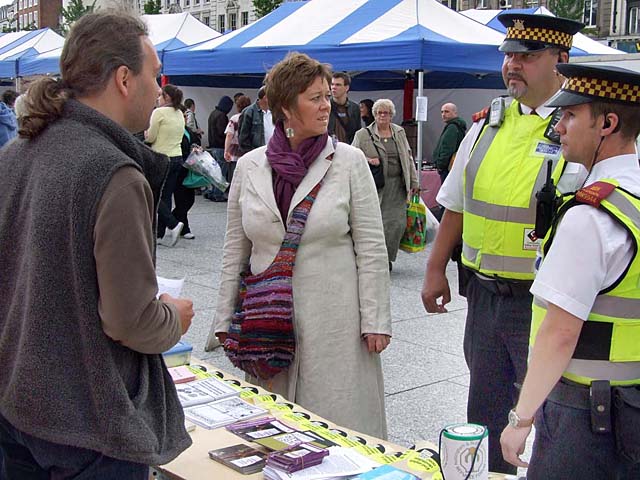 Photos of the event in Nottingham: