Report: May 17 demo at US Embassy for Mumia Abu-Jamal 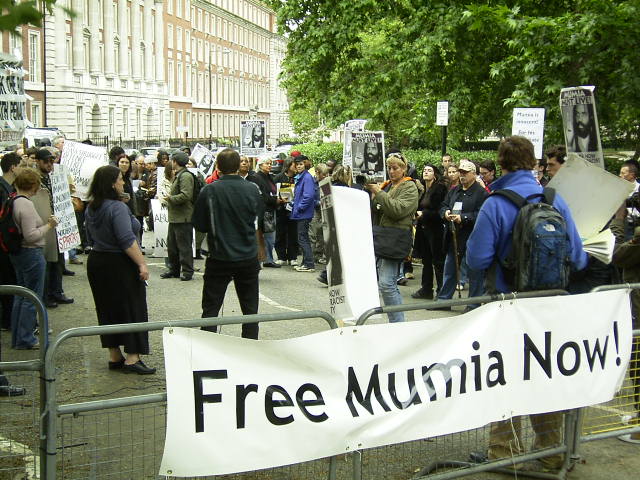 Free Mumia Abu-Jamal! Abolish the racist death penalty! Mumia is innocent! were among the chants from a 100-strong crowd outside the US Embassy in Grosvenor Square.

Protests took place internationally on Thursday 17 May, the day Mumia's case was heard before three judges in the US Court of Appeals of the Third Circuit – just below the Supreme Court. A decision is expected within 90 days.

Greetings were read to the London rally from the International Concerned Family and Friends of Mumia Abu-Jamal in Philadelphia,along with a statement from William Singletary, a witness to the 9 December 1981 events, who asserts that Mumia did not arrive on the scene until several minutes after police officer Faulkner had been shot.

Contributions to an open mic were made by supporters of MOVE, Friends of Africa, the Partisan Defense Committee, the International Bolshevik Tendency, the Spartacist League, Legal Action for Women and individual Mumia activists. A collection for Mumia’s legal defence raised £40.

For more pictures of the demonstration see:

For the latest news from the court hearing, see this interview with Mumia’s attorney Robert Bryan.

For further information on the case see:

The correct link for the Robert Bryan interview is: