Newcastle Report on May 19th Day of Action for Asylum Rights 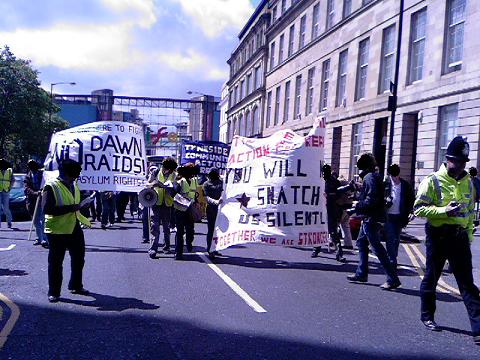 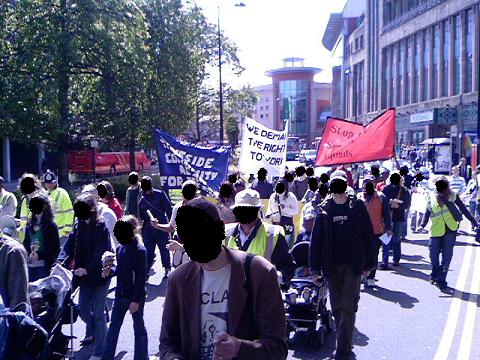 Back end of the march 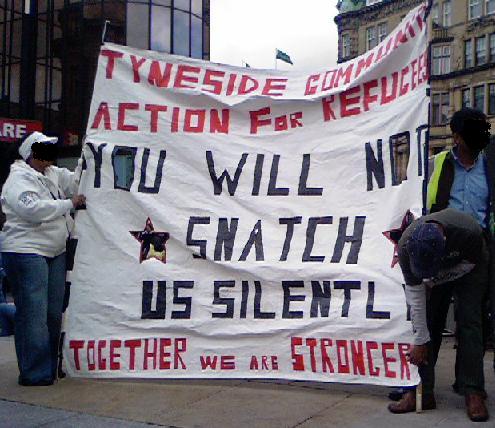 Title of the demonstration 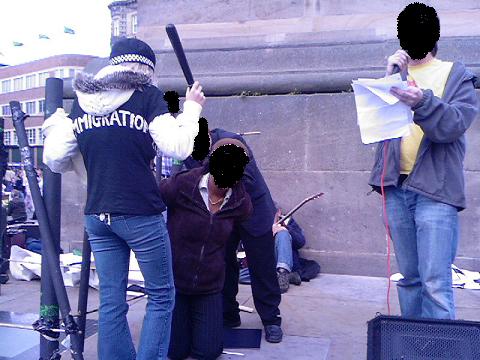 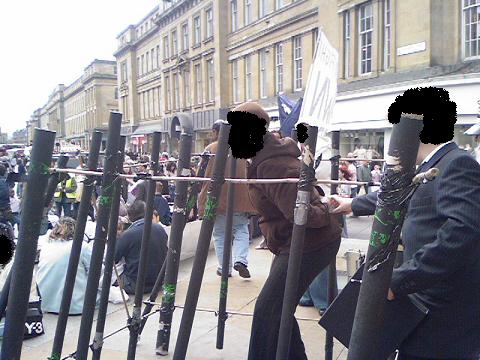 The theme of the demonstration was ‘You will not snatch us silently!’ and the demonstration was anything but silent. Participants brought pots, drums and whistles and there was constant chanting of ‘One, two , three, four: Deportation no more!’, ‘Together! Together! Together we are stronger!’ and ‘Deportation is a crime:Lock up Labour!’. TCAR now has a myriad of banners to explain our demands, with slogans such as ‘No Dawn Raids’, ‘We’re not here for benefits. Let us work!’

When the marchers arrived at the Monument there was more chanting and an open mic system for anyone who wanted to speak. By the end of the 2 hours many people had gained the confidence to use the mic. Speakers included a member of the Palestine Solidarity Campaign, a member of the MDC, the Zimbabwean opposition group, an Ivorean member of TCAR, members and supporters of the Revolutionary Communist Group, two young members of the Woodcraft Folk as well as many more members and supporters of TCAR. It was particulartly inspiring that so many young people spoke and participated in organising the demonstration. At least three of the people to use the open mic were under the age of 14 and young people were the main participants in the street theatre. Equally inspiring was the support the demonstration was shown by working class residents of Newcastle. One young woman expressed her anger at the racism of the current system, pointing out that asylum seekers get treated differently from English people because of the colour of their skin. Another young man, who had been sitting on the Monument and stuck around to support the demonstration, spoke passionately about the need for solidarity with asylum seekers.

The street theatre was a story about a dawn raid, the detention and deportation of a Congolese woman and her baby. Young members of TCAR, some of who have witnessed dawn raids themselves, acted out an immigration snatch squad, kicking down a door and dragging out mother and child. Costumes and a large cardboard cage added to the visual impact of the theatre while a narrator explained what was happening so that passers-by could learn more about the reality for asylum seekers. Demonstrators hissed and booed the immigration officials.

The last year has really shown a distinct shift in attitudes about asylum seekers with a lot more open support being shown in communities and on the streets. As TCAR has grown and become more diverse in its membership, this is having a snowball effect as more people can identify with us and feel comfortable to get involved. TCAR isn’t ‘just asylum seekers’ or ‘just activists’ – this was shown very clearly on Saturday.