Members of a new group 'Wrexham Women for Peace' and their supporters
held a 'funeral procession', carrying coffins and a peace flag through
Wrexham town centre on Saturday in memory of those whose lives have been
lost in conflict worldwide. 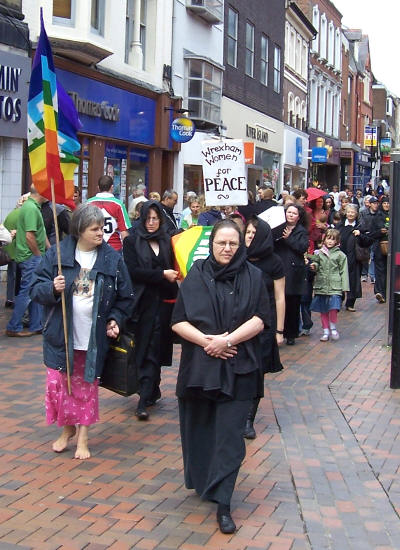 The procession in the main shopping thoroughfare 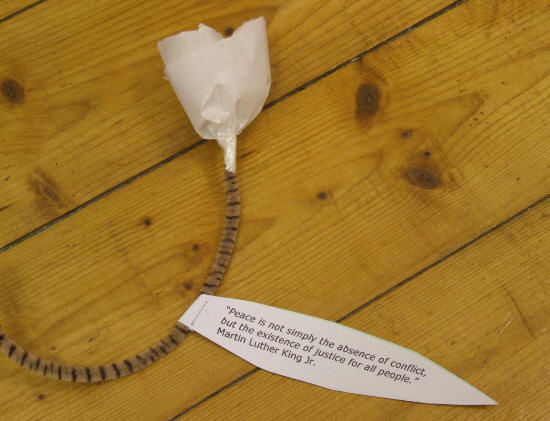 A flower for peace 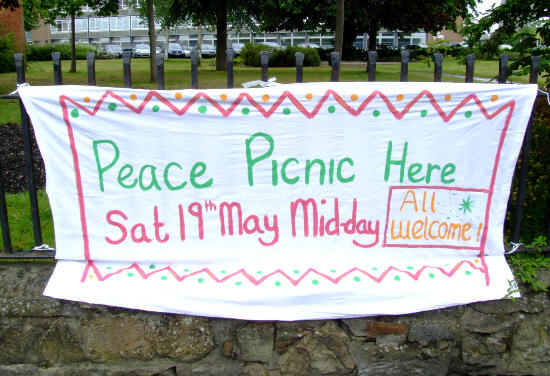 The women, accompanied by several children and babies, began by holding a silent 15-minute vigil at the War Memorial. They then laid a wreath on the steps of the army recruitment offices where they observed a further minute's silence. As the sombre procession parted the hordes of Saturday shoppers, women handed out hand-made paper flowers with peace messages. The procession ended at Wrexham's under-used Peace Garden, where a picnic was held, to which men were also invited. Yummy vegan
food was provided by Wrexham Veggies and others.

Wrexham Women for Peace calls for investment to be diverted away from the arms trade that supports worldwide conflicts and into measures to improve health and welfare and reduce poverty. Just one tenth of global spending on the military would provide the basics of life for everyone - food, clothing, clean water, sanitation, literacy and a minimum income.

Members of the group made the following comments after the action:

"Our slow procession gave me time to remember the many parents who have had to join funeral processions for their innocent children killed in wars and conflicts all over the world. It is difficult to get your head around the amount of senseless deaths and wasted lives, so we often push it to the back of our minds. It is important sometimes to take time out of our busy lives to get in touch with the magnitude and obscenity of it all."

"As we stood in silent reflection at the war memorial, I thought about all those who have died as a result of British and US intervention abroad, particularly in Iraq. Most of the victims were just ordinary men, women and children. I feel responsible for not having done more to stop the government perpetrating this bloodshed. At the army recruitment office, I thought about the soldiers dying in Afghanistan and Iraq, and about those who return from war injured and traumatised. These young people should be our future. Instead we are sending them to their deaths or condemning them to a lifetime of mental distress."

"If we have diverted people's attention away from shopping onto more pressing concerns for even a few minutes, then this action will have been worthwhile."

"We were encouraged that several of the women who came along to this event had only read about the action in the previous day's local papers."

It has been suggested that the picnic should become a regular event at the Peace Garden.