If he had not chickened out of entering by the front door, John Howard would have been met by a peaceful but vigorous protest last night at Crown Casino ... 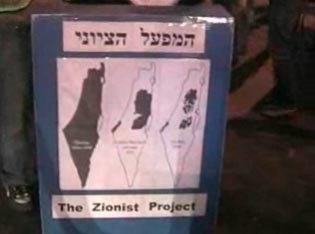 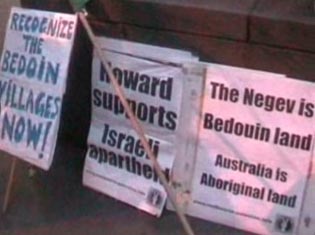 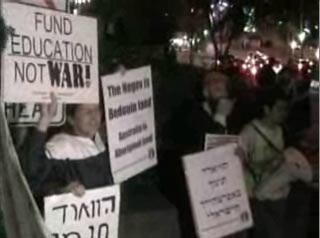 As it was, those of the 1200 or so guests who did roll up to the Queensbridge Street entrance had plenty of time to study the placards - some in Hebrew - banners and flags of protesters and listen to the range of chants. The light was poor, but these clips should give a reasonable idea of what it was like.

By way of background, here is the callout from the Melbourne Palestine Solidarity Network, main organisers of the protest:
[Quote]
End all ties with Apartheid Israel now!

John Howard is to have a forest named after him in Israel's Negev region, awarded by the Jewish National Fund (JNF) at a ceremony held in Melbourne.

Howard will receive this 'honour' for his 'genuine commitment and friendship' to the expansion of Zionist terrorism.

Howard sees Australia as an ally to some of the most reckless, blood hungry Imperialist governments in the world, such as the US and UK, who along side many of Australia's current and former political leaders, are staunch supporters of Israel's continual war crimes.

Come and protest the unholy alliance at a PEACEFUL picket, as the PRIME MINISTER VISITS CROWN CASINO to further consolidate his ties with the biggest rogue state in the Middle East.

And this from AAP:

[Quote]
Prime Minister John Howard has avoided about 100 protesters gathered outside Melbourne's Crown Casino, where he is delivering a speech to a Jewish group on Sunday night.

The Melbourne Palestine Solidarity Network called the protest to highlight what it calls the racist disregard for the rights of Palestinians and other indigenous people of modern-day Israel, as guests arrived for a Jewish National Fund dinner inside the Crown complex.

The protesters chanted slogans including: "No justice, no peace, US out of the Middle East, free Palestine" and "Stolen land, Israel, stolen land, Australia" as a strong contingent of police and security guards looked on.

Police advised the protesters about 7.15pm (AEST), about 15 minutes after the prime minister's scheduled arrival, that he was already inside.