Despite its trendy reputation as a favourite haunt for Brixton’s liberals the Ritzy Cinema is being far from kind to its staff. If you go to the Ritzy during the Human Rights Film Festival you will get see many worthy productions that rail against the exploitation of workers across the globe. Meanwhile the cinema is paying its staff the minimum wage of £5.35 an hour in the most expensive city to live in the country…. 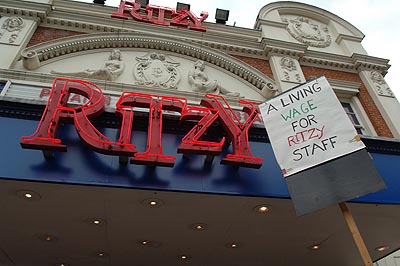 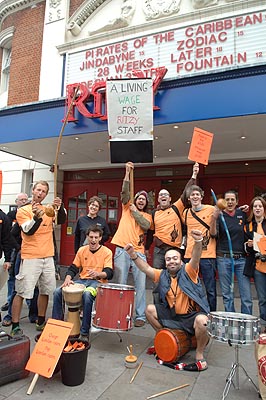 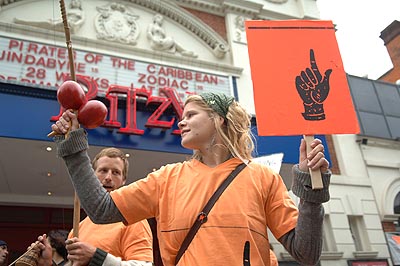 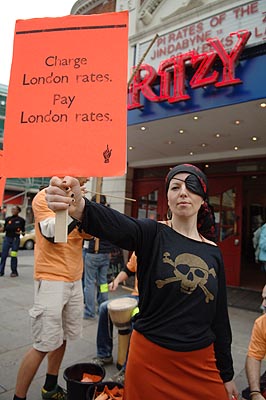 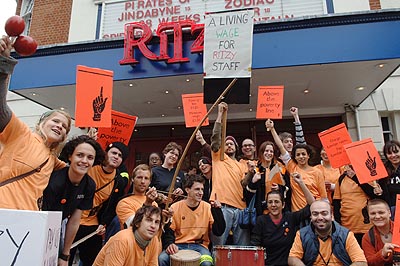 Picture House (City Screen) cinemas took over the Ritzy in 2003 and refused to recognize the BECTU Trade Union which the staff were members of. Instead the management set up an alternative to the union called ‘The Forum’. This is a well known tactic of bosses who prefer to deal with a toothless organization representing workers rather than a union. After a court case (which the management lost), the union was finally recognized in 2003 and real negotiations began in 2004.

All the staff are part time except for the chief projectionist and the assistant and general managers. The staff in the café do not leave work at weekends until after 1 am with most ushers finishing after 12. Despite these unsociable hours the management are still refusing to budge from their slave wage offer. The latest deal on the table is an insulting rise from £5.35 to £5.42! Alternatively the staff have been offered £5.50 without their sales bonus.

Unsurprisingly the staff have voted unanimously to hold strike action and today was the first day. The action was timed to coincide with first night of ‘Pirates of the Caribbean’ so some of the protesters dressed accordingly. There was also a drumming band to liven things up and it has to said that the picket line was loud and well attended. The management have brought in scab labour from their head office to fill the gaps. How they will cope remains to be seen. They have also started trying to intimidate the staff over the strike.

Please show your support by emailing

ritzy@picturehouses.co.uk to say that you will be boycotting this cinema until they start paying their staff properly.

Guess which letterbox-mouthed barrister represented the management in their bid to defy the human rights act by not recognizing the union? 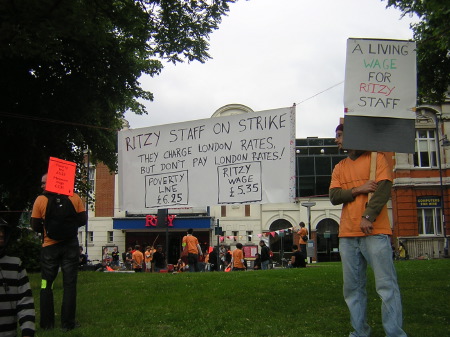 Strikers at the Bixton Oval 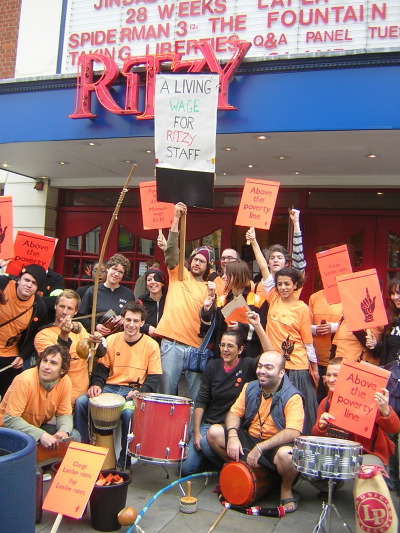 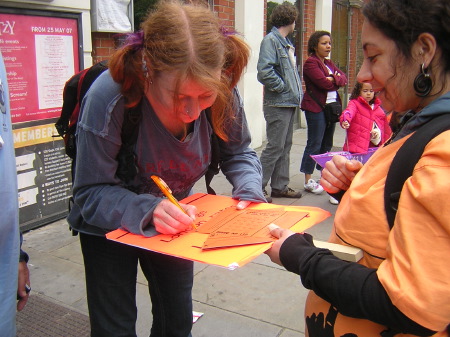 Strikers collecting signatures from passers by to support their demands ... 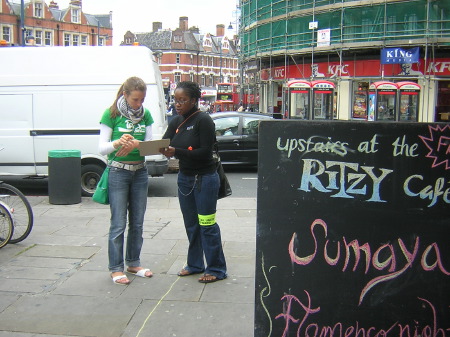 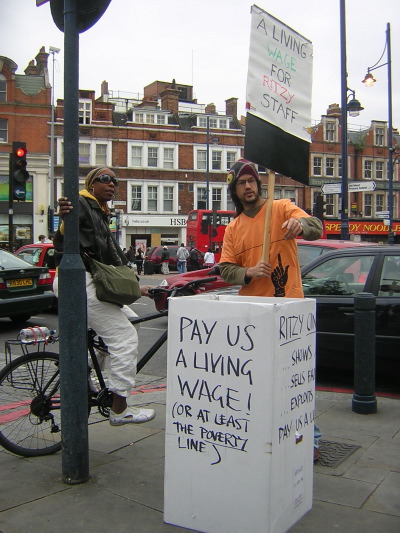 ... whilst others stopped to hear about the striker's demands. 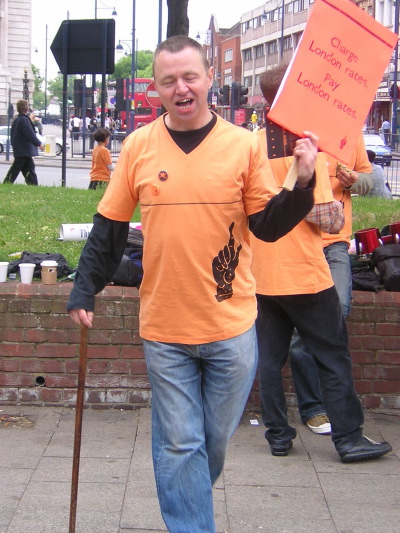 Striker with a t-shirt pointing at the poverty line 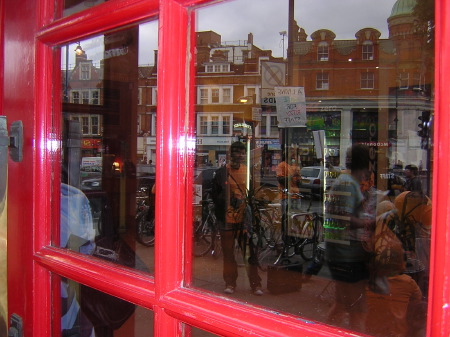 And so the Ritzy wasn't as busy as it would usually be on a Saturday ... 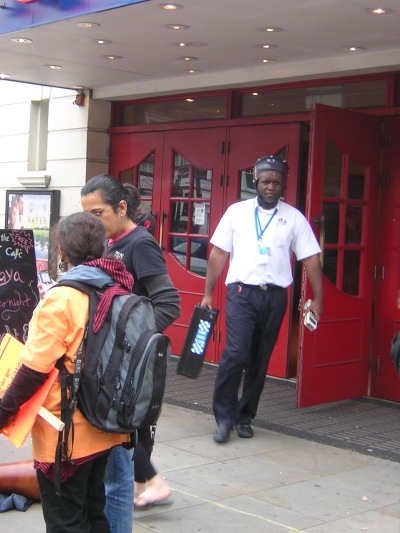 .. which probably made a cut on City Screen's takings for the day :-)

Staff at the Ritzy cinema in Brixton spend the whole day yesterday in a very lively picket line to protest against their pay rates and working conditions. The picket was well attended throughout the day, whilst many local people showed support for the Ritzy staff demands by signing the strikers' petition below:

The Ritzy is owned by City Screen Ltd, notorious low-payers of the cinema world.

Currently on the minimum wage of £5.35, Ritzy staff have been in ongoing negotiations about pay through BECTU (Broadcasting, Entertainment, Cinematograph and Theatre Union)

In a final attempt to resolve the issue, Ritzy staff proposed a 3-5 year pay settlement to bring us closer to the living wage.

The living wage is currently set at £7.28 per hour, the amount needed to comfortably live in London.

City Screen stated they would never pay the London poverty wage of £6.25 per hour (as set by The Greater London Authority).

The poverty line is the minimum amount needed in order to survive living in London and takes into account increased living costs such as utilities and transport.

We are taking industrial action because we feel undervalued in the workplace and overworked due to a reduction in man-hours. This has a knock-on effect to costumers who receive a lower quality of service. We feel that this is unacceptable and urge you to support us in our fight to re-establish the quality and values that London's Best Neighbourhood Cinema (Living London Award 2006) was built on!."

Please support us by signing our petition below, and please email it to City Screen at:

I Support the Ritzy Cinema staff in their right to take action for a fair wage on or above the poverty line. I expect City Screen to resolve this issue by reopening negotiations and acknowledging the poverty wage in any future pay offers.
Comments:
Name: