Oxfam, Cafod, Save the Children and over 90 other UK NGOs commandeered phoneboxes on the South Bank and Camden this weekend to give people the chance to let off steam. Members of the public went into the specially fitted out phone boxes to shout against poverty and let the G8 leaders know that they must act now on debt cancellation, aid, healthcare, sanitation, education and climate change.

The stunt is part of The World Can’t Wait – Your Voice Against Poverty Campaign, which will be followed by a huge rally in Westminster on Saturday 2nd June, prior to the G8 Summit which starts in Germany on 6th June. 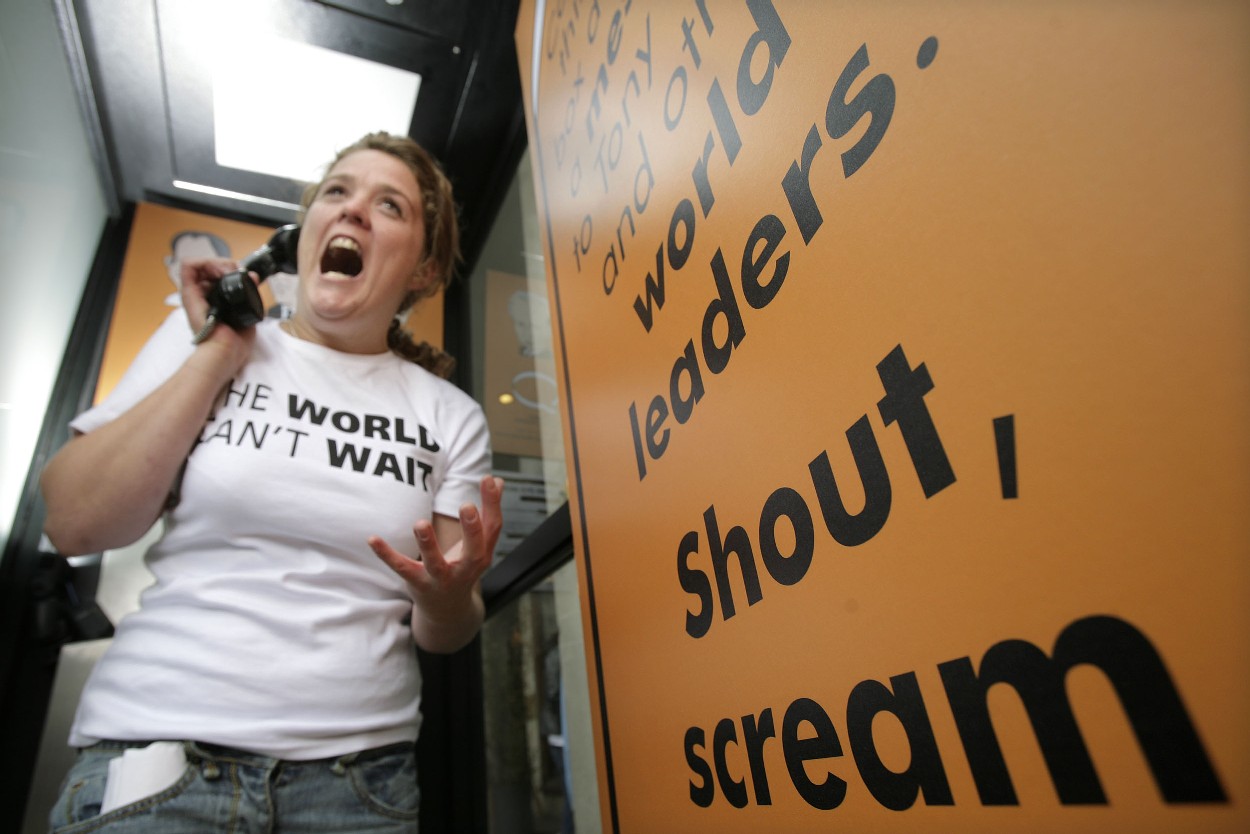 Hackney based activist Hayley Baker, activist (pictured) said
"I wanted to leave a message to world leaders to say sort out your act around HIV and AIDS. There are more than five million people who are living with HIV/AIDS in the world, who do not have access to the vital medicines to keep them alive. This is shameful. As the clock ticks, peoples' lives are lost. The World Can’t Wait - World leaders must act now. "

100,000 people in the UK have already taken action in support of the campaign.

Correction to URL above

The 'world leaders' are the problem-they are in the pockets of corporations. Liberal market reforms are a con. Like the shite Make Poverty History supported by stuck up white bourgious and 3rd rate academics and social workers .but really run by the likes of Business for Africa (MMS),another neo-colonial outfit serving the interests of warmongers like Anglo American Mining and oil companies who keep conflict going for your luxury middle class Guardian reader lifestyles.
Cake and eat it?
Fairer trade?
Who really gets the money?
Who has the land? Here? There? You are actually part of the problem.


BTW.Standing in a phone box in in Camden ( another place like Hackney where the divide between rich and poor is acute ) doesn't solve anything. Good place for mugging the rich tho...

I have seen the latest Make Poverty History campaign ( whatever they are called now ) and itreally makes me sick - patronsing overpaid overfed bastards.

Comments should be factual correct

Make Poverty History did not call for market liberal reforms but the push for the liberalisation of developing countries to be be stopped. It called for an end to Western subidies that result in dumping. Make Poverty History was not run by Business for Africa (MMS) or any business organisations (only purely fair trade companies not ones that have other products could affiliate). The coalition called for the regulation of corporations like Anglo American Mining and oil companies (and made some gains in this in 2006).

Yes, standing in a phone box in Camden doesn't solve anything in itself (er, it's a publicity stunt for a bigger event - part of a global mobilisation). Nor, let's face it would Bono dying, although it seems you think so. You are welcome to your opinions, but try to get your facts straight.

Perfect example of why traditional post-Situationist "intervention in everyday life" type politics is useless, ie. it has been completely recuperated by the PR industry. As the first commentor suggested, MPH was sickening. It was just a huge PR campaign to help Western corporations in their neo-colonial post-cold-war cold war with China's state industries for Africa's oil and natural resources. To believe anything else you'd have to be a credulous, brainwashed mass media spectactor.

Heh, call me a credulous, brainwashed mass media spectactor, but where is your evidence that Make Poverty History was just a huge PR campaign to help Western corporations in their neo-colonial post-cold-war cold war with China's state industries for Africa's oil and natural resources? The Global Call to Action Against Poverty, of which Make Poverty History was the UK 2005 part of the global campaign, is now a global alliance of trade unions, community groups, faith groups, NGOs and other campaigners working together across more than 100 national platforms. It's the biggest anti-poverty campaign the world has seen. If you have a problem with a movement led from the global South like this, that's up to you. But if you cannot supply any evidence to back up your point of view you have less than a very weak argument for what you are saying. In truth you are factually wrong. You may not like popular radicalism but if you are going to knock it, do so on the basis of objective analysis.

Oxfam likes poverty...it makes them the millions for their directors and corporate funders.

Famine an industry;poverty the tag line that gets you suckers paying.

So what are YOU doing to end poverty?

Perhaps Die Bono Die and Tofu Dealer can tell us what THEY are doing to end poverty, since they obviously know so much more about it than the rest of us?

Or are they just know-it-all windbags who are quick to slag off everybody else's efforts without actually having anything constructive to offer in its place?

It's enough to put anyone off activism!

The forces ranged against progressive change are powerful, from corporations to political elites, to the harsh fact that most people who live in this country either don't care about the issues or feel powerless to do anything about them.

It is surely better for all who care about progressive change, be they radical or reformist, to concentrate their fire on the targets that really matter, rather than wasting time sniping at easy targets on their own side.

The people behind movements like Make Poverty History and The World Can't Wait believe in communicating with a mass public audience - and work hard to engage normal people with the idea that we can be politically active citizens who have the power to change the state of the world. This often requires compromises in communicating through the corporate media or adopting many of the strategies of corporate PR. Most people who work in the mainstream NGO sector are very aware of this, and worry about it.

If these kind of "mainstream campaigns" are really harming the achievement of real progress, then that's important and we need to see the evidence. It's a waste of time just sneering at people who are working hard actually trying to change things.

The problem of the Christian approach to world poverty is apparent ...

The African women's NGO Rainbo has been forbidden to exhibit a controversial sculpture at the Your Voice Against Poverty rally at the brink of the Thames in London on 2nd June. The Danish artist Jens Galschiot is astonished. He declares: "I have been censored by totalitarian regimes, but I have never imagined my sculptures to be banned by 'progressive' Western NGOs."

The ban has been decreed by BOND, the organizer of the event, allegedly motivated
by a wish to please the affiliated Christian organisations. The banned piece
of art is a handsome bronze sculpture depicting a crucified pregnant teenager,
created by Danish sculptor Jens Galschiot. The sculpture titled 'In the Name
of God' has been cast in various varieties as an accusation against the crusade
against contraception and sexual education orchestrated by Christian fundamentalists
with President Bush and the Pope in the lead.