At a committal hearing earlier this year, it was alleged that police went on a fishing expedition of a few suburbs to find alleged material you'd pick up at the shops or on the internet. 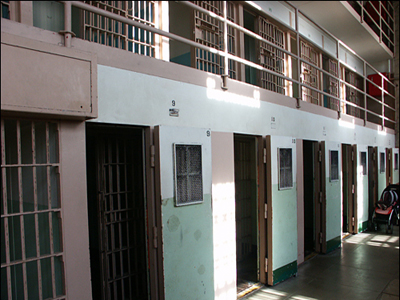 Nine Sydney men [political scapegoats] have pleaded not guilty to charges of conspiring to plan for a terrorist attack at no place and at no time.

To wind up the fear factor, heightened security was present around the New South Wales Supreme Court when the nine political scapegoats appeared this morning.

Some of the men waved to supporters in the courtroom.

They each pleaded not guilty to a charge of conspiring to prepare for a terrorist act between July 2004 and November 2005.

They refused to stand to enter the pleas, for religious reasons.

At a committal hearing earlier this year, it was alleged that police went on a fishing expedition of a few suburbs to find alleged material you'd pick up at the shops or on the internet.

Police alleging that the men had recipes to make explosives and used false names to buy chemicals and other ingredients.

The trial has now been set for February next year.

The prosecutor indicated the Crown case could take up to eight months.

The men reserved their right to challenge the validity of the charge.

9 to stand trial over political scapegoat plot
The men were arrested last year in Australia's largest-ever fishing expedition and [are alleged to have been] plotting to carry out an attack on a target in Sydney. [Usually well know landmarks like the Harbour Bridge, Opera House, Lucas Heights Nukiller Facility, did I leave anything out?] Oh! [Kirabilliy House?] [How about the electricity grid?] They didn't say so I'm just guessing?

PRISON AUTHORITIES RAISE RELIGIOUS FEAR
NSW Justice Minister Hatzistergos is trying to frighten us with the threat of domestic terrorism to justify spending almost $1 billion a year and still having the highest recidivist rate in the country² said Mr Collins.

SuperbadSuperMaxMuslims
Nice to see the comments are sane as usual here at Indymedia.
Yeah, this thing of "Super Max Muslims" has been kicking around a while. Could be something to do with an FBI report a few weeks ago on the same "phenomenon". That is, prisoners=bad, Muslim prisoners=superevil. Political capital to be made out of bashing both Muslims and prisoners=superfantastic.

Standardising terrorism in the prison population?
Try giving us hope, access to our communities, a sense of caring by the outside community. And letting us out to make restitution instead of building festering anger.

Scapegoats accused 'exploited' by guberment prostitutor
The rest of the prisoners had to stay in jail in AA maximum security segregted with no contact with human people in a box within a box with no fresh air or sunlight with the worst of the worst offenders.

Jury indicated it could not reach a verdict, but was ordered to push on?
These charges were that he collected maps of the Australian electricity supply system in preparation of a terrorist act (15 years), BUT WITH NO DETAILS ABOUT THE PREPARATION ACCEPT MATERIAL TO SUPPORT THOUGHT CRIME? that he sought information on chemical prices for the use of explosives for a terrorist act (life), BUT NO SOUND EVIDENCE ABOUT WHETHER THE CHEMICALS WERE GOING TO BE PURCHASED OR USED FOR THE USE OF EXPLOSIVES OR A TERRORIST ACT and that he possessed a document with information on the manufacture of poisons and bombs in preparation for a terrorist act (15 years). THAT HE LIKE MANY OTHERS MAY HAVE DOWNLOADED FROM THE INTERNET WHICH IS NOT ILLEGAL USUALLY?

A dangerous precedent: Australian man convicted of “preparing terrorism”
Since 2001, the government has seized upon the “war” declared by US President George Bush for both domestic and international purposes. Under the guise of combating terrorism it has participated in the invasions of Afghanistan and Iraq, diverted attention from mounting economic and social problems at home and legitimised previously unthinkable police state-style measures, including semi-secret trials, “preventative” detention and the ability to impose life sentences without any evidence of an actual terrorist act.

Secret evidence used in Australian “terrorist” trial
Lodhi was bundled into the court building in shackles, in full view of the media. The display was intended to convey the impression that he is a violent and highly dangerous individual. Like several other Muslim men charged with terrorist offences in Australia over the past year, Lodhi has been denied bail and held in virtual solitary confinement in a “super max” prison, cut off from family and friends. Under state and federal “counter-terrorism” laws, the traditional presumption in favour of bail has been scrapped. It will only be granted in “exceptional circumstances”. On receiving a confidential affidavit from the Commonwealth, Magistrate Michael Price imposed a number of secrecy orders despite vigorous objections by lawyers for Lodhi and by media organisations. The orders mean that the affidavit itself will remain suppressed, and the media is barred from disclosing even the general nature of the material relied upon in it.

Merry Christmas Mr Kent and Mr Haddara
After and ASIO fishing expedition they were charged last month with knowingly belonging to a Melbourne-based terrorist group, that did not exist.

ASIO raid family home
This is an assault on civil liberties, for all Australians - on the eve of Human Rights Day 2005 that marks the day in 1948, that the United Nations adopted the Universal Declaration of Human Rights. Shame hoWARd shame on you!

Tight security impedes scapegoat case
Indymedia has learnt this includes a bank account his supporters say was set up to fund legal representation for Muslims facing any kind of legal action. The prosecution is understood to allege the money was intended for terrorist purposes.

Some evidence is prejudicial to national insecurity
It has been previously reported that he is facing nine charges and is accused of planning a major terrorist attack on Sydney defence sites and the electricity grid using downloads off the internet and having 100 rolls of toilet paper to wipe his arse after low level bombs and farts. Shit!

Terrorism suspects' custody conditions 'inhumane'
"This treatment is very cruel and inhumane and what I've put forward to the Premier Morris Iemma to intervene and put an end to this scandal," he said.

Things and places identified
He said Mulahalilovic worked as a handyman, lived with his wife, parents and brother and, with the help of family members, could provide around $1 million security to ensure his freedom until trial.

Dangerous handyman terror threat?
But the only mother of SATAN here is John HoWARd and his new Ant-Terrorism Bill!

Terror suspects 'kept in dark'
"They're all kept in solitary confinement, they're kept in Guantanamo Bay style conditions and they're very oppressive," he said.

What are the dangerous chemicals police found when they went fishing?
If police say they were making bombs when they were painting motor vehicles then the only terrorist act that wasn't prevented was when police went on a fishing expedition.

Man shot by police in fishing raids
But there is no such thing as an independent investigation team in NSW because police investigate themselves and cannot be relied upon ever.

ASIO fishing expedition makes arrests
Are you satisfied truthseeker? Well I'm not this is just another public relations exercise that no one can prove. But trust us we know best?

hoWARd, ruddock, ellison, keelty and news ltd plotted chaos
Now they go on in the article to describe themselves as intelligence officials? But I'm sorry to say that any group of people who ask another group of people to believe what they believe based on no evidence is amongst the most unintelligent and lost group of people the world has ever known.

Houses raided over 'possible' political attack plans?
"Furthermore, nothing is reasonable about a raid on people's homes because for an alleged possibility. For those sorts of enquiries one should approach a 'soothsayer' and if you get the all clear only then should they approach people via the front door with the appropriate warrant to search one's home. A warrant based on concrete evidence that has been filtered by a juge or magistrate of the court to see whether the material is frivolous or vexatious."

Australian prisoners' linked to Bin Laden: Ten News
Hatzistergos: "For example, because of a perceived risk that they may engage in, or incite other persons to engage in, terrorist activities."
Terrorist prisoners held in a "box within a box" with no "fresh air or sunlight" at Goulburn HRMU may incite alleged terrorists in Long Bay to blow up Long Bay Prison's Twin Towers?