On Tuesday 19 June, (7.30pm Victoria Hall, entrance on Chapel Walk), representatives of oil workers and communities in Colombia visit Sheffield as part of a UK tour seeking solidarity with their resistance to BP's anti-union policy, its collusion with death squads and its destruction of their environment. They are Edgar Mojica, Human Rights Commission of the Oilworkers Union USO; Manuel Vega and Martín Ayala, Casanare oil field communities; and Luis Hernandez, researcher at Universidad Nacional. 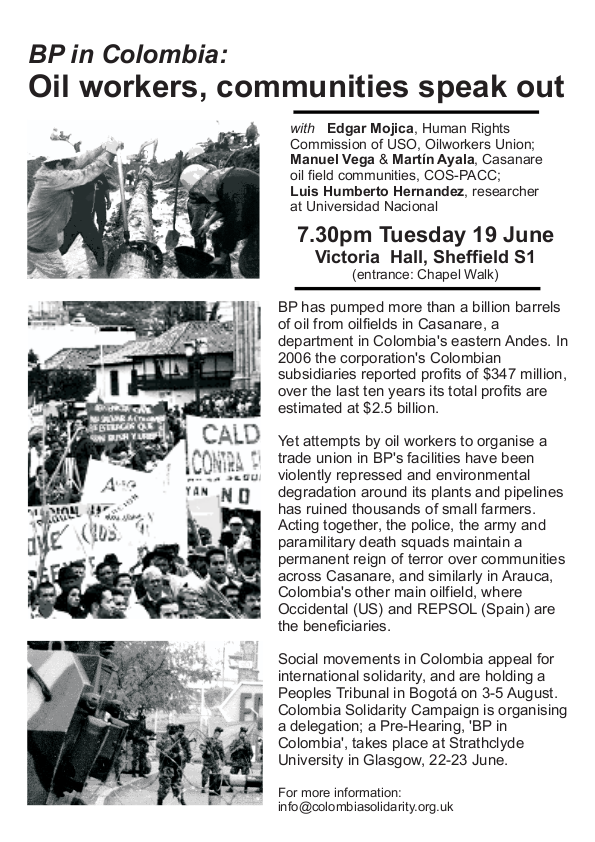 BP has pumped more than a billion barrels of oil from oilfields in Casanare, a department in Colombia's eastern Andes. In 2006 the corporation's Colombian subsidiaries reported profits of $347 million, over the last ten years its total profits are estimated at $2.5 billion.

Yet attempts by oil workers to organise a trade union in BP's facilities have been violently repressed and environmental degradation around its plants and pipelines has ruined thousands of small farmers. Acting together, the police, the army and paramilitary death squads maintain a permanent reign of terror over communities across Casanare, and similarly in Arauca, Colombia's other main oilfield, where Occidental (US) and REPSOL (Spain) are the beneficiaries.

Social movements in Colombia appeal for international solidarity, and are holding a Peoples Tribunal in Bogotá on 3-5 August. Colombia Solidarity Campaign is organising a delegation; a Pre-Hearing, 'BP in Colombia', takes place at Strathclyde University in Glasgow, 22-23 June.