Just after half past two when the march from the station was entering the harbour a scuffle broke out at the far end of the stadium area near the exit. Several police officers were dragging a man away while people around where trying to find out his name. The situation quickly escalated as more police were sent in to back up the others arresting the man. People were pushed back and then some sticks thrown at the police who responded with pepper spray. A wave of about 50 police followed a few seconds later, charging towards the crowd and was met with a hail of sticks and stones. 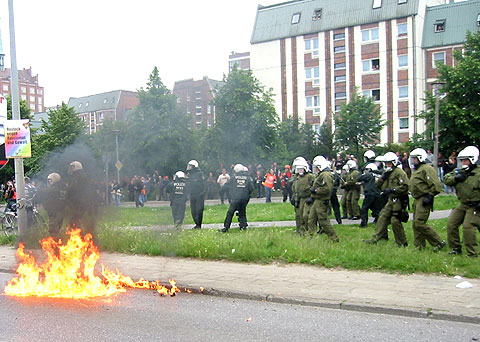 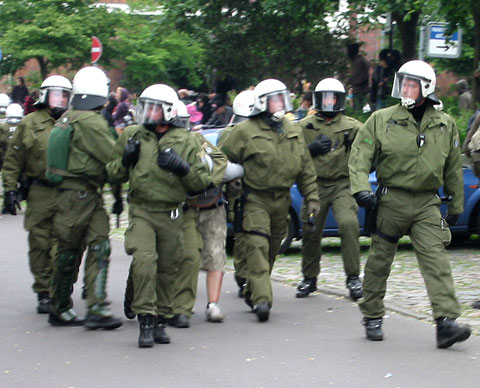 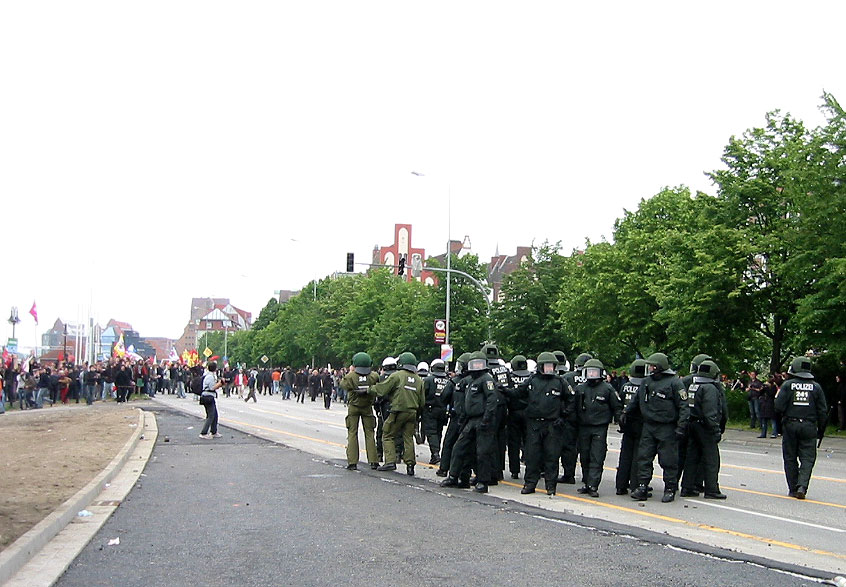 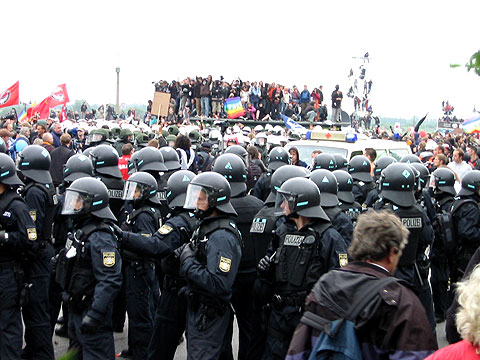 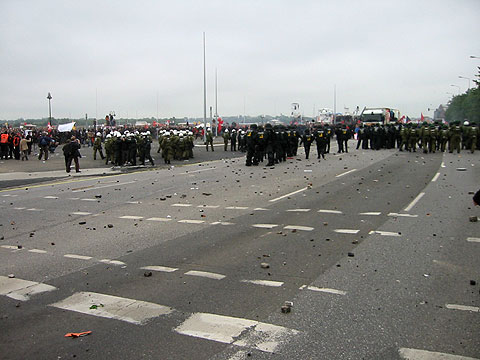 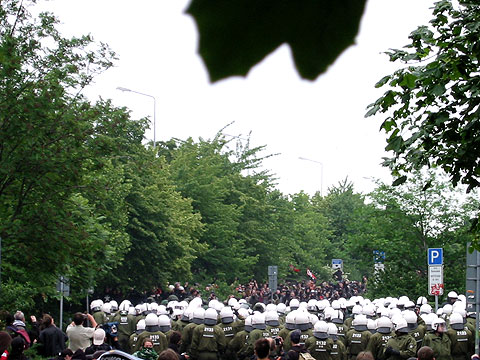 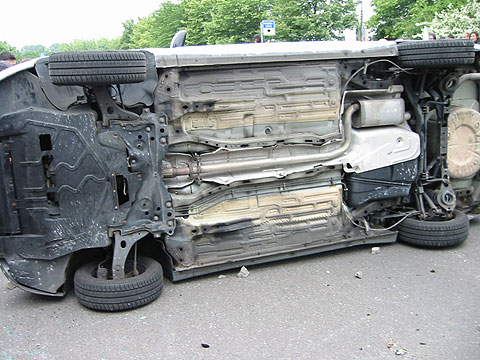 All in all for what was just about one arrest the situation very quickly got out of hand. The police repeatedly charged into the centre of the harbour area in squads of around 30 or so, and thus became surrounded by thousands of people... some might call it provocation.

At one point they were slowly pushed back out by a crowd of hundreds all with their arms raised above their heads, but then the police just turned around and charged back in again spraying people with pepper spray.

It was clear the crowd was prepared to protect itself from this police attack, but the police tactics just served to inflame the situation. Quite incredible given the march had passed off without incident.

Of course the harbour area was filled with tens of thousands of people and thousands more were still waiting to finish marching in. People stood amazed watching the police actions for at least one hour while they rushed back and forth along the edge of the harbour stadium area. There were at least two hundred riot police perhaps more involved in the main clashes.

It eventually subsided and people were able to get on with the rally / concert / chilling out, with the polcie witghdrawing, but it seems it's all started up again now and water canon and gas is being used... more later....

good accurater article on indybay imc re what happened today...

A description of today's massive anti-G8 protest in Rostock, Germany

Today in the German City of Rostock tens of thousands of protesters marched through the city in an opening show of opposition to next weeks Group of 8 (G8) meeting in Heiligendamm, Germany. The march had two starting points at opposite sides of the city. Both marches met at the central harbor for a closing rally and concert. Activists from many backgrounds came out for the march. Carrying banners, puppets and signs protesters called attention to the many reasons to oppose the the G8. This year climate change and war took center stage among the NGO set. A large and militant block of anarchists and anti-fascists also marched. With banners and flags flying they drew attention to the larger problem of capitalism and empire. It is no use to ask the G8 to do anything was the major sentiment. It just legitimizes an illegitimate authority.

At the city harbor a large concert was scheduled with acts from around the world. For months the German police have been saying they will be using all forces available to squash what they think to be violent protesters. Shortly after the block arrived at the harbor the police tried to split the march and isolate the anarchists. The police began shoving protesters and running into the crowd. Rocks and bottles were thrown at the police as the crowd quickly backed away. The whole rear half of the march was held up for over an hour as the police continued to advance on the crowd trying to break up the block. Several times protesters, with hands raised in the air as if to say “we are not armed” ran at police chanting “go away!”. Each time the police had to retreat the crowd would beak into applause. Many reports of injuries were made. Some protesters were carried away with bloodied heads from being hit by the police and flying rocks. Several ambulances were seen taking injured protesters away.

The whole while the concert went on.

For a time things remained calm but then the police re-entered the area this time with water cannons. Riot police charged the crowd and using tear gas and the water cannon pushed people towards the stage. Concert organizers immediately stopped the show and demanded that the police leave the area. The police agreed and began to retreat. But not for long. They came back with more water and tear gas. In what are called snatch squads, German police began to single protesters out for arrest. Many people began to be pulled out of the crowd, thrown to the ground and handcuffed. With air still thick with tear gas the concert struggled to restart as the crowd, many of whom were elderly or with children tried to escape the toxic gas. Protesters on the streets surrounding the harbor built barricades of trash and set them on fire to keep back the police. Water cannons were moved in to extinguish the flames from the barricades and several burning cars.

Mainstream media is calling it a riot and not mentioning the police actions to try and violently split the march.

Background:
For the past week protesters have been gathering at various camps in the areas surrounding Rostock and Heiligendamm. Three camps, one in Rostock, one in Reddelich and another in Wichmannsdorf are hosting 3-5,00 protesters each. Each camp is self organized with campers taking on the collective responsibility for food, cleaning, security and other daily takes. Each night in large nightly meetings held in huge circus tents. campers gather to report on the day and to gather volunteers for the many tasks. This is also where decisions are made about important questions regarding safety and security. Each camp is divided into barrios. The barrios are self organized by groups, countries, regions, and political background. Some barrios are simply made up of individuals.

Today´s action was the fist big day in a week of actions against the G8. Later in the week on June 6th as the summit opens protesters with descend on the roads leading to the posh resort hosting the meetings to build blockades. Organizers are planning on holding the blockades for multiple days. The goal is not to keep the leaders of the worlds 8 most powerful countries from having their meetings but to keep the support (food, media, etc) out. Each G8 meeting requires a great deal of logistical work and protesters plan to work on disrupting the smooth flow of support for the G8.

An English language news ticker with on the ground reports from the protesters is available here:

Information on the blockades can be found here:

General information on the protests can be found here:

Pictures from today´s protests are available on many mainstream news wires:

Video from CNN (take it with a grain of salt. You can´t trust the mainstream press, but has good images)