The year of Aviation

The aviation sector is set to become one of the most targeted of the climate-changing industries in the UK this year. 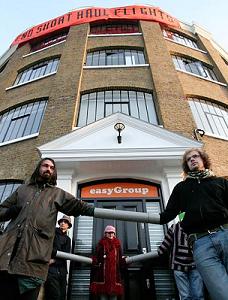 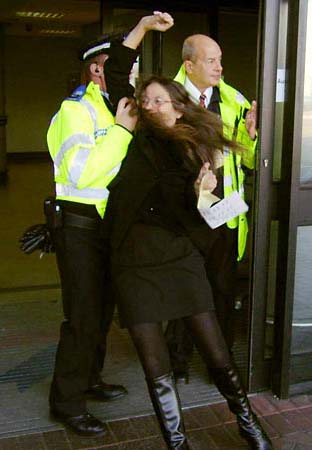 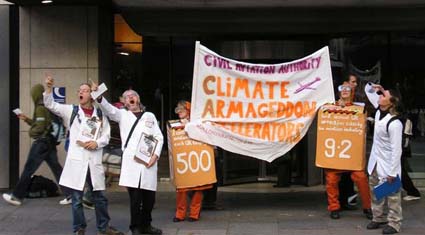 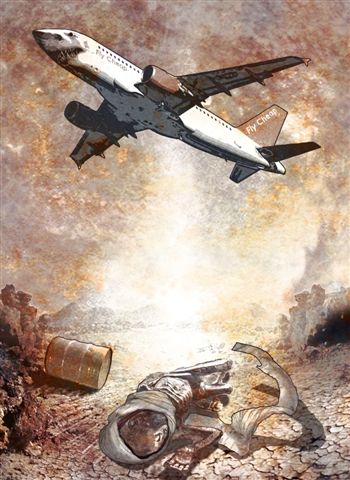 The UK government claims to be the most progressive of the developed nations in confronting climate change. But the approach with aviation is counter-productive to moves in the right direction. It is more than a blind spot; the government are advocating and supporting rapid expansion, which unless halted will see the UK flying industry’s output of climate-changing emissions rise to the level of the entire carbon budget for the country, in the same timeframe as the climate change bill plans to reduce emissions by 60%(1). International aviation is not yet included in the climate change bill, and nor does it look set to be.

Spokespersons for airline companies continue to mislead the public by quoting a 2-3% contribution to global CO2 emissions. References are not usually given but the figure corresponds to the Intergovernmental Panel on Climate Change (IPCC) report of 1990. Aviation emissions more than doubled during the following decade alone (DfT).

The figures quoted by industry also sidestep the fact that British citizens fly more than those of any other nation except the United States; if everyone flew as much as people in the UK, the figure would be about ten times as high. They also do not take into account that aircraft emissions in the upper atmosphere are especially harmful.

In May the government quoted the figure of 13% as aviation’s contribution to UK greenhouse gas emissions, which uses a conservative radiative forcing factor of two(2). If you include flights to and from the UK by UK citizens (the government excludes the former), the sector now contributes about 18.5% of the climate-changing emissions for which this country is responsible (see the Aviation Environment Foundation;

This proportion is increasing all the time, as aviation is the fastest growing source of greenhouse gas emissions. Expansion is already in progress at airports across the UK, following the government’s ‘The Future of Air Transport’ white paper of 2003- a manifesto for three-fold expansion. East Midlands for example, has so far this year added 6 new aircraft gates and a departure lounge, and is moving 20% more passengers compared to last year. Eleven new flights were added by one short-haul operator alone this spring, bringing another 500,000 passengers through the gates each year(3). In January the government also reiterated its aims for increasing the rate of expansion with the building of new runways, terminals and flight-paths across the UK.

While the industry continues to profit from tax breaks totalling over £9 billion a year, the average earner pays more than £500 a year in tax to subsidise air travel (HACAN Clearskies, 2003), but the government is not yet ready to redress the disparity. Consumers like air travel because it seems cheap, but we pay for cheap flights indirectly – whether we fly or not.

The aviation sector is however coming under increasing pressure from individuals and groups concerned with a range of issues, including climate change, direct health impacts such as harmful noise levels, further irreversible destruction of rural areas/habitats, and the demolition of entire villages. Groups are increasingly networking and cooperating. Government lobbying continues but has so far fallen on deaf ears, and campaign groups such as HACAN Clearskies are integrating the approach of direct action by sharing skills, organising action trainings and using more direct methods to communicate their determined intention to stop expansion on their doorstep. The past year has seen office occupations, blockades, and appearances at aviation and business conferences, including one attended by the minister for transport.

The industry cannot afford to ignore this pressure. With the media increasingly putting the spotlight on the issue and inviting airline companies to answer questions, the influence on public opinion is a challenge. Airline spokespersons commonly respond by stating that emissions from aviation comprise a small proportion of human CO2 emissions globally. Following full-page spoof pro-expansion ads and a broadsheet pull-out from action group Plane Stupid, the industry has dug into its pockets to respond. Last week The Independent, in collaboration with the Royal Aeronautical Society, published an entire supplement carrying features about the green future of the industry and its vital role in international aid work (e.g. 'How aviation can rebuild lives around the world'). The same edition carried another supplement with a headline feature on food miles.

The mass media is prepared to offer platforms for a debate about aviation; and while this may make people more aware of the concerns about air transport, more radical responses to the problem may deepen influence among millions of observers, as direct actions will be reported in the mainstream, ‘primetime’ news. Because of their current ‘newsworthyness’, direct actions can serve to further increase coverage of the issue. Active responses to the issue can directly affect the problem, and the responses to the actions will influence people; hopefully leading to more action to tackle the problem; the response needs to be sustained and have positive qualities.

Saturday, June 16 is the European Day of Action on Aviation. People from across Europe will be taking part, in agreement that short distance flights are unnecessary and irresponsible, and must be stopped if we are to prevent catastrophic climate change.

Last June, 30 groups took part in the first Europe-wide Day of Action, with activities ranging from street-stalls to the invasion by Dutch campaigners of the taxiway at Schiphol Airport. And with the environmental profile of aviation now firmly in the spotlight, this year hopes to build on the successes of the last, promising a feast of activities and with many more groups expected to participate. A recent conference in Brussels decided on short-haul flights as the key theme of the day. Both individuals and groups are encouraged to take part; a wide range of activities are possible, contact your local group, or email

If Heathrow was to shelve short haul flights to destinations reachable within three hours by train, 100,000 unnecessary flights could be cut and emissions amounting to 4,000,000 tonnes of carbon dioxide would be prevented.


The Camp for Climate Action…

Recently, those able give time for the planning of the second Camp for Climate Action agreed on and announced Heathrow as the location.

The camp aims to be a place for the burgeoning network of people taking radical action on climate change around the country to come together for a week of low-impact living- education, debate, networking, strategising, direct action, and indeed celebration of the achievement of living sustainable lives, happily and healthily.


A Callout for action on aviation, condensed time and overworked lives

This year will be remembered for a newly ferocious defence of people and planet with unprecedented numbers, and for strong, vibrant and inclusive direct action that must by its nature be focused - aviation is a target that is able to address both the individual’s most climate damaging behaviour, and the incredibly dangerous, delusional policy of the government. A broad, colourful and diverse mass of people taking action with regard to the problem of aviation, will challenge people to consider their flying behaviour and inspire them to try being a part of the solution, instead of the problem. Aviation as a target is justified because of a significant and fast growing contribution to global warming, ripe because of its unchecked, government driven expansion, and unique in demonstrating a most direct link -and therefore relationship- between the consumer and climate changing behaviour.


If it is the ladies who superglue themselves to the revolving doors of departure lounges; the people preparing to defend their homes and gardens against the bulldozers; the cloaked decorators of SkyLink bus stops and flight-pushing travel agents; or the massive gathering for living and learning at the climate camp in airportShire…


..a focused push that carries good communication with direct action
-underpinned by living and working examples of how we can live happily without fossil fuels- will help to create a visible alternative to fossil fuel addiction and frantic consumerism.


This is a call out for people, as individuals or groups, to take action on June the 16th, to highlight the grave impacts of travelling by air, and in particular over short distances which can easily be covered by using far less polluting means of transport. To contribute to the movement for sustainable living by being a part of the Camp for Climate Action; and to take action on any and every day, in drawing attention to our climate-wrecking behaviour and structures, whilst trying to build lives that don’t cost the earth.

It is change or be changed.

(1) In the context of overall falling emissions, if aviation grows at projected annual rates of 3% or more (5% is looking more likely), aviation will take up 100% or more of our national carbon budget some time between 2030 and 2050 (The Tyndall Centre).

(2) “Using a radiative forcing multiplier of two, emissions from flights departing the UK contributed approximately 13 per cent of total UK emissions in 2005.”

My point in all of this is that CO2 does NOT cause climate change; I am not arguing that a change in the climate might be occurring. The climate on earth changes all the time and that global change is caused by the Sun (a new NASA finding). All life on the planet is carbon based, CO2 is part of our food chain, and it is not a pollutant. The biggest “green house gas” is water vapor. If climate change is caused by human activity then we would need to start eliminating life on the planet, yes this is absurd, so is the assertion that humans are causing climate change. It just is NOT the truth.

Science fact 2+2=4 a scientific fact is a truth that never changes can be reproduced by anyone every time.

Climate change is caused by the sun: