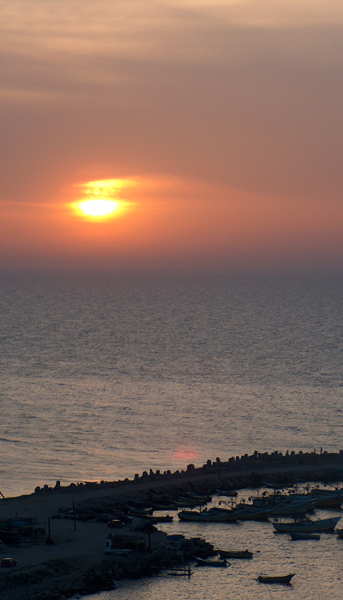 Greta Berlin, 66 years old, is a businesswoman from Los Angeles, CA. She is the mother of two Palestinian-American children and has been to the occupied territories twice in the past four years with the International Solidarity Movement. She is also a member of Women in Black Los Angeles.

She is one of many other people, who have organized an unusual project, sailing a boat to Gaza. They intend to challenge Israel's claim that they no longer occupy Gaza. Talking to her, she explains why she and the other courageous people are going.

Silvia Cattori: Your mission states," We tried to enter Palestine by ground. We tried to enter by air. Now we are going to go by sea." This is an exceptional attempt. Why Gaza in particular? And why go by boat in one of the most patrolled places in the world?

Greta Berlin: Israel says that Gaza is no longer occupied. Well, if that's true, then we have every right to visit. The truth is that Israel controls every entrance into Gaza, and the population is completely isolated from the rest of the world. Internationals can no longer go through the border with Egypt, and, of course, the Eretz border with Israel is closed to almost everyone.

So, 50 to 80 of us, men and women, will begin our journey in Cyprus toward the end of this summer. Many of us are over 50, and we come from all over the world: Palestinians, Israelis, Australians, Greeks, Americans, English, Spanish, Italians, just to name a few. We will embark on a boat called FREE GAZA. One of the passengers, Hedy Epstein, is a holocaust survivor, and two or three Palestinians are Nakba survivors.

Many of us have also been stopped from entering the occupied territories, because we have gone before to non-violently bear witness to what Israel does to the Palestinians.

SC: This departure coincides with the time The Exodus left Marseille for Palestine sixty years ago on July 27, 1947. It had 4500 Jewish refugees on board. Is your trip meant to coincide with that departure in 1947?

GB: It's merely a coincidence. The reason we're leaving in the summer of 2007 is because it's the second anniversary of Israel's 'alleged withdrawal' from Gaza. Since then, Gaza is ever more besieged, and the people are living in much worse conditions. We intend to draw the attention of the world to the terrible lack of human and civil rights for the Palestinians.

SC: To enter the waters of Gaza is not going to be so simple. Do you really believe the Israeli navy will let you in?

GB: Israel has no right to prevent us from going. So we're going. International law says that we have the right to visit Gaza. Remember, in July 2005, when Israel told the entire world that Gaza was no longer occupied? If it's no longer occupied, why shouldn't we go?

Let the Israeli authorities prove that it's no longer occupied by allowing us to enter. This voyage is an attempt to challenge Israel's own words. We've been invited by many NGO's to come and visit their facilities and clinics. Why should Israel have the right to deny us those visits?

Let me repeat. We must do everything we can to bring to the world's attention to the fact that Israel's military blockade is causing the death of the people of Gaza. We clearly know this trip will be difficult, but we're determined. We can either complain about the inertia of the international community, or we can do something to make them sit up and pay attention. If those of us who have already seen the gravity of the situation do nothing about it, then what kind of credibility will we have with the occupied Palestinians?

We've planned this trip for a long time, carefully thinking out the best way to show our support. We discussed the possibility of going to support the right of return for the Palestinians of 1948. Should our journey be a statement about the 60 years of occupation? But we decided it's of utmost importance that we challenge Israel's claim that Gaza is no longer occupied, that its people are free.

According to international law, the waters of Gaza for all 40 kilometers of its coast belong to the Palestinians, and Israel has no right to control those waters. Even the Oslo agreements state that the coast of Gaza belongs to the people who live there.

SC: What do you want to prove?

GB: We want to prove that Israel and the United States are starving the people of Gaza for democratically electing Hamas. We're hoping to call on the conscience of the world, "Wake up. You can't turn away from the crimes of Israel. You can't close your eyes any longer to the slow-motion genocide of the Palestinians.

It's important to show that Israel has lied; Gaza has never been free. Israeli warships still fire on the fishermen, killing many of them over the past two years. What did these men ever do except fish for their families? What kind of evil would make Israel fire on men who had the right to fish in their own waters?

SC: Do you seriously believe that you can face the military might of Israel?

GB: We're going to try. Our mission is to go to Gaza. Of course, we assume that we'll be stopped. However, we're going to insist that we have the legal and moral right to go. And, we have enough media on board to tell the story of what will happen; so let them try to stop us. They'll report that Israel's 'freedom for Gaza' is a complete hoax, The territory is still occupied and its people terrorized every day.

SC: Is your mission more for political reasons then?

Of course, the humanitarian catastrophe is important, but it's vitally important for the people to be free. The international community must step up and help them reestablish the internal structures to build their society. But out mission is to put Israel, the United States, the EU on notice that they bear responsibility for the welfare of 1.4 million people.

SC: This is a great project that you are all launching.

GB: The Palestinians have never received anything with all these 'so-called' peace plans. Every international effort has failed. Part of our desire is to counter the misinformation that has been out there for almost 60 years in favor of Israel instead of the true story of the Palestinians' disspossession.

The world can't wait any longer for Israel to decide when to come to the peace table. Even the NGO's aren't able to tell the true story for fear of losing international support. More than 65 UN resolutions have tried to bring Israel to account; yet the US has vetoed these resolutions every time. For 60 years the Palestinians have waited for justice. How much longer must they pay the price for what Europe did to the Jews? How much longer will the international community turn away and say, "We didn't see, we didn't know."?

SC: Do you hope that other boats and other captains will join you?

GB: Any person who has a boat, anyone who wants to join our breaking the siege is welcome. The more boats that join us, the better our chances are that we will be heard.

SC: Don't you all need a certain amount of courage to launch such a project?

GB: I think that if Hedy Epstein at 82 and Mary Hughes at 73 and so many others in their 70s and 80s can make this trip, so can I. I don't think any of us think we are brave; I think we are determined to have the voices of the Palestinians heard, and if we can help, we have to. We can't turn away as Israel bombs women and children every day.

SC: Why do you care so much for the plight of the Palestinians?

GB: When I lived in Chicago, Illinois I married a Palestinian refugee from 1948. That's when I began to learn the truth about Israel's ethnic cleansing of 750,000 Palestinians in order to establish a Jewish state. As I became more involved in the 60s and 70s, a group called the Jewish Defense League threatened my two small children, saying they would kill them if we continued to work for justice for the Palestinians. For almost 20 years I left the struggle, raising the children and working on my career. I wasn't going to jeopardize their safety for a cause I supported.

In 1997, with my children grown and gone, I started to write letters and advocate again. I couldn't believe that almost 20 years had passed, and the situation for the Palestinians was worse by the day. On September 29, 2000, Mohammed Al Dura, a little 12-year-old boy in Gaza was murdered by an Israeli sniper. Someone just happened to catch the killing on video. I was appalled and returned.

When Rachel Corrie was crushed to death in March, 2003 and Tom Hurndall was shot through the head several days later; both human rights workers with the International Solidarity Movement in Gaza, I made a commitment to go to the occupied territories to see for myself what Israel was doing to a people it occupies.

SC: Isn't the ISM considered to be a terrorist organization by Israel?

GB: Actually, no. Those of us who have volunteered for the ISM are peaceful and believe in nonviolently demonstrating against the occupation. The only terrorism that I witnessed in the five months I was there in 2003 and 2005 was the Israeli military violence against us and the illegal settler violence against the Palestinians and those of us who were trying to protect them. I was shot in the leg by a rubber-coated steel bullet while protesting against that dreadful wall Israel is building. And I, like hundreds of peace activists, have had tear gas and sound bombs thrown at me in Bil'in. While escorting Palestinian children to school in Hebron, settler children threw rocks at us, wounding me in the hand and the thigh.

Almost everyone on board this boat has been beaten, shot, or tear-gassed by the Israeli military. Many of us have been arrested for protecting women and children. Israeli authorities know that we aren't connected in any way to any terrorist organization. But Israel is terrified that we come back to our countries and tell the truth of what happens to an occupied people. That's what they really fear - the truth.

We are all committed to going to Gaza. And we are eagerly awaiting the support of all progressive people to join with us. Even if we don't land, we will have tried, and we will have told the world the situation. I believe that all of the people on the boat feel the same way. We know what the obstacles are. And this is not the only voyage. We will continue to return as part of a strategy of bringing the truth of Israel's occupation to the world.

SC: What do you hope to do once you reach Gaza?