Friday 13th July has been chosen as the date for the 2nd International Day of Solidarity with John Bowden. On that day, around the world, please make every effort to hold an action in support of John and in defence of the Anarchist Black Cross (ABC.) 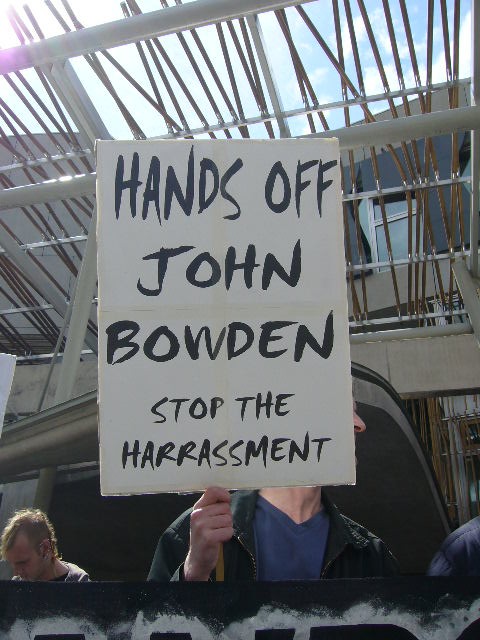 John Bowden is a long-term prison resister who has been at the forefront of the British prison struggle throughout his time in jail – More than 25 years!

After decades of struggle, John has spent the past couple of years in an open prison at Castle Huntly in Scotland. He worked unsupervised in the outside community as a volunteer on projects for the mentally ill and socially vulnerable, and qualified as a literacy tutor for people with learning difficulties. For almost a year John was also allowed frequent home leaves, and was not regarded as any form of risk to the public.

All this recently changed however, when Matthew Stillman, a right-wing American social-worker was brought in to do a hatchet-job on John and accused him of having links with a ‘paramilitary’ and ‘terrorist’ organisation – namely the ABC!

While easily refuted, Stillman’s ludicrous allegations against a legitimate prisoner support organisation have had severe consequences for John, who refuses to renounce his links with the ABC. He has been moved to a high security prison at Glenochil, and damaging allegations (Stillman’s lies) hang over him, which we believe are specifically designed to prejudice the parole board when they consider John’s application for release on licence in August.

The attack on John and on the ABC by the Scottish Prison Service is not only designed to punish a well-known and articulate prison dissenter, it is an attack upon the right of prisoners to hold political views and to seek ‘outside’ support.

Please join us in an international show of strength against the attempt to ‘terrorize’ both John Bowden and the ABC. Let’s make Friday 13th July an inauspicious day for the Scottish Prison Service.

Our solidarity has no limits.