Mamma Mia, it's a game we play!

The Abba musical, Mamma Mia looks like it might not be playing in Israel. As part of a growing backlash against all things British, local theatre companies in Israel are refusing to stage the musical. Angered at the vote for academic sanctions against the zionist state, Israeli pressure groups calling for a boycott of all things British. “The British people should know we are very disappointed in England,” said Otniel Schneller, an Israeli parliament member who helped to draft the Bill aimed at punishing Britain. 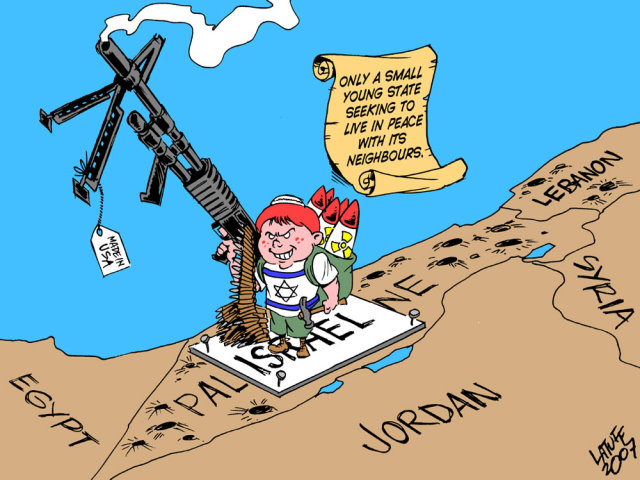 Two narratives - only one truth!

It is worth noting then that zionists think that boycott is a valid way of expressing disappointment with a country, and after 59 years of ethnic cleeansing and 40 years of brutal military occupation (aka politicide, there are many reasons to be disappointed with Israel.

Whilst the inevitable calls of anti-semitism are made against the union and Britain, supporters of the Palestinians seem determined not to be browbeaten into accepting another 4 decades of politicide. In Britain the Enough Coalition has been formed as the largest yet coalition of unions, faith groups, campaigns and NGOs to highlight the 40th anniversary of the Occupation this year, and the 60th Anniversary of the Nakba or "War of Independence" (depending on how cosy you are with colonialism and ethnic cleansing). Similar campaigns are revving up in the USA, Europe and South Africa.

In the media war, recent articles have sought to highlight the validity of the UCU decision. In today's Guardian, Colin Green a professor of surgical science at the University of London outlines his reasons for supporting the UCU:

"My outrage is not fuelled by bigotry or racism, but by what I have seen. I am consumed with anger that I have not come out of the closet many years ago to protest publicly the wickedness I knew full well was going on in the occupied territories.

Without inquiring my opinion about China and Tibet, or Russia and Chechnya, or Darfur and Sudan, critics demand to know why I feel so strongly about Israel. First, it is what I know first hand, initially as sympathiser now bitter critic; second, because Israel does not even pretend to be part of the Orient, but is the one lingering outpost of European colonialism that participates in Euro song contests, football cups, preferential trade agreements, and EU and NATO research grants, and, therefore, has to carry the same human rights obligations and responsibilities we Europeans recently demanded of Serbia; and most important, the Levant has long been historically, and even more urgently so now, the epicentre of world conflict."

And writing for the Israeli Alternaive Information Centre's News from Within, editor Bryan Atinsky wants to know if the authors of a petition against the UCU motion ...

...have written one against the ongoing de-facto Israeli academic embargo against the Palestinians? Where it takes many months to coordinate the permissions from the Israel Civil Administration in the occupied territories—if they are even given at all—for Palestinian academics to come to international conferences, yet it takes perhaps one day to arrange for Israelis to participate. Many barriers enforced by Israel create an effective boycott against exchanges between Palestinian and international academics. And this doesn't include the shutting down of Palestinian universities and the closures and curfews of Palestinian cities and villages. Quite often, even when Palestinian academics get the authorizations, they cannot leave on the day of their flight or get over the border into Jordan, because they can't leave their city or the West Bank/Gaza Strip due to the closures, checkpoints, etc."

In an article from Haaretz, published only in Hebrew,Benny Tziper is all for the boycott.

"However, there is a storm brewing in Israel about the 'anti-Semitism' of British universities who are threatening to boycott Israeli academics. And what about the boycott we impose on Palestinian academics? I think that the boycott the British declared on us is a wonderful thing, because finally some of our arrogant professors will start to feel a tiny drop of the feelings of Palestinian professors, whose academic freedom is routinely crushed under the force of Israeli occupation. Once there were academics like Leibovich, like Plosser, who protested the occupation with harsh words. Where are they today?

The vast majority of the Israeli academy today cooperates with the evil."

For too long we have been bamboozled into having sympathy with the colonialists at the expense of the colonised, and when the brutality of the occupation made that a hard pill to swallow, then we started being smacked with the 'antisemitism' slur. By expressing solidarity with the indisputably oppressed, we were accused of being racist to the oppressors. And as the total onslaught against Palestinian academia, the driving force behind the boycott, was ignored, the Israeli academia became increasingly silent.

The internet has made it much harder for zionists to control what people know about Palestine, and after 40 years there are many, as evidenced by well attended rallies in support of the Palestinian in many cities throughout the world last weekend, who are determined to do something to stop the injustice. Viva boycott and three cheers for the zionist opponents if they are going to speed up the process by imposing a cultural boycott from their side!!!!