As part of the 11th of Every Month Action Campaign, a London 911 Truth group held a protest at Parliament Square, yesterday. 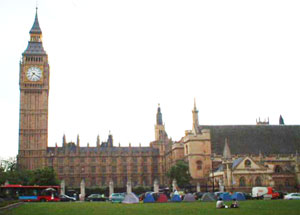 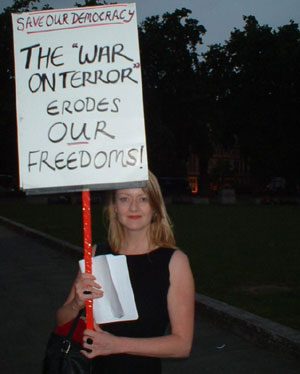 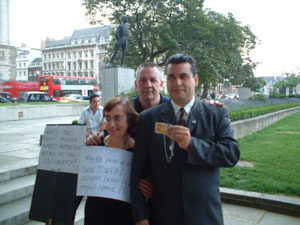 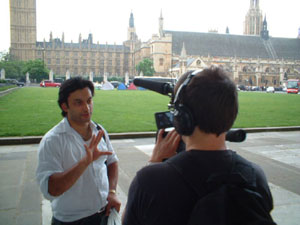 Among the protesters, last man out of the Twin Towers and five times honoured hero, William Rodriguez with ex MI5 officer and co-chair of the 911 Truth Campaign (Britain & Ireland), Annie Machon.

The protesters apparently received a good reception from the general public and the group hopes to double its numbers by next month, when another event will take place, again on the 11th.

http://www.911truthcampaign.net/ , to keep an eye out for events near you see

http://www.nineeleven.co.uk/ and for advice, tips and activism resources see

The latest show is:

"SAVE OUR DEMOCRACY. THE WAR ON TERROR ERODES OUR FREEDOMS"

So did this take place by complying with the SOCPA authorisation procedures or was it a 'real' protest?

I would like to suggest that campaigners do not apply for authorisation in the SOCPA-zone (and stay outside of it if not wanting to risk arrest). How will it be stopped otherwise? One of the arguments used against non-authorised protests by the authorities is to say there are many other people who are applying for permission and therefore able to protest.

Majority of USA people & antiwar movement already think 911 was allowed to happen by "accident" or was deliberately done,with evidence on 7/7 being allowed to happen mounting up too by certain forces , Annie Machon etc seem vbrave.
We only have one planet, but going on about grey aliens seems abit dumb& crazy & Ive met your landlady, plus heard David talks about it too.
WHY?
Check 911 for truth & ex detective Mike Ruppert to verify, he exposed CIA drug running in California also & was a ex narcotics officer in LAPD.

Reply to my own comment. To clarify I am not trying to tell others to risk arrest (they would have to decide for themselves) because there are very real risks in demonstrating without authorisation with possible fines and criminal record. My main argument would be for people to stay outside the area and campaign by saying that they feel their liberties have been taken away and on principle cannot apply for authorisation due to a belief that it is complying with an undemocratic law. It would be good to get 9/11 campaigners (and indeed all political campaigns) on the side of those campaigning against SOCPA 132.

I think the most updated documentaries are